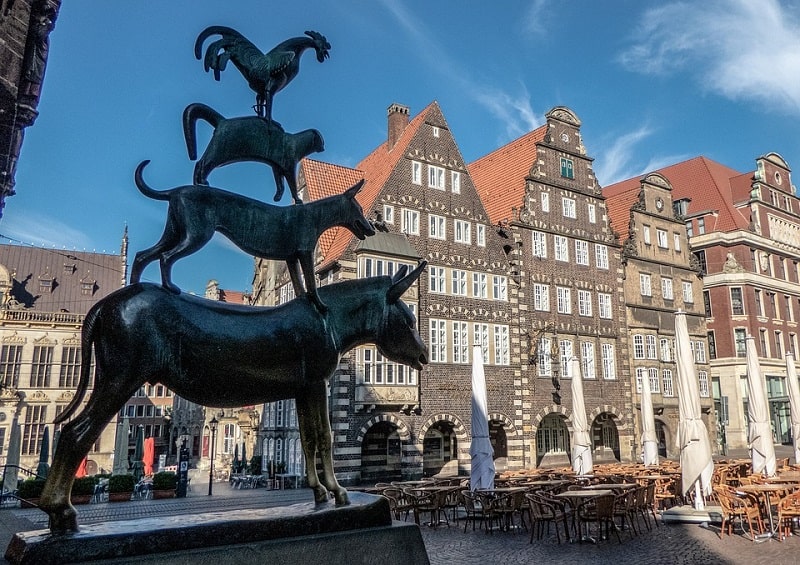 Bremen in North Germany lies at the Weser river and is only about one hour away from Hamburg. It still is a free Hanseatic City. Although with a population of about 550,000, Bremen is the second-largest city in north Germany, the city center is pretty compact, and most of the sights can be reached by walking around or taking a tram.

When you leave the central train station and walk southwards along Bahnhofstrasse and Herdentorsteinweg, you will reach the market in about 10 minutes. For administrative reasons, Bremen has been divided into five city districts and about 23 parts of the town. Most of the sights are located around the central market with its city hall. Just nearby, there is the famous Böttcherstrasse as well as the Schnoor Quarter.

As Bremen in North Germany is located in a moderate climatic zone, the temperatures are rather mild throughout the year. Because of the proximity to the sea, the weather is also due to maritime influences. In winter, there is hardly ever snow.

From the 1st century onwards, there were settlements at the Weser River in North Germany where Bremen is nowadays. The official foundation date of Bremen, however, was in the 8th century.

Charlemagne appointed the city a diocesan town in 787, and in 845, it became an archbishopric that caused the first flourishing of the city. In 1260, Bremen became a member of the Hanse, an important league of trading cities in North Germany and an independent city.

Because the Weser increasingly started silting up, a new part of Bremen was constructed at the western banks of the Weser River between 1574 and 1590. The aggradation also caused problems for merchant ships to land at the docks, and Germany’s first artificial harbor was built at the beginning of the 17th century. Bremen was appointed Free Imperial City.

From 1811 to 1814, Bremen was occupied by Napoleon’s troops. In the 19th century as well, the city played an important role in the development of the German overseas trade and shipping companies were founded. Due to the flourishing economy, Bremen’s population increased considerably.

During the Second World War, Bremen was destroyed to a large extent. In 1947, it got a constitution , and two years later, it became the land of the Federal Republic of Germany. In 2004, the old city hall, as well as the Roland statue at the market, were appointed UNESCO World Heritage.

Like other small cities in Germany, Bremen’s sights are located within easy walking distance from one another and as the city center is quite compact, exploring on foot definitely is the best option. Bremen’s main station is about 10 minutes away from the center, the market.

Of course, there are also bike rentals where it is possible to hire a bike. It is recommended to get a map of Bremen and its surroundings.

Most of Bremen is covered by trams. About 10 tram lines are run by the Verkehrsverbund Bremen / Niedersachsen, the BSAG.

The BSAG also operates quite many regular bus lines. In front of the Hauptbahnhof and near the City Hall, there are main hubs. For more information about lines and timetables, have a look at the website of the BSAG, www.bsag.de.

Points Of Interest In Bremen Germany

The statue of the Knight Roland at the market place in Bremen as well as of course the Town Musicians next to the church Unser Lieben Frauen are the landmarks of Bremen. In 2004, the Roland statue and the Old City hall at the market became UNESCO world heritage.

The Market with an incredible atmosphere and the Roland statue is Bremen’s center. Most of Bremen’s sights are located here.

When you leave the central train station and walk southwards along Bahnhofstrasse and Herdentorsteinweg, you will come across the first sight of Bremen that is really beautiful. It is a Dutch windmill and gives you the first impression of the lovely character of Bremen.

Recommended For You:  Discover Cyprus with a Buggy

Walking further you will reach the city center and the main sights, most of which are clustered around the famous market of Bremen.

The statue of the Knight Roland at the market place in Bremen is not an only landmark and UNESCO world heritage, but also the center of Bremen. Unfortunately, the original head of the statue with a height of 5.5 m was removed in the Second World War and replaced by a copy. The original can still be seen in the museum of the Dom St. Petri. This cathedral opposite the Roland was constructed in the 11th century and dominates the market.

The Old Town Hall is also located at the market next to the Roland statue. It was first constructed at the beginning of the 15th century. Its beautiful balcony of Renaissance style was added 200 years later, between 1595 and 1618.

The ultimate landmark of Bremen nearly everyone knows is the statue of the Town Musicians in front of the church Unser Lieben Frauen. Based on the famous fairy tale “Bremer Stadtmusikanten” by the Grimm Brothers, it was cast by Gerhard Marcks in 1951 and shows a dog, a cat, and a rooster all on top of a donkey. Touching the donkey’s nose is supposed to bring luck. Although overpowered by the impact of the quite tiny statue, the Kirche Unser Lieben Frau next to the Town Musicians is also worth a visit.

Opposite of the Old City Hall is the Schütting that used to be the house of the merchants. The three houses at the west side of the market are 19th-century buildings and opposite them in the east, there is the only modern building of the market, the Haus der Bürgschaft.

When you enter the small road right off the Schütting, you will be stunned. The Böttcherstrasse is one of Bremen’s most famous streets for a good reason. Built between 1922 and 1931 in Art Noveau style, it has not only two stunning entrances, but also really beautiful redbrick houses, galleries, shops, and cafes, many of which have been designed by Bernhard Hoetger. Some of the houses are worth a closer look, e.g. the PaulaModersonBeckerHaus near the entrance, the Roselius house of the 16th century (which was therefore not designed by Boetger) as well as the Glockenspiel house. Luckily enough, Böttcherstrasse was saved from the bombings during the Second World War and therefore not destroyed.

South-east to the market, there is probably Bremen’s oldest quarter, the Schnoor. It used to be a maritime and then a redlight district. With its small and narrow lanes, many restaurants and cafes as well as small shops and boutiques, it is not only loved by tourists but also by locals. As there are still many houses from the 17th and 18th centuries which have not been destroyed in the wars, you will also get an impression to live in earlier days. At the outer edge of the Schnorr, there is the catholic church St. Johann.

Recommended For You:  How To Tick Off Extra Countries On Your Eurail Trip

There are events and festivals in Bremen throughout the year. Some of them are quite large and renowned and should not be missed.

On January 6th, the traditional “Eiswette” takes place every year at the Weser River in Bremen. A tailor with a glowing iron tries to cross the river without getting wet feet. The first “Eiswette” was held in the year 1829.

Also, an important tradition in Bremen is the Schaffermahl in February. Since 1952, it has been carried out every year in the city hall of Bremen.

In February as well, there is the carnival. The Bremen carnival is one of the most important festivals of the city and not typically German at all.

The Breminale at the “Osterdeichwiesen” in Bremen first took place in 1987. During this cultural event every year in September, thousands of people meet for theater, literature, music as well as events for children. Unfortunately, there is a problem with the financing of the Breminale at the moment and no one is sure whether this important festival will survive. But people are fighting for it!

The Festival Maritim takes place every year in the Bremen area Vegesack in August. For three days, thousands of people come together in the harbor area and national as well as international bands are presented. As this festival is unique in Germany, you should not miss it when you are in Bremen at that time.

In September every year, the Musikfest Bremen takes place. It is one of the largest festivals of classic music in Germany. The program includes performances of contemporary and historic music as well as international artists and has been increasing since its establishment in 1989.

The Freimarket in Bremen is one of the oldest public festivals in Germany. It dates back to the Middle Ages, i.e. the first Freimarkt was held on October 16th, 1035 on the court of the church “Unser Lieben Frauen” when people were allowed to sell their goods on the market without any restrictions. About 800 years later, funfairs and tents were introduced on the market. Now, the Freimarkt takes place every year for two weeks in October and is not only one of the oldest, but also one of the most popular German public festivals.

Bremen has a wide range of hotel options including hostels, pensions, and hotels. To avoid disappointment, we suggest you book your hotel in advance.

Recommended For You:  Riga Guide, Latvia – The Paris of the Baltics – Part 1