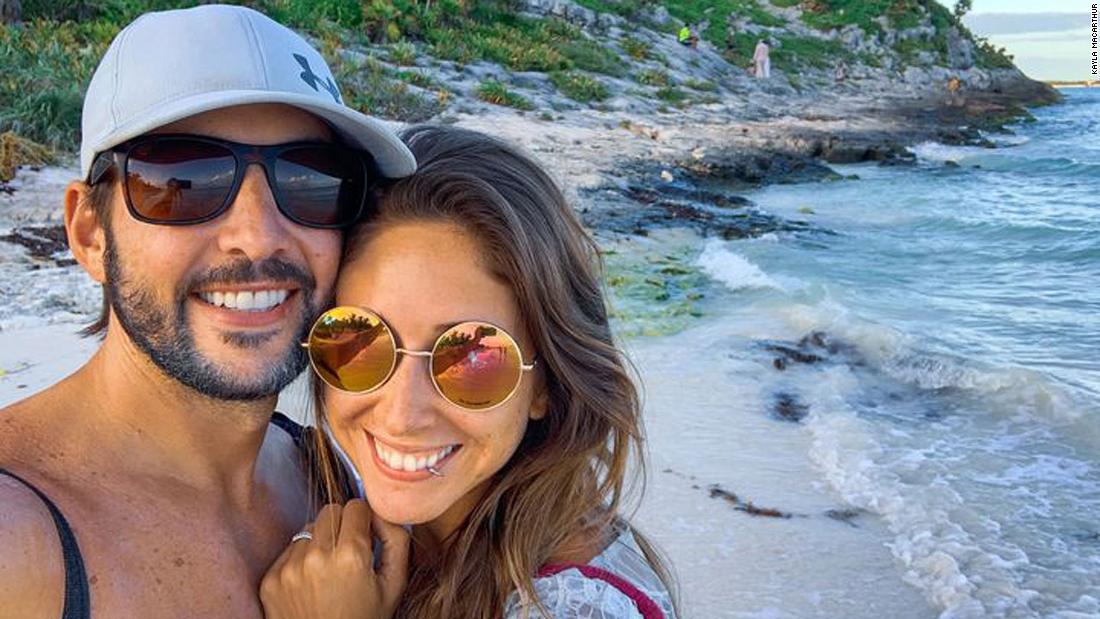 But that didn’t stop life coach Kayla MacArthur from taking a chance and booking an Airbnb apartment in Tulum, Mexico with a virtual stranger.

The 31-year-old from Massachusetts had been feeling disillusioned about the prospect of meeting someone while many Americans were under instructions to stay at home, when a friend decided to step in and play matchmaker.

“I was ready for love but loathed the idea of swiping left and right on dating apps,” MacArthur tells CNN.

“I prefer to sense a person’s energy, but with all the restrictions due to Covid-19, part of me accepted that it was highly unlikely I’d meet the man of my dreams in 2020.”

In June, a mutual friend named Ben arranged a Zoom call between her and Ryan Crain, a 35-year-old wellness manager from Oklahoma, saying he thought they’d hit it off.

“When Ryan’s face appeared on my screen, I felt attracted to him,” MacArthur admits. “As we spoke, I realized he was as passionate about traveling as I was — before lockdown he went on a solo trip around the world.

“We had lots in common but it wasn’t as if we could meet up and hang out.”

Crain also felt an instant attraction to MacArthur and says he was on a “huge high” after speaking to her for the first time.

“Although I went into the conversation thinking it would be more of a friend connection, I did immediately notice how beautiful she was and I was very attracted to her,” he says.

“She had just returned to the US from living in Bali so I knew she was like minded.”

While Mexico has remained open to US visitors arriving by air during the pandemic, the US Centers for Disease Control and Prevention currently advises against visiting because of the Covid risk. Over the holidays, the USCDC also advised against travel within the United States.

“A few weeks later, when both of us were fed up with being at home, we decided to go together,” she explains.

Kayla MacArthur and Ryan Crain had never met before they booked an Airbnb together in Tulum, Mexico.

Although they knew it was a gamble, the pair decided to throw caution to the wind and book a two-bedroom Airbnb property in the coastal town Tulum, based on the Caribbean coastline of Mexico’s Yucatán Peninsula, for one month.

“We decided to go as travel buddies although deep down I think we were both hoping for something more,” says MacArthur.

“Living together would be the ultimate test — we’d know whether there was mutual chemistry and we’d really get to know each other.”

After making the necessary arrangements, MacArthur and Crain flew to Cancun separately on August 8.

They landed at different times, and didn’t see each other face to face until they were at the apartment.

“When we met for the first time in our Airbnb living room, I remember thinking that she had a glowing energy,” Crain says.

“She had bought me a dozen eggs and some fruit for breakfast from the day before, since she knew I would be getting in late. She was kind and thoughtful.”

They quickly talked about their expectations for the trip, and agreed to communicate with each other if either was annoyed or upset about anything.

“I wanted us to use this trip to grow as individuals and practice conscious relating,” says MacArthur. “Luckily Ryan was totally open to this.”

After two weeks of enjoying each other’s company and a magical trip to Isla Mujeres, Crain told MacArthur he had fallen for her and asked to take her on a date.

Although they decided to extend their stay, MacArthur’s remained uncertain of her feelings until Crain left for a week-long trip to Akumal, a small town on Mexico’s Riviera Maya, at the end of September.

“While Ryan was away, all the pressure disappeared and I realized just how much I missed him,” she says.

“During our time apart, I became clearer about my feelings — I wanted to give this a chance.”

When he returned, they officially became a couple and returned to the public beach in Tulum, where they’d had their first date.

The twosome then witnessed a double rainbow forming over the ocean. MacArthur says she interpreted this as a sign that they would go the distance.

But their relationship was repeatedly put to the test over the next few months.

Not only did they experience unrelenting noise from nearby construction, the couple lived through three hurricanes, as well as Tropical Storm Gamma, which brought floods, and landslides to the Yucatán Peninsula, leaving them with no electricity or water for four days.

“It might’ve looked glamorous to friends and family but there were practical realities to living there just like anywhere else,” says Crain.

“I simply tried to go with the flow and make the most of it. So when the power would go out for 24 hours, I would turn the music on, light some candles and dance around like a dork to make her laugh.”

MacArthur’s ATM card was later swallowed up and she developed a parasitic foot disease, which left her unable to walk properly.

She was prescribed strong medication by doctors, but felt exhausted most of the time and couldn’t leave the apartment. However, Crain proved to be a great support throughout.

“Ryan was really thoughtful and affectionate the whole time, getting me ice cream and also picking up medicine for me,” MacArthur says.

Both say the trials they faced while in Mexico have only made their relationship stronger.

Once MacArthur had recovered, the couple spent the next two months traveling to the Mayan Ruins of Chichen Itza and Bacalar, dubbed the Maldives of Mexico, while planning their future together.

The couple spent the holidays in Boston with Kayla’s family and are looking forward to more adventures together.

They decided to return to the US together in December to spend Christmas and New Year’s in Boston with MacArthur’s family.

But the couple admit their whirlwind romance has received mixed reactions from friends and family.

“Our parents were thrilled,” says MacArthur. “But some of our friends were concerned. ‘You and Ryan are great together but when this vacation is over, you may encounter some problems’ and ‘When are you coming back to reality?’ were some of the things they said.”

“I smiled because Ryan and I have overcome quite a few obstacles. We are both committed to building a future together. I truly feel like I’ve found my person.”

Crain says he feels the same, and is hugely thankful that they opted to book that Airbnb over the summer.

“Kayla has helped me to be more open, vulnerable and authentic and I’m so grateful we took this chance together,” he says.

Although Covid-19 has no doubt brought much misery to the world, MacArthur says finding love during such a turbulent time has shown her that life can unfold in the most unexpected ways.

“I always hoped to find the love of my life but I had no idea it would happen so quickly and during a global pandemic,” she adds.

While ever-changing border restrictions continue to limit travel, the couple plan to go off on more adventures together in the future.

“We plan to travel together and spend some time in San Diego, Lisbon, and Costa Rica — that’s our dream,” she says. “Perhaps we’ll even make it back to Mexico one day.”