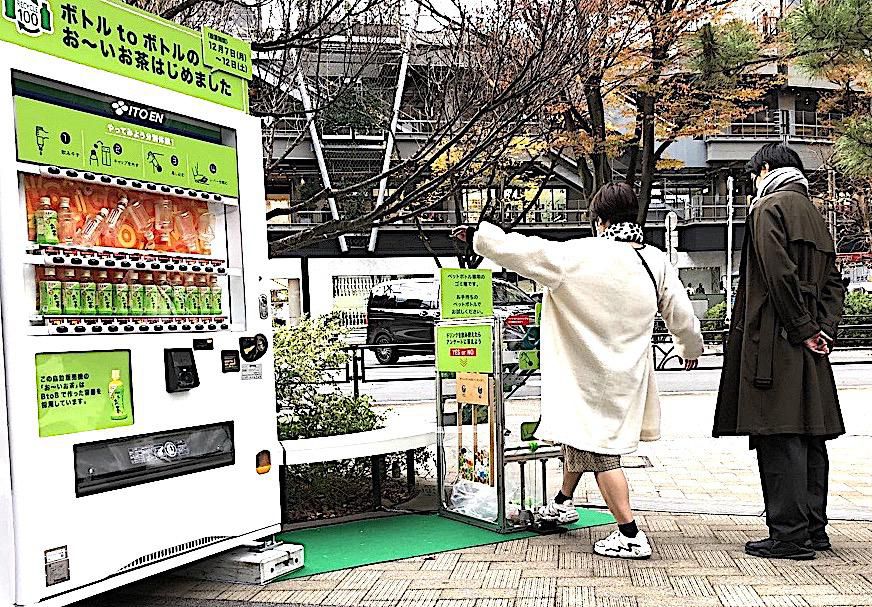 Japanese people are great at recycling. According to the Council for PET Bottle Recycling of Japan, 593,000 tons of PET bottles were sold in 2019. 93% of them were collected and 85.8% were recycled.

These numbers are significantly higher than in the U.S. where only 27.9% of 2.89 million tons were collected and 19.7% were recycled in the same year.

But Japan is trying even harder. From December 7 to 12, ITO EN, the global tea company headquartered in Tokyo, placed an inventive recycling bin called “Tsubuseru Recycling Box (Crushable Recycling Box)” in a busy section of Tokyo, as an experiment.

Unlike regular recycling bins, you can see through the inside and there is a machine that vacuums out the air and compresses a PET bottle in 20 seconds.

(WATCH THIS VIDEO to see how the Crushable Recycling Box works. Skip to seconds 21-37 if you wish.)

“Instead of asking consumers to recycle PET bottles without telling them what exactly they should do, we wanted to present the right way to do so with some entertainment,” says Aiichiro Yamaguchi of ITO EN’s Public Relations Department.

Along with other beverage companies in Japan, ITO EN has set a goal to recycle all PET bottles by 2030. To achieve this concept of “Bottle to Bottle”, the public needs to understand that anything other than PET bottles must be eliminated from the recycling process.

According to the Japan Soft Drink Association, however, 30% of the contents in recycling bins are non-PET bottle items and 40% of consumers do not know that PET bottles need to be separated from any other recyclable articles.

Reactions from users of the Crushable Recycling Box were positive and encouraging. Over the six days, 270 bottles were processed in the box and there was only one non-PET bottle item per day on average that was dropped into the box.

Yamaguchi says, “The majority of the users approached the box out of curiosity and tried it. We heard them say “Wow!” and “Interesting!” so many times. Some of them even came back with more PET bottles to use the box for fun.”

ITO EN also did a simple questionnaire with PET bottle caps to research consumers’ knowledge as well as to educate them. Before putting a bottle into the box, the user was asked to answer a question if they knew what bottle-to-bottle meant. They answered by dropping the cap into the panel of either “Yes” or “No” attached to the box. Only 44% of the users responded yes.

ITO EN’s staff also interviewed users of the box, who were mainly between in their 10s and 30s, and found that people older than teenagers were less familiar with the concept of bottle-to-bottle.

The Crushable Recycling Box happened to be placed near middle and high schools. “We were surprised that the younger generations were very interested in environmental issues and willing to spend time to understand what we were trying to do with the box and beyond,” says Yamaguchi.

One of the teachers at the school nearby asked ITO EN if they could collaborate on a program to educate students about environmental protection and now the company is working on it.

ITO EN does not disclose the exact number but the box cost a few thousand dollars to make.

The company is planning to place the box at selected locations as a tool to educate the public about the bottle-to-bottle concept such as schools and government offices. It may build more boxes to expand educational activities beyond the Tokyo metropolitan area.