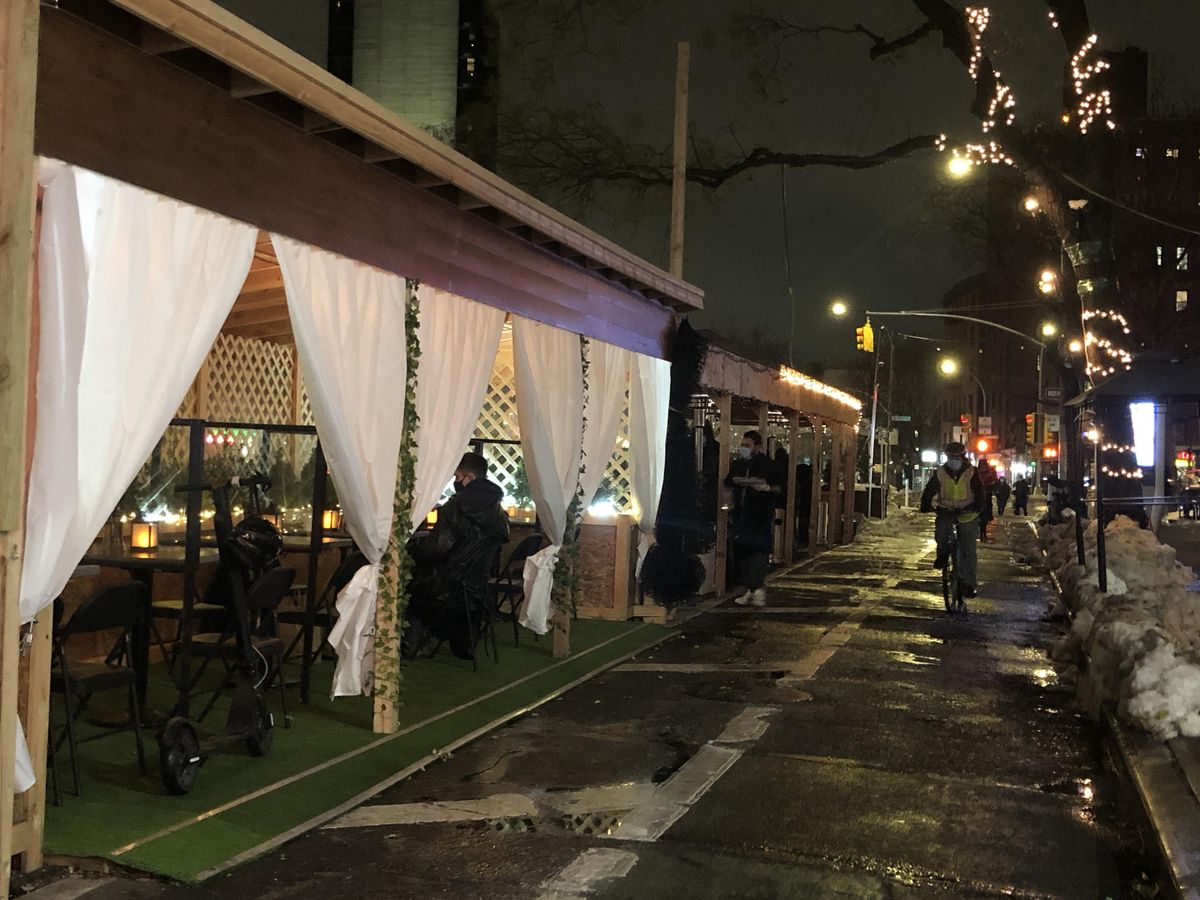 Enough is enough for Marc Forgione.

The chef and owner of Peasant and his namesake restaurants in New York shut his popular eateries indefinitely one after another in the past 10 days following the city’s decision to ban indoor dining amid reports of coronavirus case spikes. The wintry weather and the city’s first snowstorm also played a part in his decision.

That was despite the fact he had spent $30,000 this year to build two outdoor dining structures with heaters and electricity. Just last month, he bought outdoor curtains as the weather turned colder. He had also put in air filters before the city had allowed indoor dining with a 25% capacity at the end of September following months-long shutdowns.

“Nothing in the last 8 months has been real,” Forgione said in an interview, adding delivery and takeout alone weren’t enough to sustain the restaurants being open. “It was mentally trying as it was physically. For the entire summer and fall, we built 60-seat outdoor dining everyday. It’s like setting up a circus every night. It just took a toll on everyone. It was a mental warfare….We also knew winter was coming.”

At its best with outdoor dining, the business was doing half of what it would have done without the impact of Covid-19, he said. Indoor dining, even with a 25% capacity limit, was better than none.

“It was enough to keep us open and pay some bills,” he said, adding landlords for both restaurants have been able to give him some break. “There was no profit. The reason I did what I did. There was not one second it’s done for profit.  I couldn’t not try for my (about 70) employees. They need money. Every single place that stayed open was to pay their employees…Every chef has tapped into his personal savings to help his business.”

Forgione, who has started a GoFundMe to raise money for his employees, isn’t alone. Across town, some restaurants that could be seen doing brisk outdoor-dining business when the weather was warmer also closed doors recently following the city’s latest indoor-dining ban. They sat darkened alongside many others that have permanently closed.

New York’s iconic 90-year-old 21 Club, which has shuttered its doors since March, said recently it will close indefinitely.

New York’s mandate comes as the state government’s own contact- tracing data this month showed that just 1.4% of new coronavirus cases come from restaurants and bars, compared to 74% from private household gatherings.

The indoor dining ban “will be the last straw for countless more restaurants and jobs,” the New York City Hospitality Alliance said in a statement this month.

The restrictions from New York and some other cities including Chicago, along with California’s stay-at-home orders that ban even outdoor dining, are battering a sector that before the pandemic was consistently a retail industry outperformer.

More than 110,000 establishments, or 17% of restaurants, are closed permanently or long term, according to a November survey of 6,000 restaurants and 250 supply-chain businesses by National Restaurant Association. The vast majority of permanently closed restaurants were well-established businesses, and fixtures in their communities, the trade group said. On average, they had been in business for 16 years, and 16% had been open for at least 30 years.

Indeed, while some fast food and fast casual restaurants like Chipotle are still reporting sales gains driven by takeout and delivery business, results from Olive Garden parent Darden
Restaurants painted a sharp contrast. The world’s largest full-service restaurant operator recently reported a near-20% same-store sales drop at Olive Garden and an 11% decline at LongHorn Steakhouse as new dining restrictions led to uneven performance between locations with and without the lockdown restrictions.

While Olive Garden and LongHorn were making up some of the shortfall with increasing online orders for off-premise sales, Darden’s fine-dining segment including The Capital Grille saw sales slide 31%.

Related on Forbes: How Peloton’s $420 million Precor deal will bulk up its business