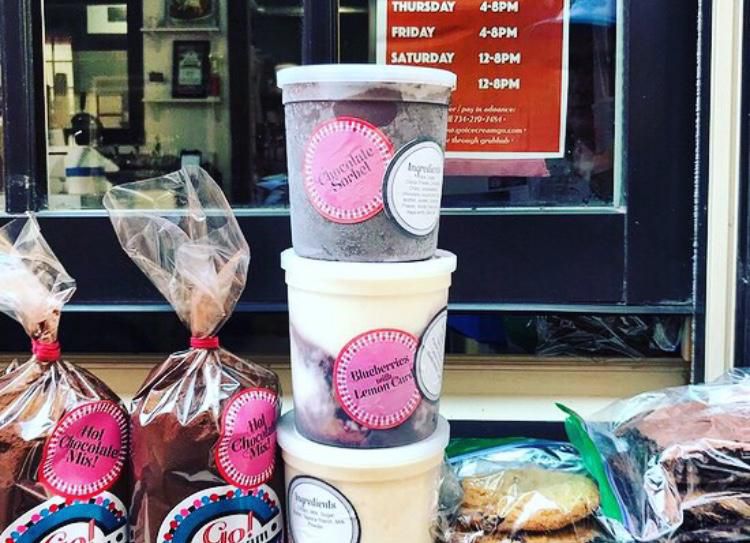 Normally, at this time of year, I’d be making a trip to Chicago to see the city’s Christmas tree, or taking the train to Toronto for some shopping and dining.

This year, I’m not going anywhere — just like much of 2020. Leaving Michigan has been off limits for me since the pandemic began, and that’s affected my ability to list my favorite dishes of 2020.

But, I’ve discovered some treats, thanks to a little indoor dining and a lot of carry out. And I’ve also gotten to watch some enthralling and comforting food television. Here is my list.

Go Ice Cream Chocolate Sorbet. In February, my friend Margaret Petersen and I set out to find the best local plant-based ice creams for my story in the Ann Arbor Observer.

We found one of the best at Go Ice Cream, a small but growing business in Ypsilanti, Mich., Rob Hess’ chocolate sorbet is creamy, chocolatey and sweet, but doesn’t have a drop of dairy.

You can find it at markets in the Ann Arbor area, or by ordering ahead and picking it up at Hess’ window in a downtown Ypsilanti alley.

Sweetwater’s Donut Mill Boston Cream Pie Donut. In August, I made one of the longest trips I took all year to Battle Creek, Mich, about 85 miles away.

I was picking up the six free donuts that Sweetwater’s Donut Mill gives you on your birthday, with the purchase of another six.

The Boston Cream Pie donut is worth the drive. The donut is deliciously yeasty, the cream filling is like the creme patisserie you see on The Great British Bake Off, and the chocolate icing is lick—it-off-the-top worthy.

If that’s not your style, you can choose from 54 other flavors.

KPOP Foods Honey Glaze sauce. Earlier this year, flavorist Donna Wamsley predicted that Korean flavors were about to head into the mainstream.

That prompted Theo Lee, the co-founder of KPOP Foods, to offer some me samples of his Korean-inspired sauces.

Three of them are based on gochujang, the traditional Korean chili paste that’s a popular ingredient and condiment. The Honey Glaze sauce is dynamite, to quote BTS.

It’s sweet and hot, and I’ve used it on everything from roast cauliflower to rice and salmon. It would be great on a burger, and of course, on barbecue, whether Korean or American.

Cases of COVID-19 were climbing, and we all figured Michigan would join Ohio and other states in issuing a stay at home order. I wanted one last meal at the counter, where I ate almost every week.

The fried chicken was crisp on the outside, juicy on the inside, and the waffle was both crispy and tender. I waved to the kitchen staff, and took selfies of them and the food. Sure enough, the state shut things down the next day.

I’ve eaten Roadhouse food since, but mainly from carry out boxes. The counter where I liked to sit has remained closed. But I fondly remember that last meal in normal times.

Ricewood brisket tacos. Before the pandemic, I had discovered Ricewood BBQ in Ann Arbor, which operates out of a window inside York, a gourmet store and cafe. Ricewood has been winning awards for its rice bowls, topped with barbecue meats, Asian sauces and condiments.

As a special, Ricewood offers brisket tacos on Thursday. They’re nice and flavorful, and you can get side dishes like sesame cucumbers, kimchi and red cabbage slaw.

Since it’s all take out, you can use York’s outdoor seating, or look for a nice spot around Ann Arbor to enjoy your food. I often found a picnic table at a nearby park.

Somebody Feed Phil, Season 4. Phil Rosenthal lives a charmed life. He was the executive producer of Everybody Loves Raymond, which maintains a loyal following 15 years after it went off the air (it lives on in continuous reruns).

Several years ago, he launched a series on PBS called I’ll Have What Phil’s Having. To put it gently, the concept was good, but the show needed some work.

There were an awful lot of corny jokes, and many critics wondered why Rosenthal got a food show when he’s not a chef or a cookbook writer.

However, he clearly loves dining and travel. Over the years, he’s eliminated some of the eye-rolling jokes and focuses on the people, places and dishes that he profiles.

As a result, he’s brought attention to locations and local purveyors, whose business has been boosted by his loyal band of fans.

I’ll forever be grateful to Rosenthal for this season’s episode in the Mississippi Delta which features the late Julia Reed. Her death this summer saddened so many of her friends and admirers, who deeply miss her witty writing about the South.

This series also takes viewers to Singapore and to Seoul, where another one of my favorite shows this year is set.

Hello! First Time In Korea, Finland. My friend Luke Song, the noted milliner, was born in South Korea and avidly keeps up on shows from his birthplace. During the pandemic, he’s sent me links to shows he thinks I might enjoy.

One is a series called Hello! First Time In Korea. It’s a pretty simple premise: a foreigner living in Korea invites three friends from their home country to visit. A camera crew follows them around Seoul and to spots around the country, as they sample Korean culture.

Episodes of the show can be found on YouTube, with English subtitles. Hands down, the most popular visit was by three young men from Finland, who came to see their friend Petri, an entrepreneur and official at the Finnish embassy.

The trio – Vili, Vilppi and Sami — enchanted Korean viewers with their love of the country, especially its food.

The program is a master class in all manner of Korean cuisine, from chicken and beer to live octopus and the sprawling variety of Korean table d’hote.

The Finns were such a hit that they were invited back to film a second series, and all the episodes have significant food elements.

You can find clips of just the eating sequences, but you shouldn’t miss the charm of the friends exploring South Korea.

With his book tour scrapped by the pandemic, Lebovitz became one of the many writers and chefs who offer Instagram Live presentations. His have featured his drinks, food, his hilarious partner Romain, and various culinary guests.

Street Food Latin America and Flavorful Origins. Both these programs are available on Netflix
, and they’re culinary educations in places that aren’t often seen in food documentaries.

Street Food Latin America is the successor to Street Food Asia, and depicts a number of chefs, cooks and vendors across South and Central America. Many of those featured are women, and many have plied their trades for decades.

One takeaway is just how hard these cooks and vendors work to produce their authentic dishes.

Flavorful Origins is a series of vignettes on dishes in different regions of China, easily binge-able. In Series Three, the filmmakers visit the sprawling Gansu province in Northwest China.

You will see everything from hand-pulled noodles to mutton, lily plants to buckwheat, and up close views of all the steps that are required.

Hopefully, by this time next year, we’ll be able to travel to China, or Paris, or Seoul, and taste all these dishes for ourselves.