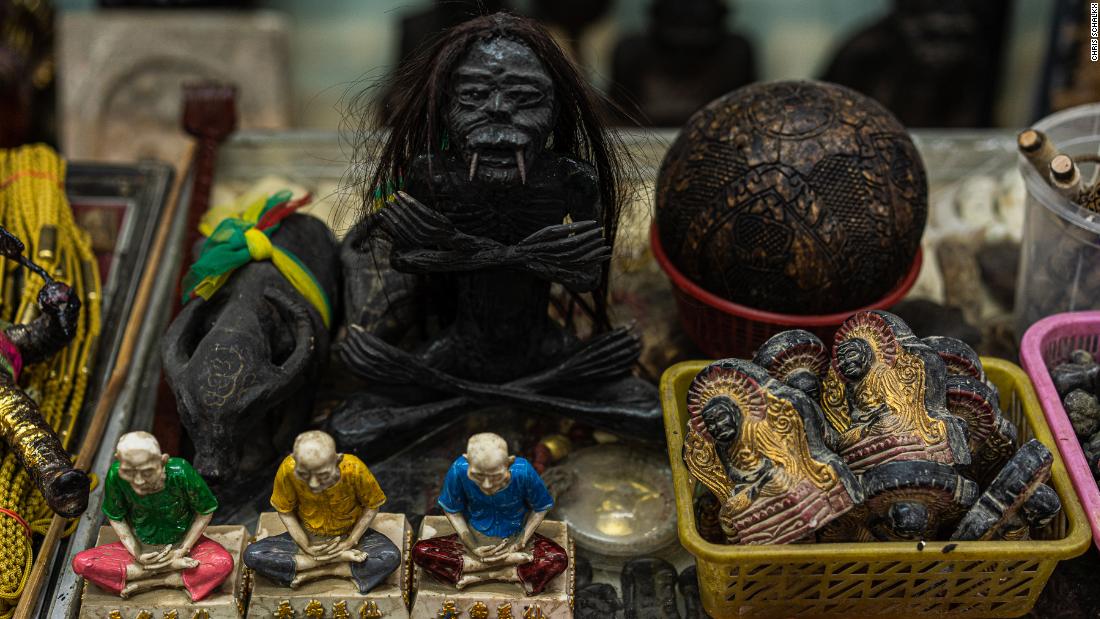 Bangkok (CNN) — “You are not coming home before you’ve cleansed yourself at the temple,” my wife says. She might not be Thai, but has seen enough Thai horror flicks to know that one does not mess around with the local spirits.

And that’s exactly what I was about to do, on the walking tour I signed up for: “Ghosts, Spirits, and a Little Bit of Dark History” led by Justin Dunne, a Californian who, for more than 10 years, has been scouring Bangkok’s back alleys for ghostly encounters and, in his words, “vibrationally challenged places.”

In the email exchanges leading up to the tour, Dunne warns me no less than five times that his walks are “exceptionally draining — both physically and emotionally.” They’d take around 10 hours, and would bring us to places that “just don’t feel good.”

Despite being a staunch non-believer in the supernatural, these repeated warnings leave me with a funny feeling.

So, with a slight knot in my stomach, I meet Dunne on a Sunday morning at the Saphan Taksin pier, one of the main transport hubs in Bangkok’s oldest district.

Before we set off, I sign a waiver confirming that “any ghosts or black magic that attaches themselves to me will be my own responsibility.” Dunne also hands me a black crystal, “charged with good ju-ju” by his Reiki-master wife, and instructs me to keep it in my pocket.

Shrunken heads on display at the Tha Prachan amulet market.

Our first stop is the Tha Prachan amulet market, a labyrinthine network of market stalls on the banks of the Chao Phraya river.

At one shop, hundreds of figurines stare me down from rickety shelves. Clay babies with red diamonds for eyes. Black wooden creatures with long fangs and witch-like hair. Deformed lizards preserved in vials of brownish oil. A luk thep, an unsettlingly realistic baby doll believed to bring good luck to its owner, guards the lot.

We cross the road to Thammasat University, the site of one of the bloodiest chapters in Thailand’s modern history. Here, on the morning of October 6, 1976, right-wing militia violently cracked down on a leftist student protest, resulting in a massacre with an estimated death toll of more than 100.

Some students sought refuge from the violence in one of the elevators of the Faculty of Liberal Arts, only to be shot when the army discovered them. Later, the university painted the elevators red to mask the blood stains. Rumor has it, Dunne tells me, that many former students and professors have had otherworldly encounters when taking the elevator at night.

Is that a face spying on you from the forest?

The tour continues with a tuk-tuk ride to a hotel not far from the Grand Palace. Dunne tells me its meeting rooms were used as makeshift morgues during a violent pro-democracy protest in 1992. At another time, a six-year-old girl disappeared here during a bathroom visit. She has never been found.

The hotel remains in operation, though it has clearly seen better days. Tripadvisor reviews describe it as “Bangkok’s version of The Shining.” To this day, Dunne says, guests and staff hear toilets flushing throughout the night or see deceased protestors looking back at them in the mirror.

A few blocks away, a clandestine “short-time” hotel offers an even more hair-raising backstory. On some nights, the story goes, the notoriously feared spirit Phi Krasue, appearing as nothing more than a floating woman’s head with dangling entrails, roams the grounds to feast on flesh and feces.

Drawing on Buddhist beliefs and folk tales, these spirits, or phi as they’re called in Thailand, are widely believed to lurk around abandoned buildings and ancient trees. There are dozens of them, missing limbs, heads, mouths or eyes. Some have good intentions. Many don’t.

To stay out of spiritual trouble, Thais set up spirit houses all around the country. Little temple-like shrines on stilts, they’re placed near office buildings, markets and auspicious corners around the house. They’re festooned with flower garlands, joss sticks and colorful figurines. Many Thais make daily food offerings (usually accompanied by a bottle of red Fanta, a more humane alternative to blood) to keep the spirits appeased.

While we scan the hotel grounds looking for clues pointing to Phi Krasue’s visits, I notice the staff getting visibly agitated. At times, it feels like we, two white-skinned farang (foreigners), are seen as the curious spirits roaming the premises. “It’s part of the fun,” Dunne says. “Sometimes we get kicked out — people rather not have us poking around for ghosts.” This is why he keeps his groups small, four persons at most, and occasionally slips the security guards a few baht.

We stop at desolate shopping malls, former prisons, abandoned nightclubs and an allegedly haunted cinema with a screening room so dark and fetid, it feels like I’m being smothered by a moldy towel. Dunne tells me that on one of his tours, a guest saw someone stare at her from the balcony.

It’s nearing 8 p.m., and our final stop is an old walk-up apartment building on a dimly lit side street. Dunne informs me that one of the rooms used to be a back-alley abortion clinic. “One of my previous guests felt something pull his hair here,” Dunne says, pointing to a wooden staircase. “He went home right away.”

As we climb the stairs, I avert my eyes from the wall-sized dusty mirrors beside it. Upstairs, a row of windowless doors line a hallway lit by fluorescent tubes. Some have shoes in front of them, others look empty. A wooden contraption with a big lock closes off the stairwell to the pitch-black next floor. If we were carrying a ghost frequency detector, I’m sure it would’ve been beeping excessively by now. I realize what Dunne meant with “vibrationally challenged places.”

At dinner, I learn that a bowl of slippery noodles just isn’t as tasty following an afternoon of stories filled with disemboweled bodies and bloodied corpses, and I reward myself with an extra dessert in an attempt to shake off the jitters.

On my way home, my wife checks in to make sure I stop off at a temple first. I didn’t. But I did offer a bottle of red Fanta to our neighborhood spirit house. Just in case.

Bangkok Haunt hosts Ghosts, Spirits, and a Little Bit of Dark History tours on selected Saturdays and Sundays. The tours cost 2,500 THB per person, and can be booked via bangkokhaunt@gmail.com, or +66 813 41 3206

Chris Schalkx is a Dutch writer and photographer based in Bangkok and Taiwan. He writes about travel, sustainability, and design — preferably all three combined.