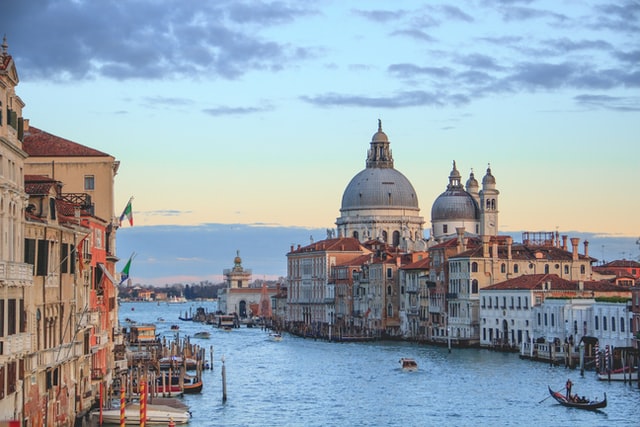 Venezia, La Serenissima, Queen of the Adriatic, the Most Serene Republic of Venice is the city of canals, churches and palaces that captures the hearts and minds of all who visit. Venice is home to wonderful tourist destinations famous the world over – St Mark’s Square, Rialto Bridge, the Bridge of Sighs – but the true joy of Venice is found just wandering around and finding architectural and artistic wonders around every corner.

Venice is served by two airport, Marco Polo and Trevino. Transport into the city is by bus or from the latter by water bus.

Trains terminate and depart from Santa Lucia train station on the west side of Venice. The station fronts the Grand Canal where water buses (vaporetti) or water taxis are available.

Cars and coaches arrive on the far western edge of Venice at Piazzale Roma.  There are no roads in Venice so from here on it’s by boat or on foot. Venice is the World’s only truly pedestrian city and walking is a serendipitous adventure of discovering vistas in the magnificent urban landscape.

Ships arrive at the Stazione Marittima.

Water buses are best for longer trips and for visiting the islands. There are also the more expensive water taxis. Gondolas are really just for short romantic hops and having your photograph taken.

Summer is hot in Venice. Temperatures average 27°C but high humidity results in a close, uncomfortable atmosphere. Sometimes, hot sirocco winds sweep in from the south. January and February are the coldest months with temperatures ranging from 0-7 C. Snow is rare owing to the city’s lagoon location. Spring is fresh and clear though rainfall can be heavy. Mists are common in late autumn.

Check on the internet for the range, location and cost of  Venice hotels

Venice has the character of a stage set so its many festivals are spectacular.

* The first event of the year is the Regata delle Befana held on 6 January.

* The next month sees the major event in the Venetian calendar namely Carnevale,

which is a masked and costumed extravaganza.

* May sees the Festa della Sensa (Feast of the Ascension) which celebrates the Sposalizio del Mar (Wedding with the Sea).

* The arts fest is held every odd-numbered year in June in the Giardini Pubblici.

Turin has been called the European capital of Baroque due to the style of many of its palaces and churches. In many ways Turin differs from the typical Italian city. It exudes a strong French influence with its broad boulevards with white buildings. With the Po River flowing through the city, and the Italian Alps standing in the distance, it’s a place of great charm.

Caselle Airport lies north of the city and is connected to the city by bus and taxi. Turin is also easily reached from Malpensa airport.

Turin has two main railway stations, Porta Nuova and Porta Susa. The former is for long and mid-range trips the latter mainly for local trains.

Turin has an efficient public transport system of buses and trams and an underground line was opened for the 2006 Winter Olympics.

The City of Turin has recently established a network of bicycle paths throughout the city.

Turin is gloomy with rain and fog in the winter temperatures tending to remain single digit. The summer months between May and September are milder though rain is still common.

Check on the internet for the range, location and cost of  Turin hotels

*Cioccolatò in early March is a two-week celebration of cocoa. Turin see cocoa tastings, sculpture competitions and stalls around the city centre.

*Salone Internazionale del Gusto is a five-day festival of food and wine held biannually. The event is international in flavour with traditional producers from around the world showcasing and selling their wares in a giant street market.

Steeped in history and rich with monuments famous the world over – the Vatican, the Colosseum – Rome stands as a captivating symbol of history and culture.

Leonardo da Vinci (Fiumicino) airport is 16 miles southwest of the city with the Stazione Termini direct train running hourly into the city. The main bus station is located outside the Stazione Termini. Buses run from 6:00 a.m to midnight with some all-night services. The Rome Metro service has two lines, both of which go through Termini. It runs from 5:30 a.m to 11.30 p.m. and 0:30 on Saturdays.

The climate is mild with sunny skies and pleasant temperatures. However July and August can be oppressively hot, November is often rainy, and December to February can be chill.

Check on the internet for the range, location and cost of  hotels in Rome.

*Holy Week (Easter) is time when Catholics from all over the world arrive on pilgrimages to visit the city’s churches and to hear the Pope at the Vatican. On Good Friday a procession of the Cross goes from the Colosseum to Capitoline Hill.

*The Estate Romana (Roman Summer), is at the heart of Roman social life from June to September. It’s a time when the city reverberates to free concerts, street theatre and outdoor cinema.

*In September museums, galleries and shops stay open all night from 20:00-08:00 on the occasion called Notte Bianca (white night). It’s also a time of free concerts and other happenings all over the city.