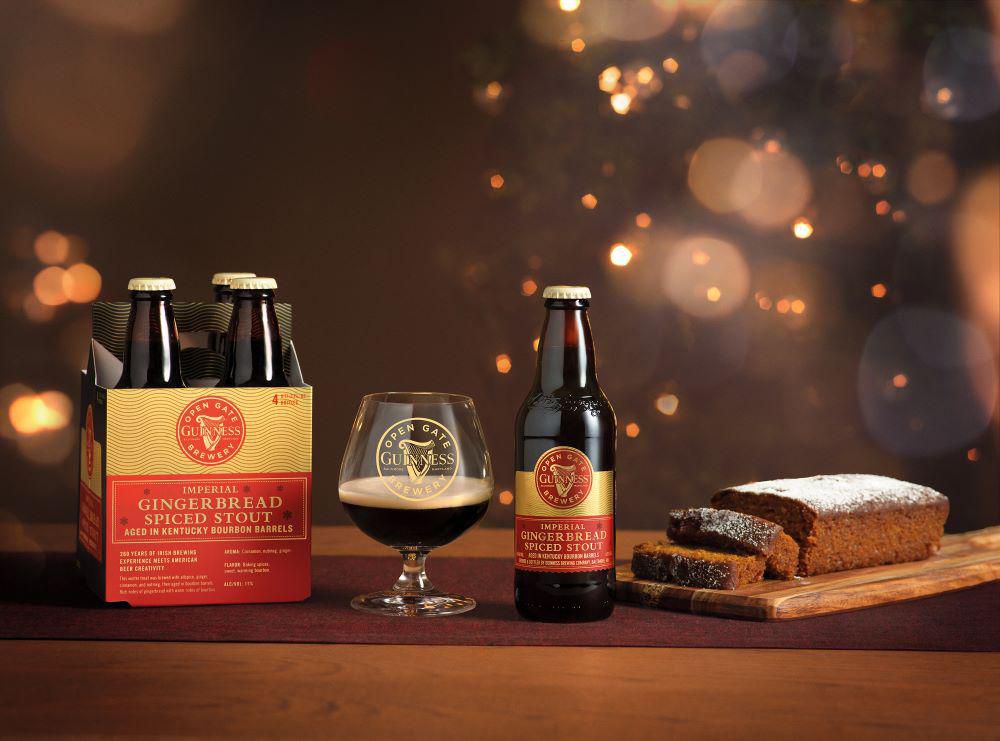 When I visited the Guinness Storehouse in Dublin three years ago, I was shocked to learn how many variants the iconic Irish brewery makes beyond its ubiquitous dry stout. So are a lot of Americans, which is why makers of one of the world’s best-known beers opened up an annex in the United States.

In an effort to both innovate and publicize more one-offs, the brewery’s US headquarters is releasing the brand’s first holiday beer this year as the third in what we can expect will become a long line of national offerings that will make shoppers think, “Really? Guinness makes that?”

“We’re known for a pretty limited range even though we have so much brewing expertise and innovation,” says Brand Director Nikhil Shah. “We want to be able to showcase that skillset.”

Guinness Imperial Gingerbread Spiced Stout goes on sale Thursday for one-time release across the country. It comes with a steep 11% ABV and $19.99 per four-pack price tag. It also, says Senior Brewer Sean Brennan, comes with a balanced dose of nutmeg and ginger on the nose and “vanilla with caramel sugary sweetness” on the palate. The added allspice and nutmeg are more subtle.

“While playing on our pilot system, we actually made this beer last year to offer our guests something a little special,” he says of his small-batch experimental brewhouse that shares space with the primary brewing system in the Open Gate Brewery in Baltimore that parent company Diageo opened in 2018. “Brewers and the team fell in love with this beer. We all wanted it.”

Guinness’ Baltimore brewers, who only brew US exclusives and not the brewery’s imported money-maker, Guinness Draught, also want to become big players in the barrel-aging game. So they brought in Brennan to put his extensive experience with barrel-aging to work.

To wit: he aged his gingerbread stout in Bulleit bourbon barrels for four months to give it a warm vanilla and caramel profile.

“We wanted a shorter time frame so the smooth and vanilla characters are prominent,” he says.

The 260-year-old brewery is also launching a holiday food campaign Thursday to showcase pairing possibilities on its social media channels. Not only does Guinness get credit for creating the original intentional food and beer pairing by first serving stout and oysters together but Guinness strongly emphasizes food at its famous St. James Gate brewery in Dublin, where it greets visitors with myriad restaurants, food-forward experiences and an executive chef who poaches the best oysters I’ve ever eaten.

Shah says the brand wants to lean into food on this side of the pond because this kind of dialogue usually attracts a lot of interest from its social media followers and because doing so is a natural way to showcase a beer’s flavor profile. It also wants to lean into doing what the cool kids, I mean craft brewers, are doing, because it’s trying to position itself as “thriving and credible in the eyes of consumers,” he says.

Guinness’ expansion styles haven’t scored particularly well on ratings sites but then, neither does its flagship, either, and I’d wager there’s nary a beer drinker in Europe or America who hasn’t at least tried one.

So Guinness brewers in Baltimore will keep on trying as they settle into their unique role – trying to form their own identity separate but complimentary to the mother ship and trying to win hearts and minds by testing out craft beer’s tools of the trade.

“We’re playing the long game here,” Shah says. “We want to establish more of the brewery’s potential, which is not something we can do overnight.”