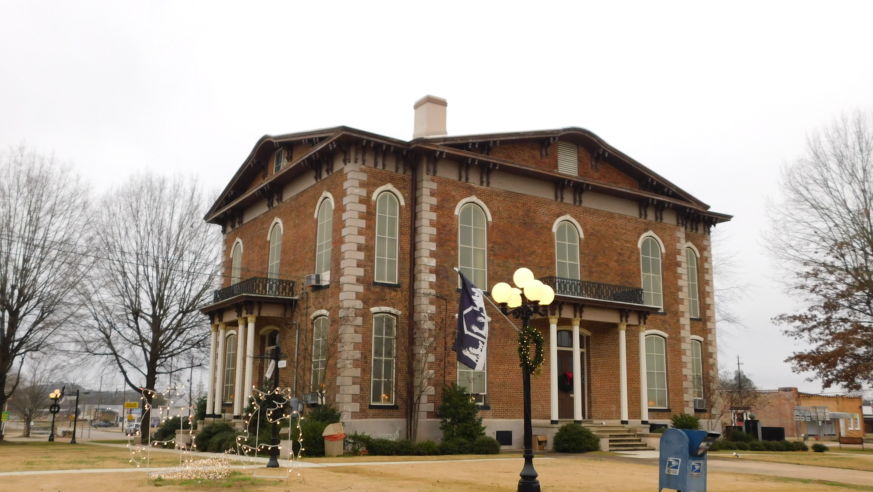 This courthouse in western Alabama is haunted by a lynched man.

In Carrollton, Alabama, west of Tuscaloosa, almost to the Mississippi line, sits the Pickens County Courthouse. This courthouse was built in 1877, after it was destroyed several different times during the unrest of the civil war and reconstruction. People who visit the courthouse today can still see a ghost of these times – the terrified face of a man, etched permanently in a window.

Legend has it that the face belongs to a Black man named Henry Wells, a freedman who had previously been enslaved nearby. In 1878, Henry was arrested for allegedly burning down the previous courthouse. He was taken to the courthouse to await trial.

After word of his arrest spread through the town, a mob of drunken white men gathered outside the courthouse. Henry, watching the mob gather outside, is rumored to have yelled “I am innocent! If you kill me, I will haunt you for the rest of your lives!”

At just that moment, a bolt of lightening struck the courthouse. The flash illuminated the scared look of terror on Wells’ face.

The mob eventually forced their way into the courthouse, where they took Henry Wells outside and lynched him.

When the light of day arose the next day, people noticed that Henry’s face and the look of fear, that had been illuminated by the lightening, was somehow etched on the window of the courthouse. The face remains there to this very day.

In the centuries since, people have tried to wash the face off the window to no avail. They even tried to replace the glass, but nothing has been able to remove the terrified face of Henry Wells from the window.