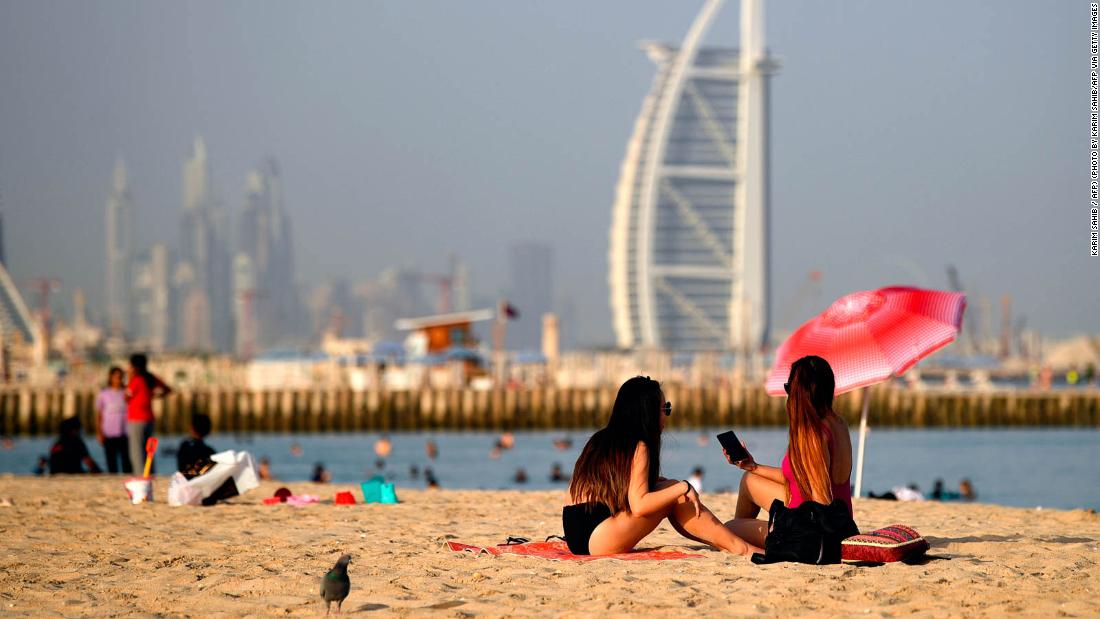 Travel
Share on Facebook
Share on Twitter
Share on Pinterest
Share on LinkedIn
(CNN) — The moment travel restrictions from the coronavirus pandemic are lifted, Peleg Cohen knows exactly where he is headed. The Israeli-born travel blogger, photographer and humanitarian, 37, says he has been on the road since his early 20s, visiting 150 countries and chronicling it all for his travel blog, Lonely Peleg.
As soon as it’s safe to travel again, he is headed somewhere that just a few months ago was entirely off limits to him and now is predicted to be one of the hottest vacation destinations for Israelis in the coming months: Dubai.

Since Israel’s creation in 1948, the nation has been recognized officially by only two of the 22 states in the Arab League: Egypt and Jordan.

Across the Persian Gulf and much of the Arab world, Israeli travelers have traditionally been banned from entry thanks to their passports not being acknowledged. Citizens of most Arab countries, in turn, have been incapable of traveling to Israel to visit the holy sites of Jerusalem and the beaches, restaurants and nightlife of Tel Aviv.

But all of that changed last month when Israel and the United Arab Emirates, which includes Dubai, announced the Abraham Accords. It’s an agreement that made the UAE the third Arab nation to officially recognize Israel and melted decades of cool relations between the two countries.
It was a treaty that fell like a strong first domino, kicking off a series of successive events. Bahrain joined in on the Abraham Accords with Israel less than one month later.

Oman is widely expected to be the next to jump in line to allow Israeli travelers in.

Saudi Arabia opened its airspace to Israeli jetliners in August, a historic decision after decades of requiring Israeli planes to track a wide hook around the Persian Gulf to avoid crossing into its air territory, and they are rumored to be next in terms of full diplomatic relations.

There are whispers that Morocco, which already allows travel to and from Israel, is also now mulling the move.

All of these political shifts have injected massive optimism into the tourism industries of Israel and the Gulf Nations, which have been battered by the coronavirus and are more than eager for a jump start.

Direct flights between Tel Aviv and Dubai are said to be imminent, but no firm date has been announced. But even before the the first jet takes off, industry analysts are already predicting that 1.25 million new tourists, suddenly welcome to transit across each others’ borders, will travel between Israel and the Persian Gulf in the next few years.

Israel is a tiny country of fewer than 9 million citizens. But Cohen says the excitement among them to explore the Persian Gulf is pretty universal.

Israel is a tiny country of fewer than 9 million citizens. But Cohen says the excitement among them to explore the Persian Gulf is pretty universal.

“There are a lot of types of Israelis, but I think all types of Israelis will want to fly there,” Cohen said in a phone call from his hometown in the northern Israeli city of Nahariya, where he has been riding out the pandemic. “Dubai, and the Emirates, has so much to offer the Israeli market,” he said, adding that even the nation’s religious Jews, who observe Shabbat and the dietary laws of kashrut, will want to take the trip.

When Cohen arrives in Dubai, he’ll have someone to help show him around: His new friend Khalifa Al Mazrouei, a fellow travel blogger and renowned daredevil from Dubai, with whom he struck up an online friendship after the two participated in a live Facebook chat about travel between the UAE and Israel for the Israeli Ministry of Tourism.

Khalifa Al Mazrouei, a fellow travel blogger and renowned daredevil from Dubai, and Cohen participated in a live Facebook chat about travel between the UAE and Israel for the Israeli Ministry of Tourism.

The two have been chatting frequently since their Facebook appearance together on September 15.

Al Mazrouei, who chronicles his adventures scaling mountains and exploring caves across the UAE at @UAE_Outdoors, said he was surprised when he heard about the Abraham Accords, and even though he has always had a longing to travel to Israel and pray at Al-Aqsa Mosque in Jerusalem, he also felt a surprising emotion: fear.

“Arab people never thought we would have relations between Israel and the UAE,” he said in a phone call. “What we always have heard is that they [Israelis] were bad, and they were dangerous. We’ve heard this since we were kids.”

Now that he knows he can travel to Israel, however, he’s taken it upon himself to help dispel that stereotype in Emirati society. And as he’s educated himself about the diverse terrain of Israel, chatting with Israeli bloggers and influencers about the nation’s deserts, sea and mountains, he’s started sharing his excitement about visiting Israel with his own Emirati followers.

“I didn’t think [Israelis] would welcome me in their country, and in fact they are really excited — more excited than we are,” he said. “So I feel like it’s my responsibility to show people here about their traditions and their places, so Emiratis understand it.”

Now that Al Mazrouei knows he can travel to Israel, he’s taken it upon himself to help dispel negative stereotypes of Israelis which persist in parts of Emirati society.

Al Mazrouei is far from the only one making plans for Israelis’ arrival in Dubai.

El Al Airlines, which flew a pilot flight of journalists and diplomats from Tel Aviv to Dubai on August 31 to much fanfare, is expected to announce regular nonstop service soon, according to numerous news reports across Israeli media.

Two United Arab Emirates carriers — Etihad Airways and Emirates according to Israeli media — are tipped to launch nonstop flights between the UAE and Tel Aviv by January. Israir, Israel’s budget competitor airline to El Al, will also enter the fray with $299 flights between the two countries.
Abu Dhabi and Israel have even brokered an agreement on a joint television production deal and film festival, which will alternate years between Israel and the UAE and drive visits between the nations.

“The peace agreement creates enormous potential for tourism between Israel and the United Arab Emirates, both in terms of bilateral tourism and opening both countries to new target markets,” said Amir Halevi, director general of Israel’s Ministry of Tourism.

“Contacts between representatives of the two countries are currently taking place in a variety of aspects related to tourism. This includes aviation and tourist visa agreements from both countries, as well as creating marketing agreements for joint Middle East tour packages. These packages will combine a visit to Abu Dhabi, Dubai, Jerusalem and Tel Aviv with other Middle East countries, on flights that will overfly Saudi Arabia.”

Even the option to simply transit through Dubai marks a new world of travel opportunities for Israelis, who have historically been required to transit through either Turkey or Jordan if they wished to travel anywhere in the Arab world via Tel Aviv.

The Israeli-born travel blogger and photographer Peleg Cohen has visited 150 countries plans to make Dubai his next.

The cascade of treaties with Gulf nations represents not only peace but also a fallout from ongoing tensions with Turkey, where President Recep Tayyip Erdogan, a strident critic of Israel despite maintaining diplomatic relations with the country, has threatened to suspend ties with UAE over the deal.
“The Emiratis see Israel as really the only country in the region to aspire to in terms of technological proficiency and military effectiveness,” said Michael Stephens, a foreign policy analyst and national security expert, in a recent interview for the Foreign Policy Research Institute.

“As such, their relations with Israel have been growing for years, and this is really just an admission of what we already know to be true: that the two countries are friendly and see eye-to-eye on many issues, and not just the position of Iran and its influence in the region.”

After participating in the video chat with Cohen, Al Mazrouei was surprised to learn that many Jews share traditions and language with Arabs, including Cohen himself, whose family comes from Tunisia.

Many Israelis who watched the video chat have reached out to him and invited him to explore both the Israeli desert and the mountains, which he hopes to do soon.

“I’ll be the first one to fly to Israel — unless Peleg is on his way to Dubai, and then I’ll wait for him here, because I will meet him and show him around,” he said with a laugh.