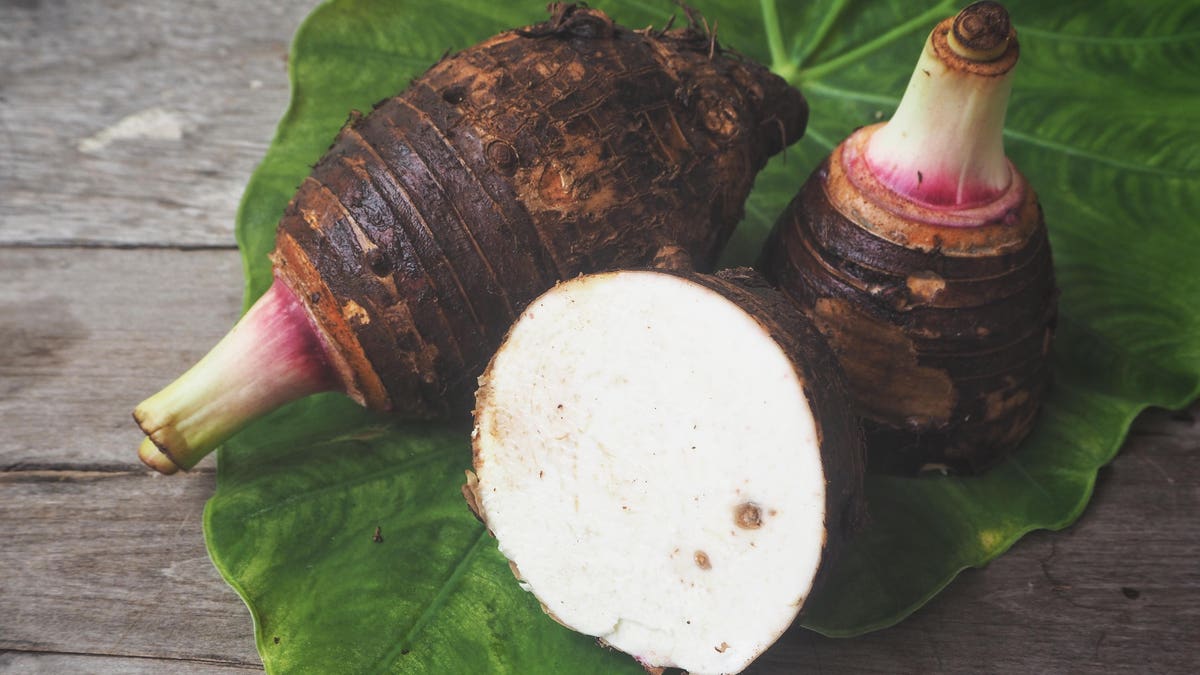 Dasheen is among a family of root crops or “ground provisions” grown on the islands of the English-speaking Caribbean, dating back to the early 16th century. Also known as taro, blue food and kalo, historians say that the crop arrived to the Caribbean aboard Trans-Atlantic slave ships, along with African food culture and agro-ecological knowledge.

Stories are told of African slaves foraging for the large, elephant ear leaves of the dasheen plant to make a stew called callaloo or in cassava fufu, a popular West African staple. Steeped in the trials of a colonial past, dasheen is one of a handful of crops that made their way into diets as a product of resourcefulness and making do with little.

Given its historical roots, the starchy tuber has not traditionally been associated with fine dining. Nor has it typically received any degree of noteworthy acclaim, despite its influence on local culture, and substantive nutritional, environmental and economic value.

But with the advent of more conscious eating patterns, the trendiness of farm to fork dining and an upsurge in demand for authentic culinary experiences and indigenous foods, the tuber has been experiencing a global resurgence.

Callaloo, the national dish of Trinidad & Tobago and Dominica, has become the most common recipe associated with dasheen leaves, and is enjoyed throughout the region and around the world. Introduced to a global audience in the 1980’s, as one of Dr Heathcliff Huxtable’s favourite foods in The Cosby Show, callaloo is thought to be an adaptation of a West African stew called palaver or palaya sauce and is traditionally served with a protein such as crab, salt fish or oxtail.

Whether at The Gazebo at Jamaica’s Goldeneye Resort in Ocho Rios, where dasheen grows on the property’s 2,500 acre farm, or at Miss Lily’s in the Sheraton Grand Hotel in Dubai, where it is stuffed in Escovitch style steamed Sea Bream— no Caribbean restaurant in the Diaspora or at home is complete without dasheen on the menu.

The reason for this is evident in the root’s unique and multifaceted value to the region.

From sauces, ice creams and liqueurs to pizzas, salads and soups, it is easy to make a variety of food items with the versatile tuber. The corm resembles a potato, which means that it can be fried, steamed, boiled, roasted or mashed and the leaves are reminiscent of spinach and can be boiled or steamed. The root can even be pulverised and converted into flour.

Dasheen has a higher nutritional value than most other roots and tubers and is said to have analgesic, anti-cancer and anti-inflammatory properties. The root is high in fibre, and is rich in vitamins and minerals such as Vitamin B6, C, E, potassium and manganese. The leaves are high in Vitamin A and C and both corms and leaves contain high-quality protein and are excellent sources of phosphorus, potassium, calcium, and iron.

At The Aquarium restaurant in Grenada, Chef Lavon makes his famous Callaloo Cannelloni by “boiling down” the leaves of the dasheen and creating a juicy callaloo, cream, cheese and steamed coconut filling seasoned with onions, pepper, garlic and ginger which he stuffs inside cannelloni pasta tubes.

Luigi and Christina Moxam, of Cayman Cabana restaurant in the Cayman Islands are advocates of “locavore” or farm to fork culture, and fresh dasheen is one of their favourite ingredients.

“Callaloo garden rice, callaloo soup, callaloo and feta spanokopita, callaloo tortellini… You name it, it’s either been on our menu or still is,” says Christina Moxam. “We are passionate about sharing the sustainable and eco-conscious benefits of eating fresh local ingredients and with its spinach-like flavour, local availability and high nutritional content, callaloo is one of our favourite foods.”

From the perspective of farmers, dasheen is economically ideal. The crop requires few inputs but offers high rewards. As a high yielding crop, typical harvests of 12 to 14 tonnes per hectare can be expected when rainfall levels are high.

In an interview with the Jamaica Gleaner, a dasheen farmer recently revealed that an investment in 1,000 dasheen suckers would yield 3,000 pounds of dasheen (each sucker will give three pounds) at a market price of over $2,050 USD— a significant sum of money by any standards in Jamaica.

“I am expecting a good profit, push me far ahead,” the farmer said.

Globally, demand for the crop has increased by almost 12 per cent over the past few years, creating extra-regional opportunities for trade. (Taro Market – Growth, Trends, and Forecast (2020-2025)”) In countries such as Dominica, where 1,288 hectares are reserved for dasheen cultivation, with yields of more than 96,000 hg/ha, the crop is a critical export commodity. (FAOSTAT, 2018) In St. Vincent and the Grenadines, dasheen farming is omnipresent across the rural terrain, making it an important strategic commodity.

Dasheen is also a contributor to culinary tourism. Those on the global food festival circuit are likely to be familiar with the Blue Food Festival in Tobago, where patrons revel in a celebration of all-things dasheen. The popular Tobagonian event has taken place annually for more than two decades and was rated by CNN as one of the world’s best food festivals.

Dasheen’s ability to withstand extreme weather and support soil health and circular food culture makes it a beneficial crop for the environment; in its cultivation and production the crop has a little to no impact on water, land, forest, air or soil.

Dasheen is a herbaceous perennial that typically takes 7 to 12 months to fully mature. This means that the soil in which the crop grows can remain undisturbed for months before harvesting, which is good for maintaining high levels of soil carbon, promoting soil health and climate change mitigation.

Given that the entire plant, from leaves to roots, can be utilised in cooking, there is minimal post-harvest waste, which means that the plant carries a low carbon footprint and has great value from the perspective of food security.

Dasheen is also a climate resilient plant, with an ability to flourish during heavy floods. There are also varieties of the dasheen plant that are resistant to drought and high salinity soil.

In 2016, concerns surrounding the lack of genetic variety of dasheen in countries such as St. Vincent, Jamaica and Dominica resulted in the introduction of 50 new genotypes of the crop under a project funded by the EU. Continued support of this nature would be critical, in order to boost the biodiversity of the crop in the Caribbean, and enhance its climate resilience.

Almost 5,000 miles away from the Caribbean, in Hawaii, dasheen or kalo as it is called, is regarded with utmost reverence. Referred to as “the staff of life”, it is used for medicinal purposes with the belief that it has the greatest life force of all foods. Dasheen is revered for its nutritional, environmental, economic and even spiritual properties.

Given its myriad benefits, the Caribbean has also begun to take notice.

In Jamaica, under the leadership of the Ministry of Industry, Commerce, Agriculture and Fisheries’ (MICAF) Production Incentive Programme, dasheen has been targeted as a strategic crop for development, with an objective of expanding local hectares under cultivation from 21 to 30.

Under this programme, the island’s 230 dasheen farmers experienced a four per cent increase in production during the 2019-2020 year, and the ministry anticipates a yield of approximately 378 tonnes in 2020-2021.

In October, Jamaica’s Minister of Agriculture, the Honourable Floyd Green as part of his World Food Day presentation, hosted Chefs Peter Ivey and Patrice Harris-Henry from hunger charity, Mission:FoodPossible, in a cooking demonstration of dishes made with the dasheen plant. The event was followed by a social media campaign created by the charity to elevate the “brand” of what it referred to as an “MVP” or “Most Valuable Produce”.

In a region struggling with a food import bill worth billions of dollars, rapidly increasing non-communicable diseases and limited local food production, it would be advantageous for the countries of the Caribbean to adopt a similar sense of reverence for the dasheen plant as the people of Hawaii.

The gradual mainstreaming of dasheen has been a step in the right direction but governments must place more emphasis on this “blue food” and treat it as the Caribbean’s other blue economy. To make dasheen production and consumption a strategic priority— to raise the brand profile of this loved but tragically underutilised crop— would have significant implications for health, food security, the economy and the environment of the Caribbean region.