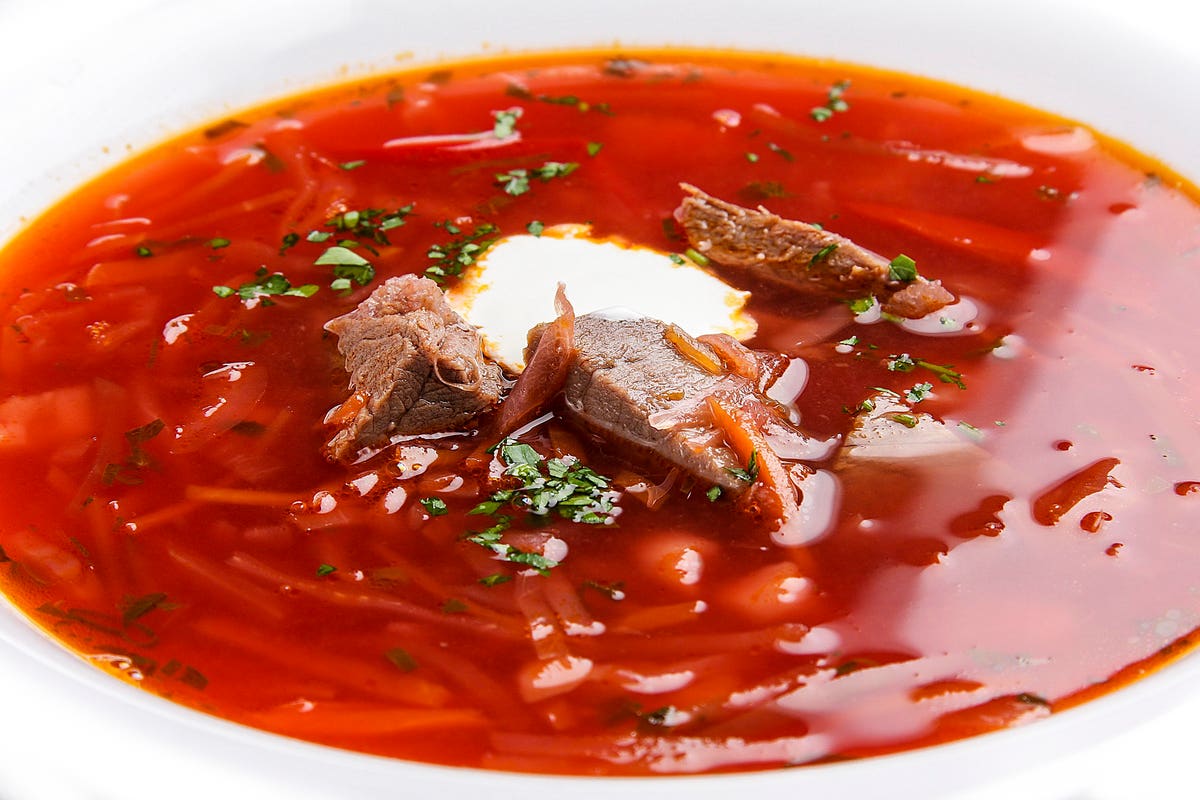 The two neighbours have a long shared history, but in recent years their relationship has been scarred by armed conflict, and annexation of territory. Now there’s another looming confrontation over cultural heritage—and national cuisine.

It’s all about borshch, a hearty soup made from beetroot and other vegetables, usually containing meat, and served with a dollop of sour cream. It is the perfect warming start to a meal on a cold day in Russia, Ukraine, or any other of those regions of the former Soviet Union prone to harsh winters.

In the sense that it is popular across both Russia and Ukraine, it is something that the two countries share.

Recipes Handed Down The Generations

A word or two about what a sensitive issue this is. Both in Russia and Ukraine, borshch recipes are handed down through the generations, a tradition proudly maintained. Different versions of the dish will insist on different ingredients (the non-expert list I have offered above is from a recipe we use in my house, and that we have from a Russian lady we knew when I was a correspondent in Moscow).

There are different spellings, too. “Borshch” is a direct transliteration of the Russian name for the soup, but you will also see “borshcht.”

To outsiders, this might seem like a storm in a soup bowl, but countries and cultures the world over jealously protect their culinary heritage—and, in the case of Russia and Ukraine, the background of war makes this a serious matter.

In 2014, Russia annexed Crimea from Ukraine, leading to widespread international condemnation, and extensive western sanctions. Russia continues to back separatist forces in the east of Ukraine, where the conflict is estimated to have cost more than 13,000 lives.

As a preliminary stage to a formal application to UNESCO, Ukraine has declared borshcht (the spelling used by the Institute of Culture of Ukraine) part of its own intangible cultural heritage.

The Institute reports having carried out extensive research into the way that the dish is prepared in different regions of the country. Maryna Sobotiuk, the Institute’s Deputy Chairman, was quoted in a news release as saying, “that the most impressive thing during the expedition was the borscht from the blood of a freshly slaughtered boar.”

So far, Russia is not especially impressed. An article published October 6 on the website of Rossiskaya Gazeta (the official newspaper of the Russian government) began by informing its readers that, “Ukraine had organized new grounds for scandal” with the planned move for UNESCO recognition.

In an email response to my questions, Sobotiuk stressed the “deeply historical” nature of the way “that borscht is passed on in Ukraine from generation to generation”—and the soup’s long tradition in the country.

“Writing about food in the Middle Ages and modern times was not accepted, so the first recipe for borscht takes place in Ukraine in the ‘Description of the Kharkiv governorship’ and dates back to 1785. Therefore, our study is very historically sound.”

Uniting A Ukraine At War

It has taken on a special significance in the present.

”This dish is prepared in every Ukrainian home,” Sobotiuk says. “And in a country at war, it is now important to emphasize our own identity and unite people, thanks to the intangible cultural heritage, in particular, in this case, the culture of Ukrainian borscht.”

The United Nations is used to deciding on contentious international questions, but the borshch question may prove to be a recipe for yet more diplomatic discord between Russia and Ukraine.