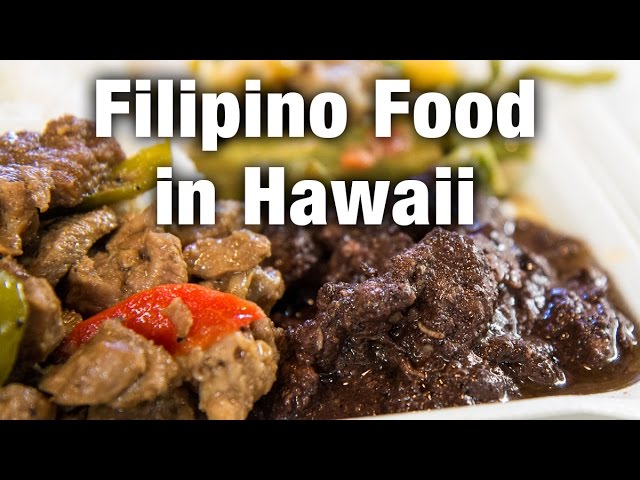 Back in 2010, I spent about 2 month in the Philippines, exploring, doing all sorts of things, and eating all sorts of food. The amazing people I met, and the delicious food I ate, contributed to it being a very memorable trip. This time, I didn’t make it back to the Philippines yet (however, I hope to visit soon in the future), but when I was in Honolulu, Hawaii, I came pretty close to the real thing at a restaurant called Naty’s Kitchen at the Maunakea Marketplace in Honolulu.

The Maunakea Marketplace is located right in the heart of Chinatown in Honolulu, and if you walk inside the marketplace, and go to the food court section, it honestly feels like you’ve left Hawaii altogether, and have transported yourself into a market in Manila or somewhere in southeast Asia – it’s my kind of spot. There are a few different types of food to eat at Maunakea Marketplace, including a couple Thai stalls, but by far the dominating cuisine in Filipino food, and there are about 5 different Filipino food stalls to choose from. One of the most well known, and also they offer the most selection of dishes is Naty’s Kitchen. Naty’s Kitchen dishes out all the prepared food and has them all on display in the from cabinet, and you just pick and choose the different dishes that you want, which will then all be piled into a styrofoam container. Typically most customers might get a box with 2 dishes and rice, but I couldn’t resist ordering 3 dishes and then a bowl of sinigang soup on the side.

After getting my rice, I ordered the pork dinuguan, one of the more noticeable Filipino foods of pork and blood made into a stew. Although it might not look the most appealing, and some people even call it chocolate pork, it actually tastes quite amazing. It’s almost like blood sausage without the casing, except it’s much more moist and has a gravy. The taste was very nice, almost with a slight hint of a livery flavor and just a slightly sour flavor as well. At first I was also going to order the pork adobo, which is one of the most well known Filipino foods, but it was made with pork belly and after seeing how oily it was, I asked the Aunty if she had any other recommendations. She pointed to the pork igado, which she said had a similar flavor to adobo, but it was made with a less fatty cut of pork. The igado was excellent, including tender chunks of pork, in a pepper and vinegar sour sauce. Along with my rice, it was very good.

The last dish I got on my plate has always been one of my favorite Filipino foods, a dish called pinakbet, which is a mixture of different vegetables fried up with shrimp paste. It wasn’t overly shrimpy or overly salty, just had an excellent fragrance, and a good mixture of vegetables that went well with all the pork dishes. Also, I couldn’t resist getting an order of pork sinigang. When I was in the Philippines I really enjoyed eating fish sinigang, a sour tamarind soup, but here at Naty’s Kitchen in Honolulu this day, they only had the pork version. The flavor of the soup was very good, but the pork made it a little on the oily side – it was good but I would have preferred the fish version.

Naty’s Kitchen is an excellent and quite authentic restaurant in Hawaii that serves delicious Filipino food.

Naty’s Kitchen – Maunakea Market Place, Chinatown
Open hours: I went there at about 11 am on a weekday and they were open and thriving, but I’m not sure of their exact business hours
Prices: All the food I ate and ordered above cost $11
How to get there: Naty’s Kitchen is located in Chinatown at Maunakea Market Place right in Honolulu, Hawaii. If you can find street parking that’s great, otherwise there is a municipal parking garage nearby.

Music in this video is from Audio Network

I’d love to keep in touch with you:

Thank you for watching!