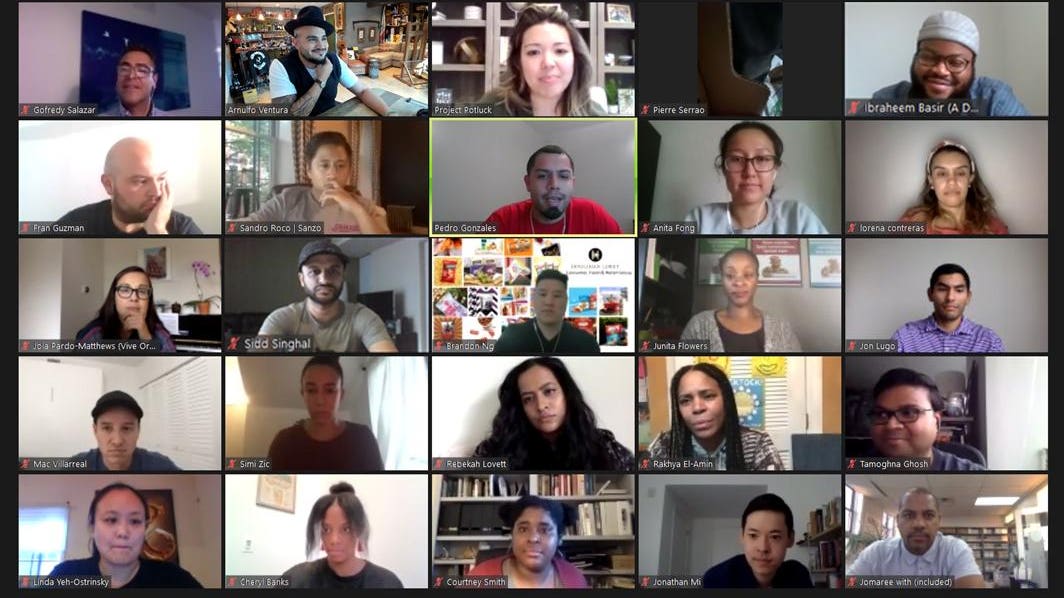 Mentoring is an essential ingredient for career advancement. Study after study supports the notion that both mentees and mentors get promoted faster and more often, earn a higher salary, and are more likely to stay at their company as a result of mentorship. According to the Harvard Business Review, even CEOs need mentors, and in one study, 71% of CEOs report delivering better business results due to mentoring.

However, only 37% of employees report having a mentor. This disparity becomes more pronounced for the BIPOC (Black, Indigenous, and People of Color) workforce. Coupled with low representation in higher management, lack of mentorship is a common obstacle to their workplace advancement.

This lived experience led Abuelhiga to join forces with fellow entrepreneurs Ibraheem Basir, Founder and CEO of A Dozen Cousins, and Arnulfo Ventura, CEO of Beanfields, to launch Project Potluck, an initiative dedicated to helping People of Color build their careers in CPG.

The industry was quick to respond. In just a week, over 100 mentors and 300 mentees have signed up to join the program. Tapan Shah, Principal of the PepsiCo Ventures Group and Greenhouse Accelerator, was one of the first to raise his hand as a mentor. “The industry mentality of ‘doing good’ has masked the fact that we don’t have a diverse base of founders and entrepreneurs in our network,” Shah reflected. “It came to light for me over the summer, whole trying to build panels and find People of Color to talk about what was going on in the country. It was very acute to me what was going on in the industry, from founders to high-growth brands. As an Indian man, I couldn’t pass up this opportunity to support Project Potluck.”

Mentoring has been paramount in Shah’s career. He said, “I have had a number of amazing mentors, like Michael Repole [founder of Vitamin Water] and Rohan Oza [Glaceau/CAVU Ventures]. As I moved to investing, Accel Foods founder and pioneering female investor Jordan Gaspar has been a friend, mentor, and has been fundamental to my growth. I wouldn’t be at PepsiCo had I not had her mentorship.”

Zoe Feldman, who is the Director of the Chobani Incubator, said, “I personally support these efforts because I know how it feels to be looked at and spoken to like you don’t belong. To help address inequities, Incubator programs need to make diverse portfolio companies a priority, just as Chobani has done. In my view, as a former VC, VC’s remain a huge part of the problem. They need to commit capital to invest in underrepresented groups – 50% in future investment to support founders of color would be a good start. VC’s are the most implicit in the inequality in which a very small percentage of the population controls the vast majority of the wealth – and they can solve this by actually using their power in a meaningful way.”

In addition to supporting start-up CEOs, the founders of Project Potluck are confident that they will make significant headway in changing perspectives regarding hiring diverse talent into CPG, as well. What some executives talk about a pipeline issue, Basir points out that it is a perspective issue. He says, “The challenge for us as leaders is to be creative about finding the talent that we want. If I have a role and I want to fill it, am I going to HBCUs, am I putting jobs on Craigslist, am I looking at data on where diverse applicants network? Hire diverse leaders, and they will bring diverse networks and attack more diverse talent. A homogenous leadership team saying that they cannot find diverse talent – well, that’s an indictment on themselves, more than the communities they are talking to.”

Peer mentorship is helping the Project Potluck founders, as well. All three – Abulhiga, Basir, and Ventura – are CEOs and running their own companies. Ventura elaborates, “I have been super inspired and motivated to come together with Ibraheem and Ayeshah. It puts my heart and my head in a better place. This job is hard enough, and it feels lonely enough. To know that I can talk to at least two other people that have some similar, shared experience as me uplifts me. I always end our calls feeling that the best part of my week was seeing their faces. You can’t underestimate this part of it.”

Basir is enthusiastic that they network will continue to grow rapidly, and he has a goal to sign up 500 Project Potluck mentors by the end of 2020. He often gets asked, “How can I help?” and his answer is, “Have knowledge and experience in the CPG industry? Volunteer to offer mentorship at PotluckCPG.org – we welcome people of all backgrounds. If you are a person of color working in this space, become a member, join our listserv, and join our events.”