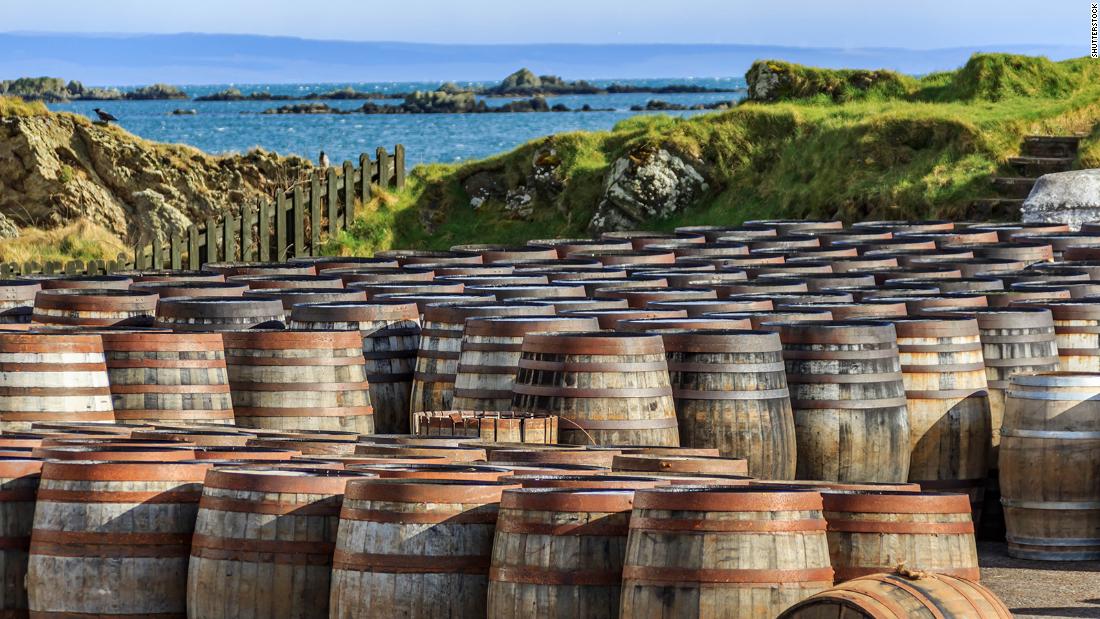 (CNN) — Off the southwest coast of Scotland lies a collection of small islands that make some of the most distinctive whiskies in the world.

Names like Ardbeg, Lagavulin and Laphroaig are revered by whisky lovers from Japan to New York, from Australia to St Petersburg. Yet those three ancient distilleries are not only on the same island — Islay — they are lined up together on a narrow two-mile stretch of coastal road on Islay’s southern shore.

Nearby, across a 500-meter stretch of water, the island of Jura also produces whisky, a less smoky, more herbal dram from an almost deserted landscape.

And nearer to the mainland stands mountainous Arran. This island is also unique in being the only whisky-producing outcrop that makes Highland whisky on its north coast and Lowland on its south.

These rugged islands, drenched in mist and buffeted by the roar of the Atlantic, are hugely important to the Scottish whisky industry. And whisky itself is vital for the Scottish economy.

The Carraig Fhada Lighthouse on Islay — one of Scotland’s most important whisky islands.

Just as the champagne industry cannot be allowed to fail in France’s Champagne region, so Scotland protected its whisky industry as best it could during the Covid lockdown.

So what was the impact of Covid on these islands and on the whisky they produce?

These three important whisky islands — Arran, Islay, and Jura — were completely sealed off during the British lockdown. The only ferries that arrived were delivering supplies (99% of what sustains the islanders arrives by boat).

The only people allowed off-island were those with medical emergencies.

As a result there were no cases of Covid-19 on the whisky islands, even though Glasgow and Cumbria on the mainland nearby were badly hit.

That is not to say the islands didn’t suffer, however. As non-essential industries, all distilleries in Scotland were obliged to close by March 29, 2020.

The Laphroaig whisky distillery on Islay.

This inevitably affected the local economy. Ten thousand people work in the Scottish whisky industry, the majority of them — 7,000 — in remote areas like the Highlands and the islands.

“All distillery staff were furloughed during lockdown,” says John Campbell, manager at Islay’s Laphroaig Distillery. “It was very quiet on the island and good to be able to go out for a walk and not meet anyone.”

Laphroaig, founded in 1815, normally produces over two and half million liters of smoke-infused, peated whisky every year and has the distinction of being “by appointment” to Prince Charles.

Those quiet roads also meant no tourists. With the closure of distilleries came the closure of all visitor centers and hotels. Islay annual whisky festival (Fèis Ìle), which normally swells the island’s population from 3,000 to 10,000 in May, had to be canceled.

“The weather this spring was beautiful and I was able to spend a lot of time on the beach with my son,” says Jane Deakin, manager of Islay House Hotel, located in the grandest mansion on the island. “But we had to close our doors for four months.

“Whisky tourism is incredibly important to us. In 2019 the Whisky Association recorded over two million visitors coming to Scottish distilleries, and a tenth of that number — 200,000 — come to stay on Islay. I estimate it will take two to three years for us to make back what was lost during lockdown.”

Linda Maclellan, who runs one of Islay’s best fish restaurants, the Bowmore Hotel, describes the current situation as “pretty dire. All the distilleries are making whisky again, but on Islay only Ardnahoe is offering tours to visitors.”

Whisky island Jura was completely sealed off during a coronavirus lockdown.

The visitor experience on mountainous Arran isn’t much better either. Fortunately Arran’s whisky lockdown didn’t last as long as Islay’s because the island’s two modern distilleries, Lochranza and Lagg, were built to be operated by one person. As such they had special dispensation from the Scottish government to recommence early on 12 May.

At Lagg, which produces Lowland whisky on the island’s southern coast, manager Graham Omand soon had his computerized distillery up and running again. “I was in my office and there would be one member of staff socially distanced in the distillery and so we were able to start mashing (mixing milled grain with hot water to extract the sugars) again straight away on May 12. That went on for a week and by Monday the 18th we were able to start distillation again.”

Not all island distilleries were that fortunate.

The Isle of Arran’s whisky lockdown didn’t last as long as Arran’s.

Back on Islay, Laphroaig is a much older and more complex distillery, meaning that manager John Campbell needed to bring in three staff members to restart production. “This meant we didn’t reopen until 29 May, the day after the whole of Scotland came out of lockdown,” he says.

These older distilleries didn’t always take well to having been shut down for so long. Many have been customized, adjusted and added to over the years and are only kept in a delicate balance by being constantly in production. “It took six weeks to get things back to normal,” says John Campbell. “We had never been shut for this length of time for over 40 years. I reckon we lost about a million liters of whisky and we will never make that up. Even working 24/7. It’s just lost.”

Visitors to Islay always make straight for Port Ellen where Ardbeg, Lagavulin and Laphroaig stand together on the coastal road, but Ardbeg and Lagavulin have only reopened for tastings — with no distillery tours — while Laphroaig hasn’t reopened at all for visitors. Neither have Caol Ila, Bruichladdich and Bowmore.

The Ardbeg distillery has reopened for tastings.

Similarly on the island of Jura, which sits less than half a kilometer east of Islay and is home to a single distillery (also known as Jura), there are no plans to open to visitors.

So it’s not looking like whisky tourism will be bouncing back any time soon in the islands. Back over on Arran, Lagg reopened its shop to the public on 21 July and its café two weeks later on a “pre-booking only” system.

“Distillery tours were to begin again on 14 September,” says Graham Omand, “but new government guidelines prohibiting mixing more than two households and having more than six in a group has made that unfeasible, even though we were only going to run two tours a day with clean-downs in between.”

Instead Lagg is offering tutored tastings in a room that Graham says is “big enough for two groups to keep their distance while enjoying the whisky we have to offer.”

Whisky exports bring in $6.3 billion to a year to Scotland.

Visitor center admissions provide only a small addition to a distillery’s primary profits, but footfall can still be significant.

On the north coast of Arran in 2019, 120,000 people visited the Lochranza Visitor Centre where there was an attractive modern café (currently closed).

The charge in the shop for tasting four whiskies was £15 ($19), with a distillery tour costing an additional £10 and many visitors buying a bottle of single malt to take away with them. Until the Scottish government lifts its restrictions, the number of visitors will continue to be low and an additional source of income will be denied.

“We’re fortunate that we will get back up to our 500,000-liters annual target by end of the year, with no extra costs,” says manager David Livingstone.

Lagavulin is one of Islay’s well known whisky producers.

“It’s a terrible thing that we’re not able to offer full distillery tours. But the safety of our customers and workers takes top priority. Once lockdown is fully lifted, we look forward to bringing visitors through in order to experience the magic of distillation first-hand, once again.”

Another post-lockdown problem is an actual shortage of whisky on some of these islands this autumn. Although all aspects of production are required by law to take place on the home island, the filled whisky barrels are always sent to bottling plants on the mainland.

The disruption to supply chains caused by lockdown means that at the moment it’s not possible to buy a bottle of Laphroaig on Islay.

It’s not in the supermarkets and it cannot be purchased from the Laphroaig Visitor Centre because that remains closed.

So islanders are finding themselves in the bizarre situation of having millions of liters of Laphroaig whisky sitting in casks in island warehouses and yet less than two miles away in Port Ellen, Isaias Fuentes Cuartero, bar manager at the Islay Hotel, complains that he has been unable to source any Laphroaig on the island. “I’m actually thinking of buying bottles off Amazon.”