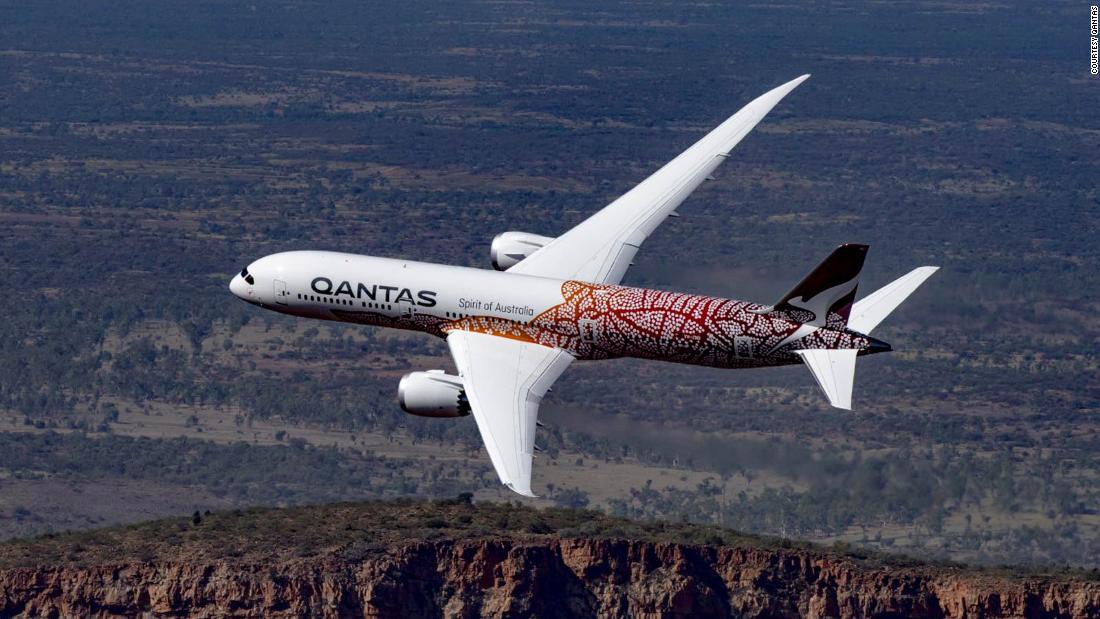 (CNN) — After months of working almost nonstop during the coronavirus pandemic, doctor Fiona Downes says stepping on board Qantas’ seven-hour round-trip to nowhere was “like being home again.”

A Qantas frequent flier, Downes spent unused points to treat herself to a Business Class ticket on board the Australian airline’s scenic Great Southern Land flight.

“It was like a once in a lifetime opportunity,” she tells CNN Travel.

Qantas flight QF787 departed from Sydney on Saturday October 10, flying over the Australian metropolis before taking in sites from Byron Bay and the Gold Coast to the Great Barrier Reef and Uluru. It then completed the journey by arriving at exactly the same place it took off from.

The flight was organized by the Australian carrier to generate revenue and accommodate travel-starved fliers, after much of its fleet was grounded amid cancellations of international flights due to the pandemic.

There were just 150 places on the plane on offer — spanning business class, premium economy and economy and costing from AUD$787 to $3,787 (US$566 to $2,734). They were only available to Australian residents, as Australia’s borders have been closed since March.

The flight has caused controversy though, with critics pointing out that, without even the excuse of getting from A to B, there was little justification for the environmental harm.

Traveling on board a Qantas Boeing 787 Dreamliner, passengers took in the Aussie landmarks from a spectacular vantage point as the aircraft intermittently descended to a roughly 4,000 feet.

It was the promise of these unbeatable vistas that prompted finance professional and travel and aviation enthusiast Ke Huang to purchase an economy ticket for Flight QF787.

“To fly at a low height over these locations was truly unique,” Huang tells CNN.

Passenger Ke Huang took this photo of Sydney from the Qantas flight.

Passengers boarding the flight were offered goodie bags to commemorate the occasion. Cushions on seats were embroidered with the name of the flight. Travelers enjoyed airplane editions of classic Aussie meals.

There was no traditional inflight entertainment on the seatback screen. Instead, the landscape outside was the focus, along with the occasional in-aisle performer.

As soon as the flight took off, with Sydney illuminated in the late morning sunshine, passengers began snapping photographs out the window of the city below. It was just a taster of what was to come.

The 787 is also known for its large windows, making it ideal for aerial sightseeing.

Flying at low altitude allowed travelers to enjoy the view.

“I’ve been to the Great Barrier reef several times, I’ve been to Uluru several times — but to actually fly on an aircraft of that size, something that’s really big and really comfortable, and you’re sitting in business class, and you’re looking out your window and that landmark is right beside you — I don’t think that experience could be repeated,” says Downes.

In the economy cabin, middle seats were left open to allow for social distancing. Other health and safety measures were also in place to protect passengers from Covid-19.

The flight flew over the Great Barrier Reef.

Ke Huang says Qantas did a good job of making sure everyone had the opportunity to admire the views, no matter where they were sat.

The atmosphere on board was “positive, joyful and exciting,” he adds.

“When we were flying over the highlights, people were certainly glued to the windows, and marveling in awe,” Huang says.

Fiona Downes says the fun started in the airport lounge, where there was a “real kind of party atmosphere” which extended onto the flight.

“Everyone who was on there, you could tell that they really wanted to be there,” says Downes. She says the crew were equally enthusiastic, as well as efficient and organized.

And it didn’t feel strange, say the passengers, to find themselves back where they’d begun seven hours later.

Passengers on board the flight taking a look at the views out the window.

Amid the controversy of operating a flight to nowhere at a time of climate crisis, Qantas said it would offset 100% of the flight’s carbon emissions.

The move wasn’t enough to quell some critics.

“This flight may go nowhere but planet-wrecking emissions have to go somewhere. That somewhere is straight into the atmosphere where they contribute to climate breakdown,” a spokesperson for Friends of the Earth told CNN Travel.

“With the climate crisis as severe as it is we need to keep flight numbers below what they were before the coronavirus pandemic, not add more on what is essentially the definition of a pointless trip.”

Passenger Huang says he understands why some may see flying to nowhere as “excessive” but he was reassured that the ticket price included contributing to Qantas’ carbon offset program.

Downes says she debated whether or not she should buy a ticket, before opting to do it because there were also fundraising activities that supported good causes.

“I guess I think that overall, in the scheme of things, we’ve shut down all of the flights — so if a flight like this takes off, people enjoy themselves, they get to see stuff that they wouldn’t have experienced before, and there’s some charity element to it as well, overall I think that’s a good thing,” she says.

As international travel continues to be curtailed, flights to nowhere are becoming more common.

In August, EVA Air operated a Taiwan-based flight to nowhere on on board its Hello Kitty-themed A330 Dream jet.

Meanwhile All Nipon Airways (ANA) also operated a short scenic flight in Japan in August, which the airline said sought to replicate “the Hawaiian resort experience,” with 300 travelers boarding the 1.5 hour flight.

And Qantas is currently planning chartered flights across Antarctica, starting in November, which will allow passengers on board a 787 Dreamliner to enjoy icy vistas in between taking off and landing from Sydney.

This story has been updated with comment from Friends of the Earth.