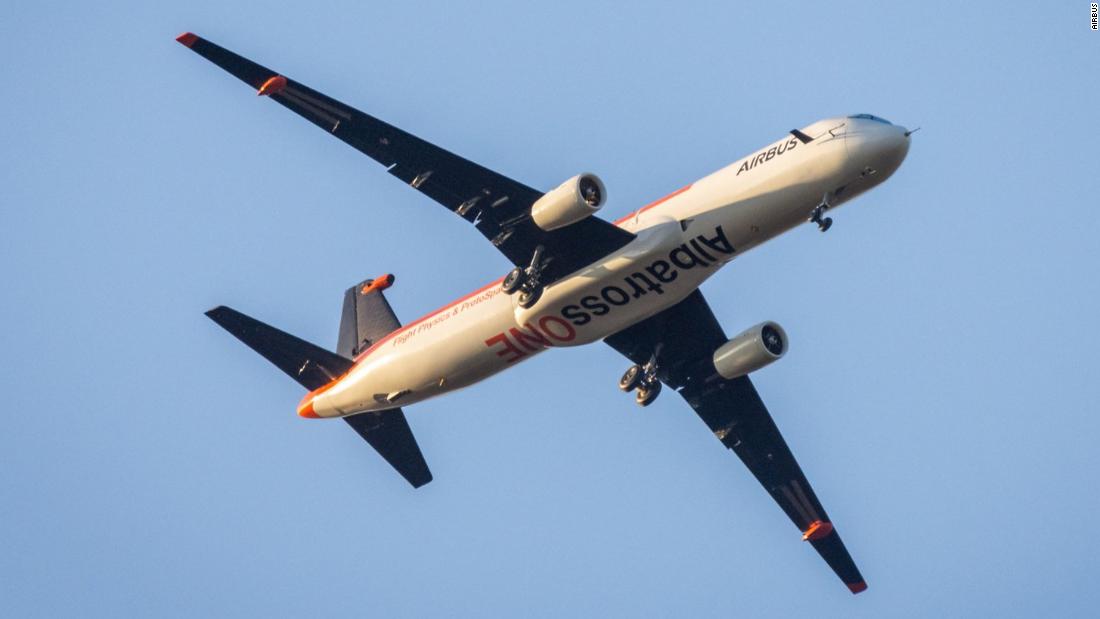 (CNN) — Since the dawn of aviation, birds have been an inspiration for visionaries of flight. And now, engineers are once again looking to feathered friends to inspire the next generation of aircraft wings.

Last year European manufacturer Airbus unveiled a small-scale aircraft with flapping wing tips — a concept drawn from the flight of the albatross.

The AlbatrossONE, a model based on the A321, is constructed from carbon-fiber and glass-fiber-reinforced polymers and has “semi-aeroelastic” hinged wing-tips.

The freely flapping wingtips react and flex to wind gusts, reducing drag and combating the effects of turbulence.

Now, following a successful first flight test campaign, the AlbatrossONE demonstrator has achieved a new milestone: a “gate-to-gate” demonstration with wing-tips that are 75% longer than those tested in the first phase.

Swing testing involves suspending an object like a pendulum. During this test, the AlbatrossONE demonstrator tested its mass properties.

AlbatrossOne chief engineer James Kirk added, “Now that proof-of-concept has been achieved at small scale, we’ll increase our efforts to mature the technology at a larger scale.”

The airplane’s flapping wing tips are inspired by the albatross.

The aircraft was inspired by the albatross, a sea bird able to stay in the air for hours in windy weather with little wing exertion.

“The concept of hinged wingtips is not new,” Wilson said last year.

“Military jets employ them to allow greater storage capacity on aircraft carriers. However, AlbatrossOne is the first aircraft to trial in-flight, freely flapping wing tips—which account for up to a third of the length of the wing,” he added.

The Airbus fello’fly flight demonstration project is investigating whether aerodynamic efficiency can be increased by flying two large commercial aircraft in formation, mimicking the flight patterns of birds.

It began initial testing in March 2020 with two A350s and the program will be expanded next year.

Airbus unveiled this bird-like conceptual airliner design with the goal of motivating the next generation of aeronautical engineers.

In July 2019, Airbus unveiled the “Bird of Prey” — a concept aircraft inspired by the natural features of eagles, hawks and other aerial predators.

Airbus has also turned to other parts of the natural world to for aircraft design solutions. For the past couple of years, the manufacturer has been fitting certain jetliners with small “riblet” patches — textured surfaces applied to the fuselages and wings that mimic the effect of sharkskin in an attempt to reduce drag during high-speed cruise flight.