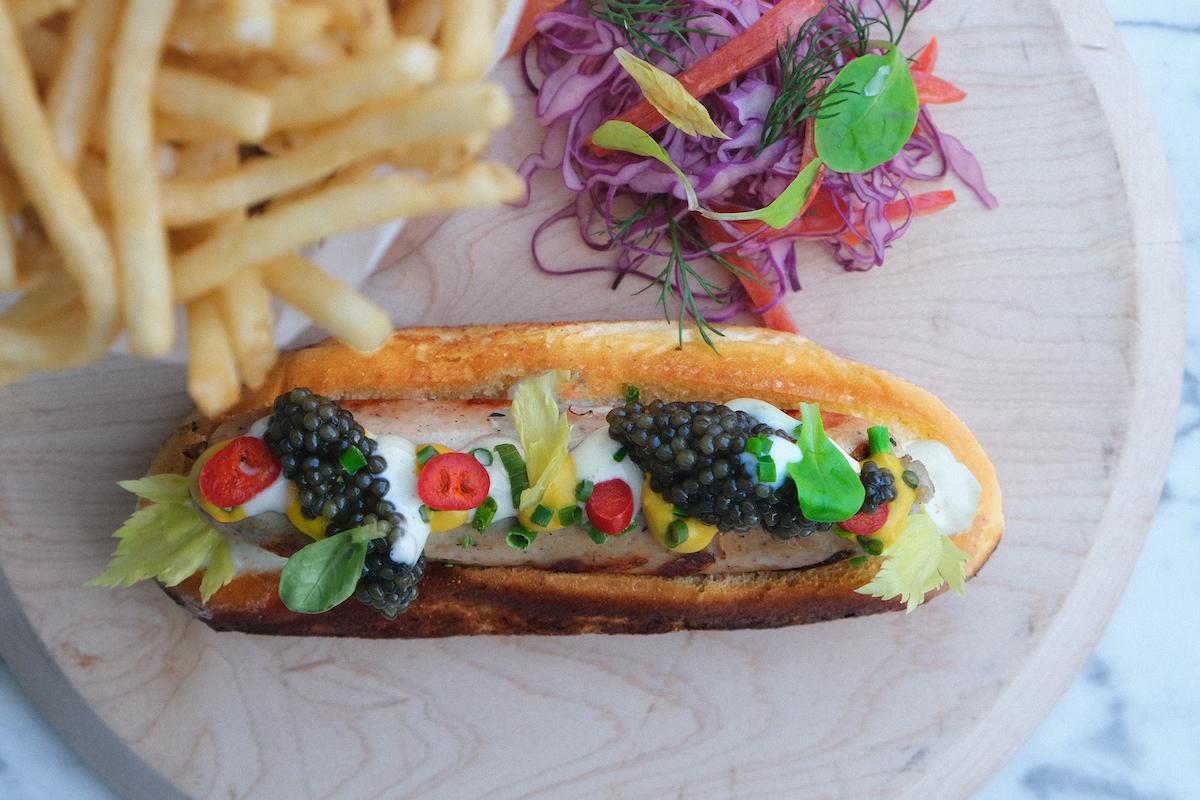 The classic New York City hot dog was just given a luxe upgrade, in the name of charity, of course. The Standard High Line, in Manhattan’s Meatpacking District, has released the city’s first “Yacht Dog”, a gourmet take on the humble street food classic to support the local hospitality community.

Exclusively available at The Standard Grill, the hot dog is served with a lemon chive aioli and topped with a generous portion of caviar for $75, or paired with a mini bottle of Moët & Chandon Imperial Brut for $99. All proceeds will be donated to ROAR (Relief Opportunities for All Restaurants). The Yacht Dog itself is comprised of a cheddar bratwurst (a mix of veal, pork, cheddar cheese, spices) served in a toasted Brioche hot dog bun and topped with relish, mustard, lime aioli, chives, pickled Fresno red chillies and Royal Transmontanus White Sturgeon caviar. It’s served with a side of french fries and red cabbage salad made with shredded red cabbage, julienne red pepper, celery leaves and lemon vinaigrette.

The splurge-worthy dog was designed in partnership with culinary consultant Zachary Weiss, and is available from 7 a.m.- 10 p.m. at The Standard Grill’s extended outdoor seating, adjoining sidewalk area and the hotel’s main courtyard, The Standard Plaza, where, on Monday and Tuesday evenings, outdoor movie screenings also take place.

“More than any slice of pizza, I’ve always been a fan of a New York City hot dog, whether it’s from a street cart or Gray’s Papaya, and I am always in support of a high-low pairing: champagne and fried chicken, Uni on a cheeseburger, you name it,” Weiss says of his inspiration for the Yacht Dog. “My chef pal Kevin O’Connor has this same mentality, so we kicked around a few ideas before landing on a caviar hot dog, which we felt was a beautiful marriage of outlandish luxury and a classic New York City staple. From there, we needed someone to serve it up for us, and I knew the Standard Hotels team were the only ones crazy enough to let me get away with such an absurd creation, with an absurd price tag to match, all in the name of a great cause.”

In testing the recipe, Weiss found that the textural components all fit naturally together. “It’s presented atop a light and airy bun, and the perfectly whipped lemon and chive aioli, which all seamlessly work together to create a dish that is much more dynamic in its flavor and, frankly, lighter than I had ever expected it to be.”

Beyond being delicious, Weiss is proud that his absurd creation will help preserve New York City’s strongest asses; Restaurants. “ROAR was one of the first organizations to speak up for the city’s restaurant community beyond posting an Instagram graphic, and their community of leaders have been relentless in their pursuit of securing the future of New York City’s dining scene,” he says. “Without it, there’s no New York.”