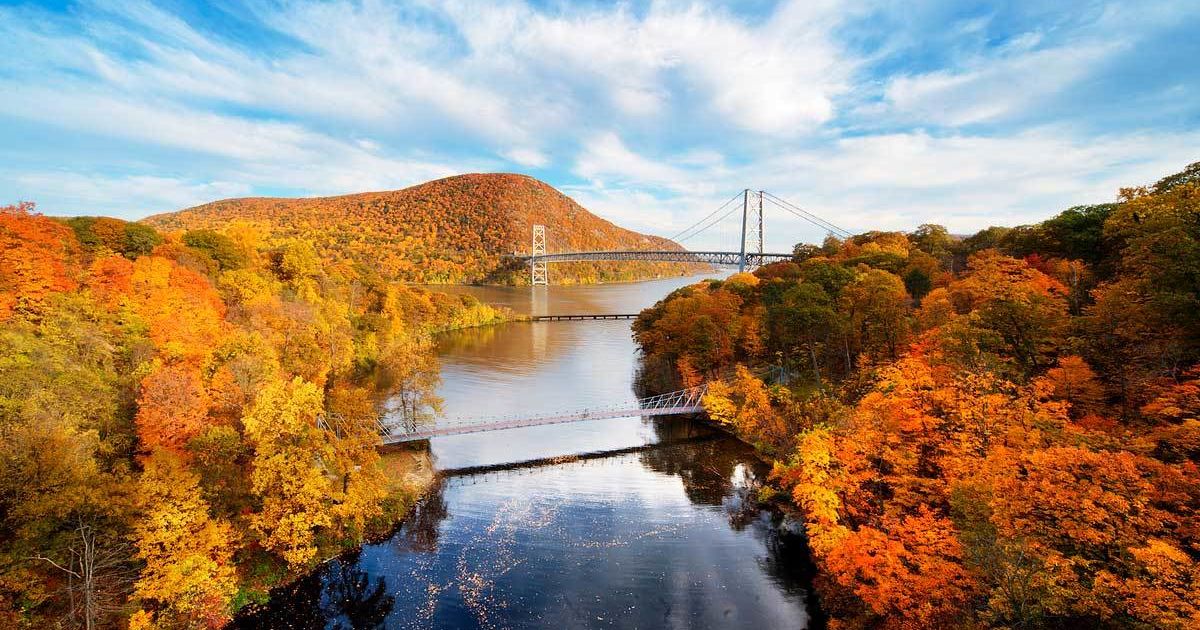 Fall 2020 is turning over new leaves quickly in parts of New York State.

So now, it’s a good time to jump on a road trip. Here are our suggested itineraries for a four-day road trip throughout upstate New York. However, read up on CDC and statewide COVID-19 mandates before heading out.

For reference, I Love New York, the state’s tourism board, puts out a weekly fall foliage map report on their website.

Where to Stop: Lake Placid tells about the 1980 Winter Games with present-day restaurants and attractions and is close to the High Peaks Wilderness. Its challenging 46 Peaks will reward you with sweeping foliage views. Eight miles from Lake Placid, Saranac Lake has a buzzing downtown with shops, galleries and restaurants, or see Saranac Lake 6ers, a close-by collection of six beautiful peaks.

Or jaunt along the scenic route to Tupper Lake and to the Wild Center, whose Wild Wild platformed trail heads across the treetops. The Tawahus Road leads to the Upper Works Trailhead, which provides an alternative route to traditional northern or eastern access to the High Peaks Wilderness. Trails at the Crown Point State Historic Site, on the shores of Lake Champlain, lead to two Revolutionary War-era fort ruins.

In Bolton Landing, Adirondack Extreme Adventure Course is the largest aerial tree-top adventure park in the U.S. The Lake George area is a premier hiking destination with unparalleled beauty of the Adirondacks. Some hikes, such as The Pinnacle, jaunt along wooded trails with a switchback or two to ease the climbing burden.

Where to eat: In Lake Placid, Golden Arrow’s restaurant, Generations, is open for breakfast, lunch, and dinner with grown and raised locally menu. Up the road from Crown Point State Historic Site, Gunnison’s Orchards & Bakery serves up fresh-baked pastries, bread, cookies, pies, and their cinnamon cider donuts. End your day at Ledge Hill Brewery, for handcrafted ales and lagers mindfully brewed in Westport.

Where to stop: Starting from the Helderberg Hilltowns, John Boyd Thacher State Park in Voorheesville is perched atop the Helderberg Escarpment, with panoramic views of the Hudson-Mohawk valleys and the Adirondack and Green mountains. After hiking along the park’s Indian Ladder Trail, take a nine-minute drive to Indian Ladder Farms in Altamont.  Kids can pick apples and pet farm animals and parents can unwind at the cidery and brewery tasting room. Lastly, at Falls View Park, marvel at Cohoes Falls, New York State’s second largest waterfall.

Where to eat: Nine Pin Cider, New York’s first farm cidery, has a tasting room in Albany’s Warehouse District, with a rotating selection. Find a traditional or a new flavorful spin on the apple cider donut at Cider Belly Doughnuts, in the heart of downtown Albany.

Where to stop: From New York City, first explore the lower Hudson Valley river towns, beginning in Tarrytown at the Lyndhurst Mansion along the Hudson River. Next, drive north to Garrison to see the Manitoga/The Russel Wright Design Center, the former home of industrial designer Russel Wright. Then, Dia:Beacon is a contemporary art museum in a Nabisco box-printing factory, whose exterior grounds were designed by artist Robert Irwin.

Head to the Walkway Over the Hudson, the world’s longest elevated pedestrian bridge connecting Poughkeepsie and Highland. From Highland, drive north approximately 25 minutes to Kingston to check out the historic waterfront district. Pumpkin and apple picking can be done at Samascott Farm Orchard and Golden Harvest Farms in nearby Valatie.

Where to stop: From the North, the Scenic Byway – Route 20’s scenery offers unique of shopping experiences.Lake Classic Outfitters will fit the bill at Sam Smith’s Boatyard and The Blue Mingo Grill overlooking Otsego Lake. In Cooperstown, find not only the National Baseball Hall of Fame and Museum, but also the Fenimore Art Museum and The Farmers’ Museum. Main Street is the visitor hub with baseball-themed shops, eateries and the home of Doubleday Field.

Where to eat:  Grab a bite to eat and an ice cream with a life-sized Elvis statue at Jerry’s Place just before reaching Cooperstown. Brooks’ House of BBQ is how to fill your belly when traveling from Oneonta in the south, or try a Bohemian-feel, experiential meal at Origins. In Cooperstown, Alex’s Bistro is a local favorite with flavor concoctions unmatched.

Where to stop: This trip takes you from Canandaigua along Routes 5 and 20 and down to Naples, home of the grape pie. County Road #12 Scenic Overlook, Kershaw Park and Onanda Park in Canandaigua offer scenic vistas and fresh lake water. In Naples, go to Artizanns for NY made souvenirs and stop by any of the local stands for Grape Pie. In Canandaigua, there’s a cute Main Street with all kinds of shops and a couple of roof top bars. Take a fun farm diversion to go to Lazy Acres Alpacas in Bloomfield.

Finger Lakes National Forest, the only national forest in New York State, is located on a ridge between Seneca and Cayuga lakes with over 30 miles of interconnecting trails. They include the 12-mile Interloken Trail, which is part of the Finger Lakes Trail Association network. The Keuka Lake Outlet Trail lies between the villages of Penn Yan and Dresden and measures nearly seven miles of wooded trail and along waterfalls.

Where to eat:  Ethnic diversity is noticeable in Canandaigua’s restaurant scene or check the craft breweries in the area. In Naples. Monica’s Pies is known for its grape pie and Brew and Brats at Arbor Hill has locally made sausages, pies, wine and beers.