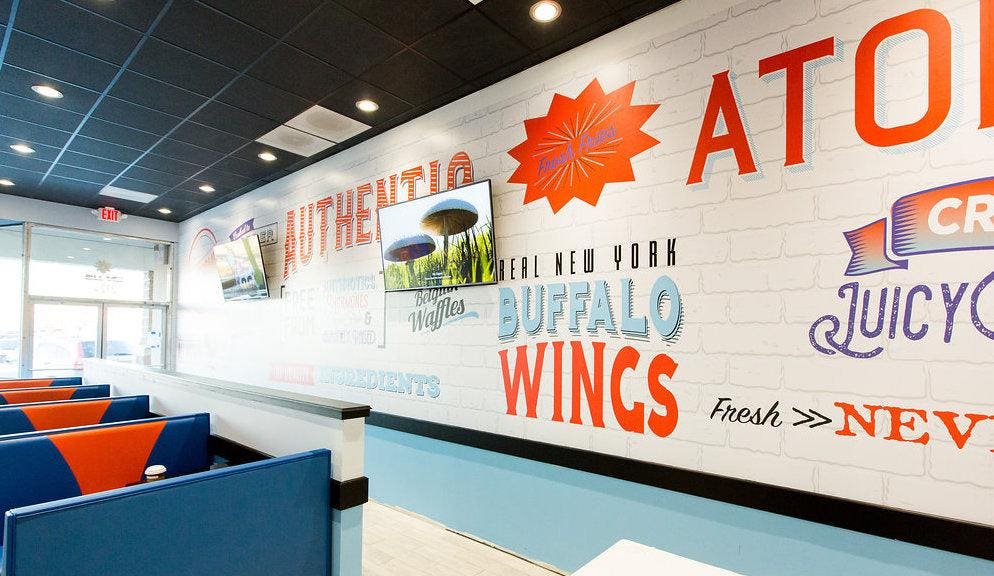 In Manhattan, Atomic Wings is known as one of the premiere places to go for spicy, tasty chicken wings. Buffalo has its Anchor Bar, but Manhattan has its signature Atomic Wings.

When the two owners, brothers Zak and Ray Omar, took over Atomic Wings in 2014 from founder Adam Lippin, it had only two locations. The brothers also operate eight Dunkin’ franchises and are savvy about the ins and outs of running a franchise.

Zak Omar serves as CEO, and Ray Omar as president. Ray focuses on real-estate development and construction, and Omar on operations, marketing and research and development.

Under their tutelage, it has grown to 11 locations—all franchised—in New York City, including Manhattan, Brooklyn and Queens, and in Connecticut and Maryland. In fact, it’s set to open six more outlets by the end of 2020.

But its two owners have set their sights on long-term, steady expansion. They have their eyes on expanding to 100 outposts in a five-year period.

Zak Omar, who was raised in Woodside, Queens, but whose corporate office is in College Park, Maryland, said that Atomic Wings for many years stayed small. “We never hired a team to go out and sell franchises. All the growth has happened organically, with people contacting us,” he reveals.

Despite the pandemic, Omar calls it “the perfect time to franchise. Our sales are up 100% because we’ve always been quick-service, take-out and delivery. We’re not inviting people to sit down and watch TV.”

“Now we have the infrastructure and the demand,” he says.  Atomic Wings prospered during a recession and during a pandemic. “The proof is in the pudding,” he says.

The pandemic was tough at the beginning for franchisees. To help them endure it, Atomic Wings slashed royalties in half to ease their burden.

It’s known for serving fresh chicken wings, never frozen. Omar says since its inception, “Our staff continues to cut up pieces of chicken, bread them, and fry them in our sauces.”

Atomic Wings competes with several chains such as Buffalo Wild Wings, Wingstop
and Wings Over but it was there first with wings in New York City, Omar says.

It has already signed contracts with a multi-unit operator out of Nevada and Arizona with a 10-store commitment. It’s in discussions in several states including Pennsylvania, New Jersey, Connecticut and Florida.

“I don’t want absentee ownership, who open the store and forget about it,” Omar notes. He prefers hands-on, actively involved, and on-site franchisees.

Its three most popular dishes are: bone-in Buffalo wings, boneless wings, and famous waffle fries. And its average check is $12.

But Zak Omar says it prides ourselves on constantly developing new recipes. “We want to be the flavor king of wings,” he explains.

Its sauces are gluten-free. Though its wings are fried, it offers wraps and salads for the health conscious who want to avoid high-calorie foods.

“But we’re not going away from our core competency.  Does McDonald’s
stray from burgers? Are people still eating donuts? Our food is all freshly cooked with fresh ingredients,” he emphasizes.

With its six new Atomic Wings, it’s expanding to New York City’s boroughs including the Bronx, Queens and Brooklyn.

The toughest part of franchising, he says, is ensuring consistency. It hires secret shoppers and Omar makes unannounced, surprise visits to franchised locations.

Upon visiting a site, he’s looking to ensure that the staff is wearing uniforms, the store is clean, he’s greeted by the cashier, and the wait isn’t too long. “I’m looking for wings that are crispy on the outside and juicy on the inside, and not overcooked,” he asserts.

But Omar expects it will reach 100 outlets before five years are up. “We’re working with experienced franchisees we know from Dunkin. We treat them like a small family,” he says.

Omar describes the three keys to its success as: 1) being able to adapt, 2) having a strong digital presence, 3) continuing to provide quality food.