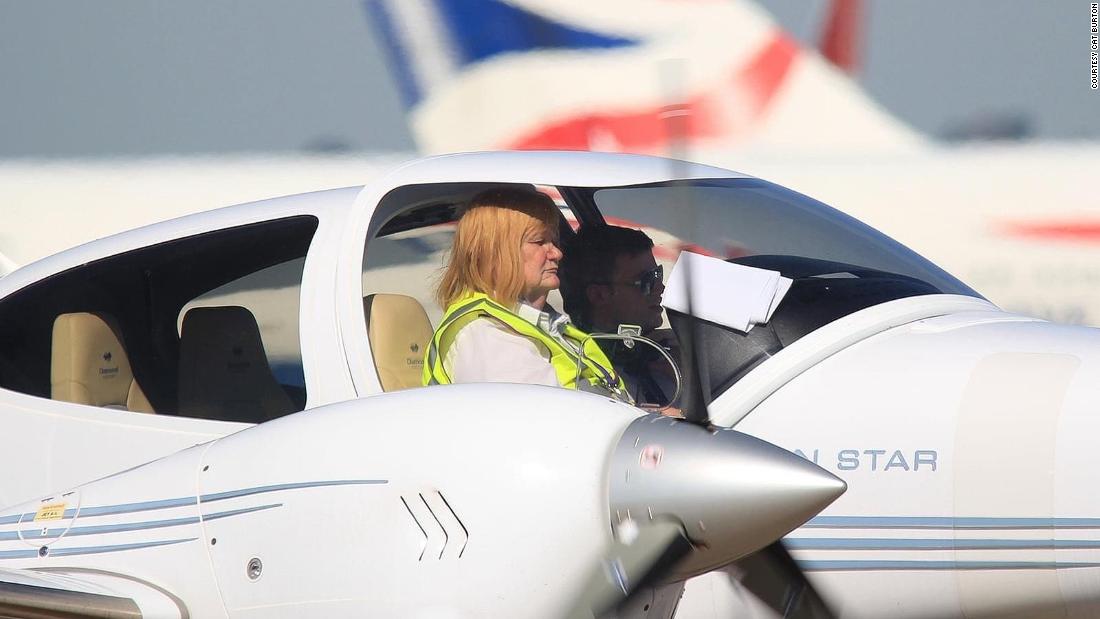 (CNN) — Cat Burton grew up fascinated by airplanes, an interest first fostered by her pilot father, who flew with the Royal Canadian Air Force and later with Welsh carrier Cambrian Airways.

Cambrian, a component company of British Airways, later sponsored Wales-born Burton to learn to fly in 1971.

Before long, Burton was a qualified aviator, operating Vickers Viscount airliners across the UK.

When British Airways absorbed Cambrian in 1974, Burton began a high-flying career with the UK’s flag carrier airline that would span four decades.

Her favorite airplane? The 747. There’s a reason, she says, why it’s dubbed “the Queen of the Skies.”

“I was privileged enough to be the very first line copilot to fly the 747-400, in British Airways. I fell in love with the airplane, everything about it.”

When Burton retired, aged 65, she was British Airways’ most senior female pilot.

The last few years of her BA career had been some of her proudest. She’d started going into schools to encourage young women to consider aviation careers and pursue science, tech engineering and math (STEM) subjects. She was working with British Airways diversity team. She was the STEM coordinator for the British Women Pilots’ Association.

And Burton was finally flying as herself. At 58, she had come out as trans.

“My transition came very late in life,” says Burton. “Flying in the ’70s was probably considered a macho occupation. It was one of those jobs where somebody who was trans could camouflage it, not only from the rest of the world, but often from themselves.”

Burton says she “bottled up” her gender identity as a teenager. It wasn’t until her late 50s, when she was grounded by the Civil Aviation Authority for a few months due to some heart issues, that Burton embraced her real self.

She made the decision that when she went back to work, it would be Cat who returned.

“Coming out is one of those irrevocable things, you can’t go back in again,” says Burton. “I always liken it to stepping off a cliff in pitch darkness.”

British Airways, in Burton’s words, were “absolutely exemplary.” The airline, says Burton, didn’t just support her, they were proud of her.

But she was still unsure how colleagues would react. You can never know, she points out, how even your oldest friends might respond when you come out.

But that cliff she’d stepped off turned out to be “only two inches high.”

“People use the word brave, but it’s not brave. Coming out in that circumstance is lifesaving. It’s that or there is no life,” says Burton. “So there was no bravery involved. But nevertheless, it was a step in the dark.”

When Burton returned to work as Cat, British Airways sent out official communication to the pilots on its roster. Burton decided to put out her own post about her transition, writing with candor and publishing on a British Airways message board.

There was, she says, “a lot of good-natured banter” from colleagues, but the joking was kind.

“You can tell the difference between somebody who’s laughing at you and laughing with you,” she says.

“It’s not brave. Coming out in that circumstance is lifesaving. It’s that or there is no life”

Several years later and post-retirement, Burton continues to inspire young people via her work as a flight instructor at Aeros Flight Training in Cardiff. Her days are spent conducting everything from trial lessons to pilot qualifications.

And she’s continued her STEM work in school visits, alongside further outreach related to diversity and aviation.

“It’s not that long since it was a complete career breaker for a trans woman to transition.”

Burton recalls a friend who transitioned while working as a pilot for a small British airline in the late 1980s.

“Within, I think, three months, she’d been bullied out of the job by her peers who just didn’t want to fly with her,” says Burton.

Times have changed, however, and the Equality Act of 2010 in the UK now protects against workplace discrimination.

But there are still steps forward to be made, says Burton.

On Burton’s last flight with British Airways before retirement, her airplane received a water salute in Punta Cana in the Dominican Republic.

Burton, who heads up Cardiff-based charity Race Equality First, is also vocal on the problem of race inequality in aviation.

Burton points to issues surrounding the steep cost of pilot training as a barrier to entry — and champions affirmative action and bursaries as potential solutions, as well as upping representation.

She also acknowledges that working in a white, male-dominated industry isn’t always easy for female and minority pilots.

“I suppose I’ve got a unique perspective on the male-female interface in a flight deck,” says Burton.

“I always considered myself to be very on side with my younger female copilots, when I was flying in my old gender role. And when I look back on it, with my fresh set of eyes, if you like, my fresh perspective, what I was actually being wasn’t supportive, it was being paternalistic. And I didn’t even realize it. I didn’t recognize it. But now I do.”

While working with British Airways’ diversity team, Burton says the airline “had huge numbers of young women complaining of the behavior of older — particularly older — male pilots, to them in the flight deck.”

The aim, she said, was to always get the male pilots to consider that, while their behavior might be well-intentioned, it was coming across as patronizing.

But Burton says younger pilots are more open-minded, and she hopes these issues will become a thing of the past as the pilot demographic gets younger.

While speaking about her life, she points out that all humans are made up of many different components — and no one component eclipses the others.

“My labels are Cat, I’m happy to accept that as a label, and the other label is human.

Everything else is an ingredient: woman, transgender history, pilot, experienced, British Airways captain, flying instructor. All of those things are things that make up Cat.”