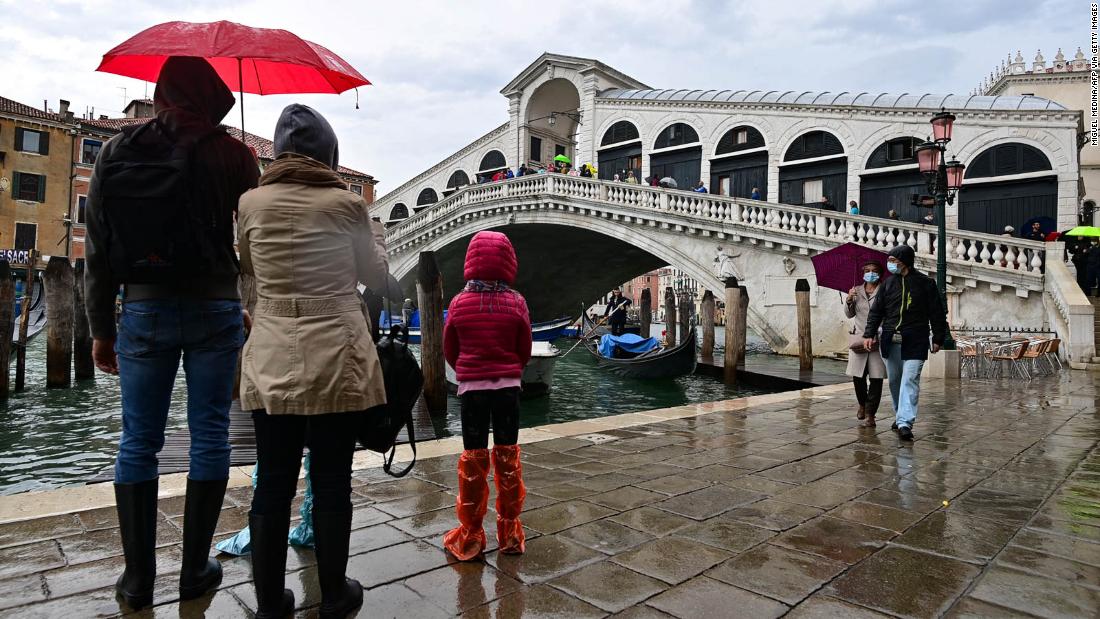 Venice, Italy (CNN) — Sebastian Fagarazzi is used to moving his belongings around. As a Venetian who lives on the ground floor, every time the city faces acqua alta — the regular flooding caused by high tides — he must raise everything off the floor, including furniture and appliances, or risk losing it.

But on October 3, with a 135-centimeter (53-inch) high tide forecast — which would normally see around half the city under various levels of water — when the flood sirens went off, he did nothing. “I had faith,” he says.

Saturday was the first acqua alta of the season for Venice. It was also the day when, after decades of delays, controversy and corruption, the city finally trialled its long-awaited flood barriers against the tide.

A previous trial in July, overseen by Italian Prime Minister Giuseppe Conte, had gone well — but that was in good weather, at low tide. Earlier trials had not managed to raise all 78 gates in the barriers that have been installed in the Venetian lagoon.

Against all the odds, it worked.

At 12.05 p.m., high tide, St Mark’s Square — which starts flooding at just 90 centimeters, and should have been knee-deep — was pretty much dry, with only large puddles welling up around the drains.

The square’s cafes and shops, which often have to close for hours on end, remained open.

And in the northern district of Cannaregio, Sebastian Fagarazzi’s home stayed dry.

“I’d heard the [warning] sirens in the morning but I didn’t raise any of my furniture this time because the barrier lifted on the last test, and I had faith that it would work,” Fagarazzi, co-founder of social initiative Venezia Autentica, says. “This is historic.”

The defense system is called MOSE, the Italian for Moses, a name derived from the more functional Modulo Sperimentale Elettromeccanico, meaning Electromagnetic Experimental Module. It consists of 78 flood barriers installed in the seabed at the lagoon’s three main entrance points.

When the high tide arrives, they can rise to form a dam, stopping the Adriatic Sea surging into the lagoon and flooding the city.

The new flood barrier in action at the Malamocco inlet off Venice’s Lido.

Venice’s acque alte (“high waters”) are normally seen between October and March, and last a couple of hours, predominantly affecting the two lowest (and most visited) areas of the city: San Marco and the area around the Rialto. The phenomenon is usually caused by a combination of exceptionally high tides, low atmospheric pressure and the presence of a southern sirocco wind.

In recent years, their frequency and severity have been increasing due to climate change. On November 12, 2019, the city was devastated by an acqua alta that reached 187 centimeters, with almost 90% of the city flooding. Businesses have struggled to recover since, with a sharp dip in tourist numbers on top of damage costs. The destruction, followed by the pandemic, has brought locals to their knees.

The MOSE project has been in the works since 1984, but has been so beset by delays and corruption that many Venetians never believed it would work.

“I was very skeptical — not least because they’ve spent so much money, without any result until now, so this morning I had minimal expectations,” she says.

“I was worried when I saw the tide predictions, then somewhere between incredulous and happy when it worked. You appreciate things more when you don’t expect it.”

Nearby, Federica Michielan, owner of bar Ae Bricoe, felt the same. “It’s great — it’s finally been resolved,” she says. “At least, I hope it has, because if it breaks, we’ll be under water.”

Tourists await the high tide in the center of Venice.

A test in poor weather conditions had been the next step for the MOSE, which is not yet completed. And on Friday, when a full moon and high winds were predicted for the following morning, the city council asked permission to raise the barriers.

The usual flood sirens rang throughout the city at around 8 a.m. Saturday, while the test started half an hour later. By 10.10, the barriers were fully raised — and while the water level rose to 132 centimeters outside the MOSE, inside the lagoon, it remained at 70 centimeters — enough to keep San Marco dry.

“This was a historic day for Venice,” Mayor Luigi Brugnaro, who had watched the raising of the barriers with MOSE special commissioner Elisabetta Spitz, later told journalists.

“There’s a huge satisfaction, having spent decades watching helplessly as the water arrived everywhere in the city, causing vast amounts of damage.

“We have shown, not only with a tide that would have flooded the city but also with a sirocco wind of 19 knots, that it works.”

While St. Mark’s Square stayed dry on October 3, it flooded the next day.

In the city, Venetians — many of whom had barricaded their property against the incoming water — could hardly believe their luck. At El Fornareto bakery in Cannaregio, locals grinned as they queued for bread in sneakers instead of the gumboots they’d usually be wearing. In the church of San Nicolò dei Mendicoli in the southern Dorsoduro district — which normally floods at 130 centimeters — the priest, don Paolo Bellio even referred to the success in his evening sermon.

“Today we were saved,” he said afterward. “We didn’t have to use the pumps. It was a surprise, but I’m happy it worked — especially as it has been so criticized. This is a day of joy for everyone.”

Calling it a “clear success,” commissioner Spitz underlined on Saturday that this is “only a fundamental step towards protecting the city and the lagoon.” The project — which also involves raising pavements in the lowest areas of the city to 110 centimeters, and permanent defense walls near the flood barriers — is due to be completed December 2021, when it will be handed over to the city.

Until then, it has been agreed that from now on, the barrier will be raised each time the tide hits 130 centimeters, meaning devastating floods such as last year’s should be a thing of the past (at least, in the medium term. Climate change means MOSE will not hold back the water indefinitely). However, once the city takes over, the barriers will go up earlier, at 110 centimeters.

People walk across elevated walkways outside St. Mark’s Basilica on St. Mark’s square in Venice as the flood barriers are tested.

What it does mean, however, is that acqua alta in St Mark’s Square — which floods at 90 centimeters — will continue. And indeed, on Sunday, just 24 hours after the MOSE triumph, the city’s iconic piazza was calf-deep in water, with a sea level of 106 centimeters.

As tourists snapped selfies and danced in the water, an air of resignation hung over the shops and cafes that had had to close — again.

At Quadri, one of the square’s most famous cafes, where everyone from Proust to Brangelina have sat beneath the mirrored walls, manager Roberto Pepe was beginning the clean-up operation.

Although high tide was at 12.25 p.m., he had kept the café closed all morning, to pile velvet chairs on raised tables and blockade the entrances. Not that it helped; even an hour after high tide, the odd napkin and coaster was still swimming on the green mosaic floors.

“As a Venetian I’m happy about yesterday, but as someone who works in Piazza San Marco, it changes nothing, and leaves a sour taste,” he says.

“We have the solution. Yesterday the piazza was dry. This is the day after the test, and look at it. We just want to work — this is the heart of the city, it provides so much work for so many people.

The barrier has been in the works since 1984, but beset by delays and corruption.

“We always approached acqua alta with resignation, but now it’s with disappointment because we know there’s a solution. We’ve waited 30 years — now let’s make it work.”

Mayor Brugnaro told CNN that MOSE’s success was a “comeback,” not just for Venice but for Italy as well, after the country’s heavy suffering during the pandemic. “Giving the sense of an easier, more normal city, even with a bit of acqua alta — because a few centimeters is nothing compared to devastation — I think it could show to the world that we have technology here, and it could become another economy to balance out tourism.”

Fagarazzi, meanwhile, is just relieved for now. “Last year was traumatic — you’d hear the sirens and it was unstoppable. I think we still haven’t comprehended how amazing the news is. This is a new day for Venice because it’s the first time in 1,200 years [since the seat of power moved to St Mark’s Square] that a high tide didn’t cause the city to be flooded.

“For Venetians, this feels like the first step of Armstrong on the moon.”