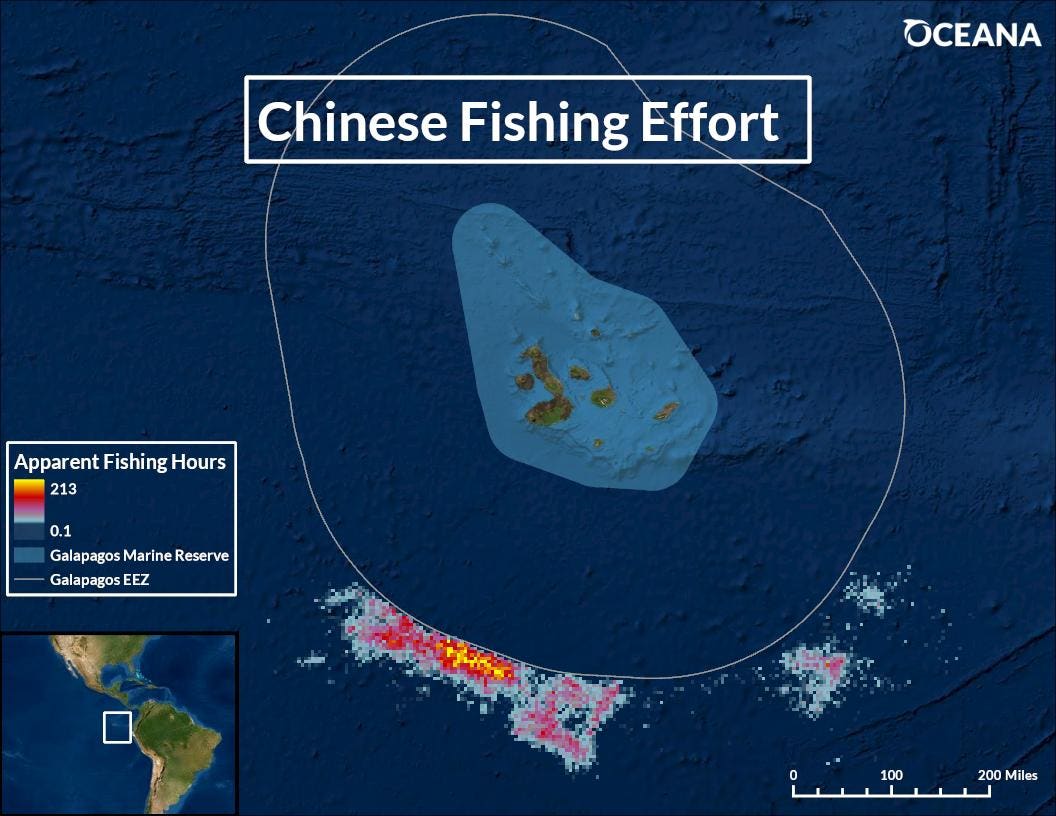 In August, the world turned its attention towards the tiny Galápagos archipelago when nearly 300 Chinese-flagged vessels were found fishing near the Ecuadorian EEZ that encompasses the biologically-significant islands, raising concerns about illegal and unregulated fishing. A new report by environmental non-profit Oceana claims that the vessels, now moving south through Peru, may be purposefully turning off their satellite trackers to avoid detection.

Prompted to investigate by past illegal fishing in the same area in 2017, Oceana analyzed data from satellite transponders on the squid-fishing vessels over a one-month period to track vessel movements and map fishing activity.

Automatic Identification Systems (AIS) on commercial vessels were originally used by ships to avoid collisions. A vessel’s identity, speed and location are automatically transmitted to satellite and terrestrial receivers at regular intervals. This publicly-available information is used by Global Fishing Watch, a public mapping tool developed by Oceana in collaboration with Google and SkyTruth, to visualize where vessels stop to fish, allowing for more scrutiny of potentially-illegal fishing activity.

“This is one of the first times that the concept of illegal fishing has captured the public imagination,” says Dr. Marla Valentine, illegal fishing and transparency analyst for Oceana, “currently we can only see 126 of the former 300 vessels.” The remaining vessels have seemingly vanished off the map, this is called ‘going dark’, and occurs when vessels disable their AIS.

A vessel is considered to have gone dark after it is undetectable for more than 24 hours, to rule out the possibility of poor satellite coverage. Using AIS is not mandatory on the high seas, and vessels do not need a legitimate reason to disable the trackers, but doing so in a certain way raises alarms; “you’ll see a vessel come up to a protected area, disappear, and reappear on the other side [of the protected area],” says Dr. Valentine. This suggests that the vessels are fishing inside of protected areas with AIS disabled to avoid detection, and switching the trackers back on once they have exited the area. Oceana tracked the instances in which vessels disappeared and reappeared. Some vessels went dark for several days to weeks.

China is the world’s largest producer of fish products, both wild-caught and farmed. According to the Food and Agriculture Organization’s The State of World Fisheries and Aquaculture 2020 report, China alone accounted for 15% of the 96.4 million tonnes of wild fish caught globally in 2018. The proportion of fisheries that are considered sustainable has dropped from 90% in 1974 to 65.8% in 2017. However, of the marine fish that are caught, almost 80% reportedly come from sustainable stocks.

The Chinese fleet is large and efficient, and because fishing for squid in international waters is not regulated, limits on how many squid can be caught don’t exist, Dr. Valentine says. 99% of the fishing activity that was seen off the Galápagos during the one-month period was carried out by Chinese-flagged vessels, although past Oceana reports show that fleets from other countries may be engaging in these behaviors as well.

Squid are important to the ecosystem

Squid make up an essential part of the diet for fur seals, hammerhead sharks, tuna and billfish. Dr.Valentine estimates that each fishing vessel removes thousands of squid per hour; “with a fleet this size, fishing with this much intensity, many of these prey items may be removed before reaching the Galápagos, where they would enter and support the local food web.” Overfishing depletes population levels and threatens the long-term health of fisheries.

“It’s important to know where fish is coming from,” says Dr. Valentine, “we don’t want to consume illegally-caught fish or fish taken from threatened populations.” By pressuring international governments to mandate the use of AIS and increase the availability of fisheries data, Oceana hopes to improve the transparency of the supply chain and make illegal activities less likely to occur.