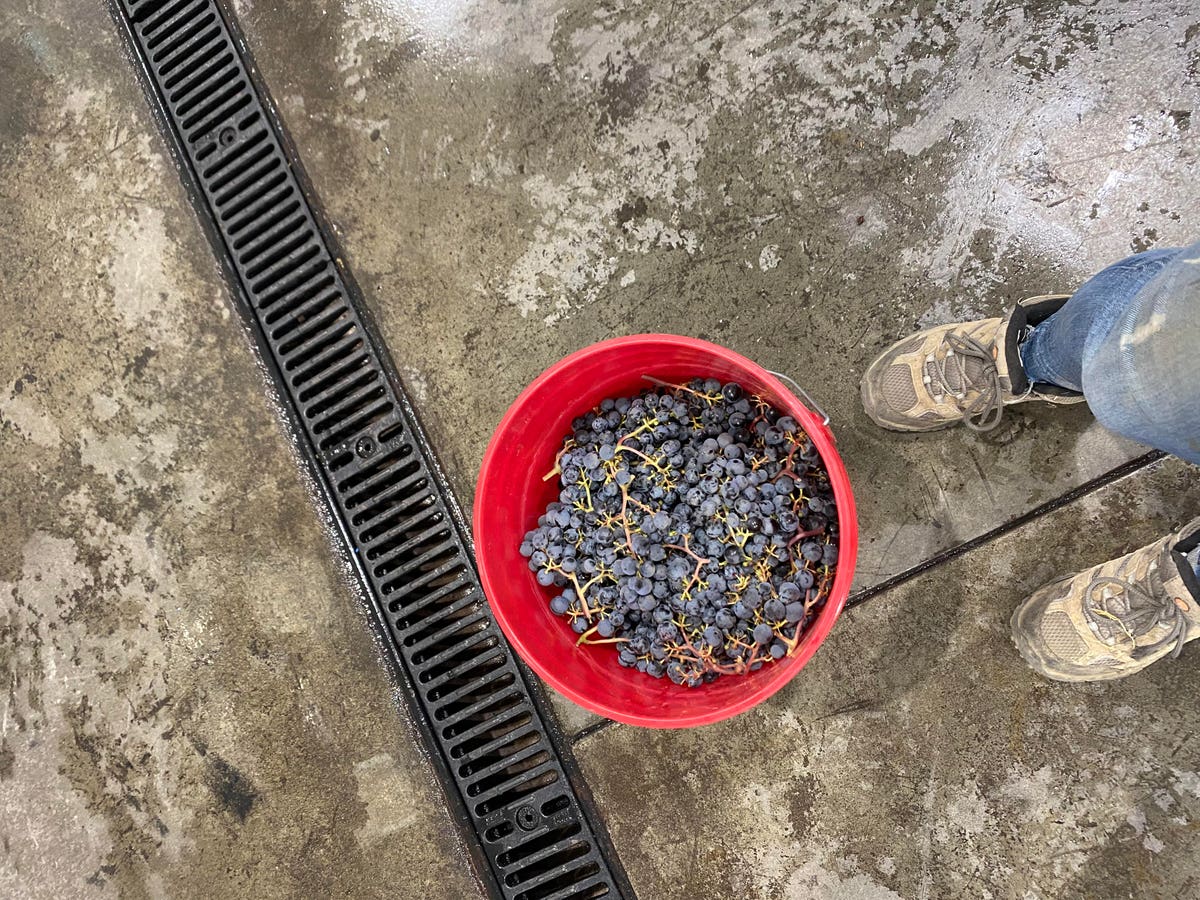 Ashley Trout is driving around with a bucket of fermenting wine in her front seat. A winemaker and winery owner in Walla Walla, Washington, Trout—like her neighbors—is trying to determine how a hazardous curtain of smoke from West Coast wildfires has impacted her vineyards at Brook & Bull and Vital Winery. Harvest should be underway by now, but the wine community in Walla Walla had to “push pause” right when they were ready, to evaluate how to move forward with this vintage.

“I’ve never wanted to make wine in a bucket before, but it’s 2020, so we are going to make some bucket wines and see how it goes,” says Trout. She’s not actually making this vintage of wine in the bucket, but she is letting a small amount of Malbec grapes and stems ferment under her supervision.

She’ll use her senses to watch for signs of smoke “taint” such as ashy or medicinal aromatics or flavors. It’s a tricky process—she can’t just pop a grape in her mouth and taste for problems—because of the way that compounds from smoke behave during and after the fermentation process, when flaws become easier to detect.

The micro-fermentation will offer clues, but that process takes about a week—so during this time, she’s keeping the bucket in her car to minimize contact with other people at the winery.

While Trout monitors her bucket, she’s also waiting on quantitative evaluations to come back from a sample she sent to a lab in Seattle. But, like waiting on fermentation, she can’t snap her fingers and have the information she needs.

The local facility that Trout would normally use, ETS Laboratories, has been overwhelmed with work from wineries near and far. A glance at the lab’s website today reveals a string of updates and a notice that smoke impact analysis for new clients won’t be processed until early November.

A list of alternatives is provided, so Trout and others are using out of town facilities. “Other labs have popped up,” says Trout, pointing out that Chateau Ste. Michelle—the largest wine producer in the state—has opened up their proprietary lab to others, calling them a “wonderful big brother to Washington state wineries.”

Trout shares that the ETS Laboratories team trained a competitor lab, food testing specialists, on how to analyze wine samples for smoke taint in an effort to help more local wineries get the information they need.

Each sample represents a slice of the big picture: “Not only is it vineyard to vineyard, it’s variety to variety,” says Trout. “I would guess that everyone is sending in every sample. It’s better to “know now and not make the wine. It’s cheaper in the long run.”

As these results come in, wineries and growers will consider findings from the lab and their own intuition to map out what happens next. “We will have a lot of decisions to make over the next couple of days,” says Trout.

The grapes may be fine, of course. It’s also possible that a sample will reveal that certain grapes are on a threshold, prompting a winemaker to rely on personal instinct to make “artistic moves.” If a sample falls at the extreme end of the scale, a grower may opt to “cancel the pick.”

“Even with the numbers, certain wines will present as more palatable,” says Trout. “One could get a wine to the point where it’s beautiful.” Red wines, with their inherent skin contact are particularly vulnerable, so some winemakers may choose to craft a special release rosé, for example—which is made with less skin-contact—rather than discard grapes that show some potential. White wines, which don’t rely on skin contact, can come out even more favorably.

And there is some good news, a “massive saving grace.” The week of pause had very little sun thanks to rainy days (and, ironically, the shadow of the smoke) and this prevented the grapes from ripening further. Even though she’s had to push back harvest for a week or so, Trout thinks the timing will be acceptable.

Also good news: Trout has heard that some of her neighbors are starting to get results back from their lab analyses and they are “drastically better” than they’d feared.

Still, she says that vintage 2020 has been emotionally taxing. Harvest is what everyone waits for, not only for professional reasons, but because they love what they do and this time of year is packed with energy. “Even if we come out scot-free, we feel screwed,” says Trout. “We are promised the big excitement and the bummer is: this matters for our community.”

“We are good group of people in this town, and we’re going to find some silver linings, if we have to pull them from the cold hands of 2020,” says Trout. As her bucket ferments and her sample gets processed in Seattle, she waits and considers how she’ll move forward when she knows more. “In the next seven days, everyone will figure out their decisions.”