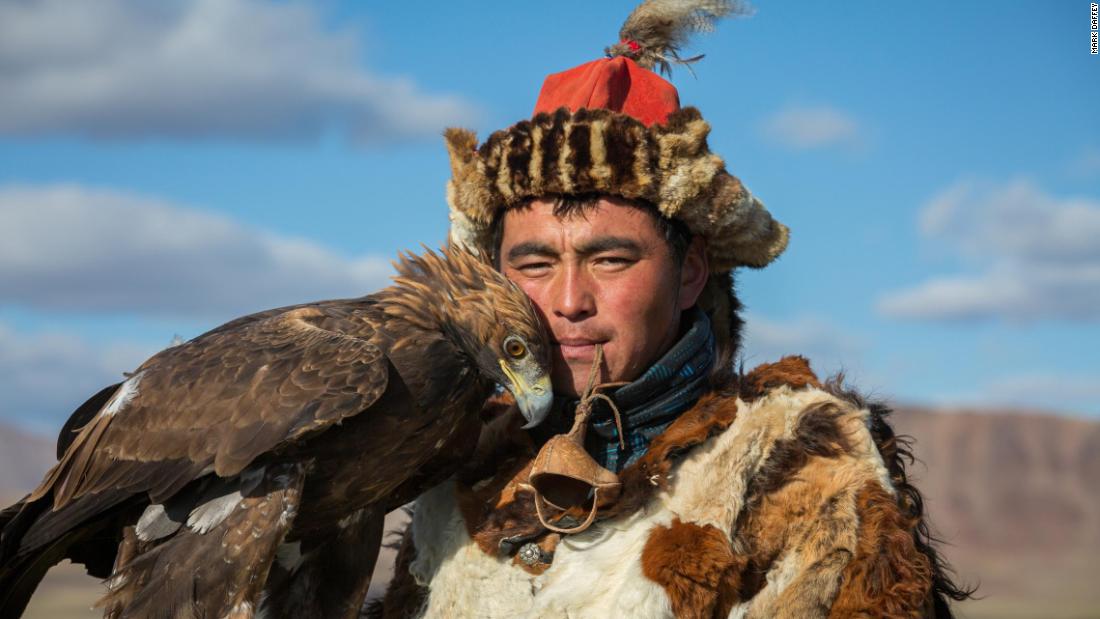 Galloping towards us on a stout Mongolian steed is the nomad’s version of Brad Pitt returning home in “Legends of the Fall.” Bundled inside a pinto jacket above richly embroidered trousers, he certainly catches the eye. A fox fur hat warms his head, and perched calmly on his right forearm is a golden eagle that’s not merely a prop for a cheesy cologne advertisement.

“Look at his eyebrows and his cheekbones,” continues our Intrepid Travel guide. “And look at how big and strong he is. The girls go crazy over him.”

“It’s true,” says Timur’s wife, Bata, blushing slightly. “If I was to compare him with Timur just on looks, of course I would choose him.”

Upon closer inspection, the intruder’s weathered face betrays a life lived outdoors. But his jaw is certainly chiseled and his natural squint reminds me of a youthful Clint Eastwood as he gazes off into the distance.

Arguably more impressive though is his stature, which I only begin to appreciate once he stands beside four other berkutchi, or eagle hunters, who have assembled in front of us for a scheduled photo shoot and interview session. He’s close to a head taller, with broad, square shoulders and muscular limbs that are further exaggerated by his bulky attire.

His name is Jenisbek Tserik, an appellation that means “steel warrior” — an apt description given his achievements. A master horseman, he’s also a serial winner of tug-of-war competitions pitting two combatants wrestling a goat carcass.

So adept is Jenisbek that he has been flown to Dubai to compete in exhibition events. For a semi-nomadic Kazakh living in Mongolia’s remote, westernmost province of Bayan-Ölgii, any trip abroad would be like visiting another planet. Glitzy Dubai would be a whole different universe.

Aged 26, Jenisbek tells us he’s not married, then jokes that he has five girlfriends, including one in Dubai and another in Kazakhstan, from where 90% of Bayan-Ölgii’s resident population originates. I’m unsure if he’s serious, but from what Timur and Bata have told me about him, it’s not beyond the realms of possibility.

As well as the tug-of-war, Jenisbek is a champion archer, and he’s won numerous awards for eagle hunting in Bayan-Ölgii, where the centuries-old pastime is more widespread than anywhere else on the planet.

Aged 26, Jenisbek says he’s not married — but has five girlfriends.

Eagle hunting can be traced back to a forgotten kingdom in Central Asia, where direct descendants of Genghis Khan settled by the Aral Sea until encroaching Russian Empire forces compelled them to flee to the lawless region of the Altai Mountains in Mongolia.

Then, when the Soviet Union and China established borders either side of them early in the 20th century, the Kazakhs became cut off from their homeland and were unable to return.

They continued to live as semi-nomadic herders in Western Mongolia, where traditional pastimes such as hunting with golden eagles continued, passing from one generation to the next. Since such practices were suppressed in Kazakhstan during Soviet rule, Bayan-Ölgii became the sport’s nucleus.

“For a Mongol, it’s pride thing to train racehorses. For Kazakhs, their pride is in training eagles to hunt,” explains Bata.

You can see it in the way they walk and how they behave. The five berkutchi know they’re being watched and they play up to it, puffing their chests out and stiffening their backs whenever a camera lens points their way. Brows furrow and lips purse like they’ve been modeling all their lives.

It’s a far cry from how life must have been in this part of the world before tourism impinged following the first Golden Eagle Festival, which was staged outside the provincial capital of Ölgii in 1999. But even now, foreigners are hardly stampeding to get here. When I quiz our local facilitator about numbers visiting the region this season, he replies that there are “many.”

From October to March, eagle hunters head off into the mountains in pairs — one to flush out their prey, the other to release the eagle from high along a ridgeline.

Numbers peak around the timing of the festival in early October, and during the smaller scale Altai Kazakh Eagle Festival, held here in Sagsai two weeks earlier. In each, as many as 100 berkutchi test their skills in events where eagles are expected to catch fox skins being dragged behind horses or in races to scoop up a coin off the ground on horseback.

One flirtatious contest involves a whip-cracking woman chasing after a man who doesn’t always try overly hard to escape. I could imagine Jenisbek receiving a disproportionate share of lashings these past few years.

But it’s only once the tourists have gone that the eagle hunting season begins. From October to March, hunters head off into the mountains in pairs — one to flush out their prey, the other to release the eagle from high along a ridgeline.

Prize catches includes foxes and hares, whose luxuriant coats make the warmest hats, just like those crowning Jenisbek and his companions.

Hunts can last for days at a time, and training requires patience as the eagles become accustomed to their handlers and develop the required skills.

Has it caused couples to divorce, I ask Timur, when husbands spend more time with their birds than they do with their wife? He shrugs his shoulders.

When every unmarried woman in the valley is lining up for you, like they are for Jenisbek, who needs a wife?

Getting there: Though Mongolia is currently closed to tourism due to the Covid-19 pandemic, a number of tour companies are now accepting bookings for for the 2021 Golden Eagle Festival in Bayan-Ulgii, which takes place in early October.