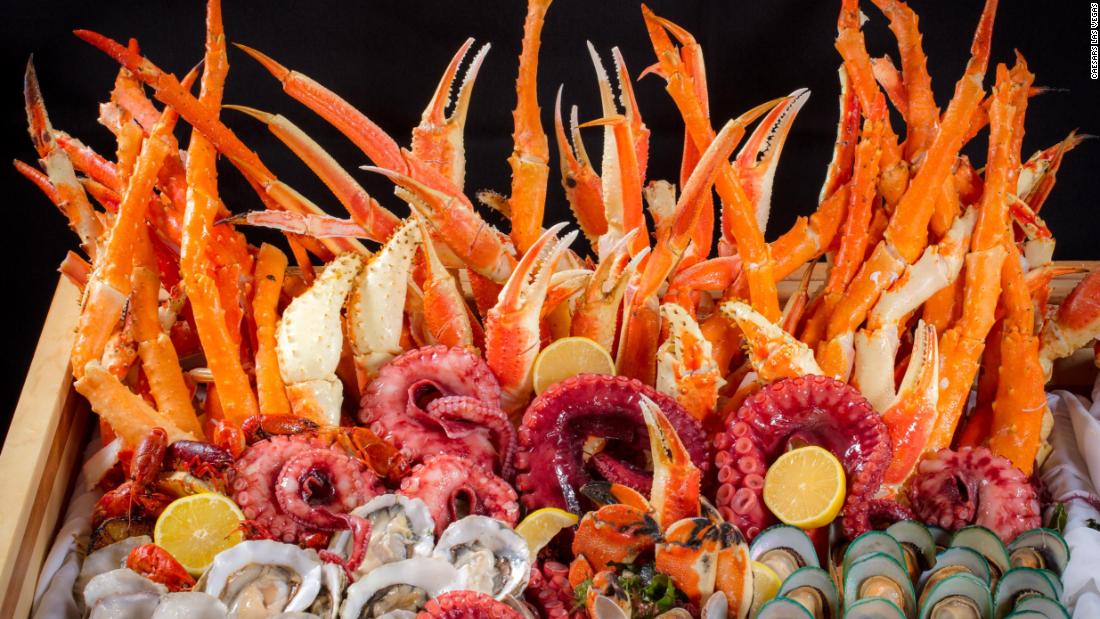 Yeskel, a Las Vegas travel writer known as “The Vegas Guru,” remembers the endless supplies of caviar at the Bellagio. The Peking duck pancakes made to order at the Wynn. The foie gras peanut-butter-and-jelly at the Bacchanal Buffet at Caesars. Endless stacks of crab legs and racks of spare ribs and crocks of chocolate mousse.

The buffets could cost a pretty casino chip — $40 and $50 and even $100 a head — but it was Vegas, baby. They were temples to appetite; they filled tourists with wonder.

“There’s nothing like them in any other destination for both quantity and quality,” he says in a phone call. “The Vegas buffet had become an iconic thing in its own way. They were over the top, like everything else in Vegas, with delicacies you’d find at no other buffet anywhere else.”

Those days weren’t so long ago.

But now, in the Covid-19 world, the high-end all-you-can-eat Vegas buffets have been mostly shuttered, with a handful of exceptions. The buffet at the Wynn, which reopened in June with guests ordering from servers who delivered their food to the table — close to a standard restaurant operation, in other words — closed in early September “based upon guest feedback,” the hotel said in a statement.

The buffet at the Wynn Las Vegas recently closed after reopening in June.

The same challenges cloud other tourist magnets where “all-you-can-eat buffet” is a byword for a luxe — or at least generous — experience. In some cases, such as hotels with their breakfast spreads, it’s simply being adjusted: instead of a free-for-all of open food pans, for example, some hotels are employing servers while others are packaging meals.

But for others, the all-you-can-eat buffet is symbolic of a world that’s stopped. The cruise industry, most notably, mostly remains on lockdown while it awaits approved protocols for reopening US operations.
Cruise lines are still working out how their popular buffets might work in a Covid-19 world. Norwegian Cruise Line says buffets will be full service with staff on hand to serve guests, according to its revised health and safety guidelines, and Royal Caribbean executives have indicated plans to modify, but not abandon, its Windjammer buffet.

Both cruise lines and Vegas have taken hard hits.

Carnival, the world’s largest cruise company, lost $4.4 billion in a single quarter earlier this year and another $2.9 billion more recently. Last month, MGM Resorts — the Las Vegas Strip’s top casino operator — announced it would lay off 18,000 employees nationwide, including a substantial number in the city.

With the many precautions prompted by Covid-19, the all-you-can-eat buffet will almost certainly have to evolve, says Lu Lu, a professor at Temple University’s School of Sport, Tourism and Hospitality Management. On the one hand, people like to see the food display, an experience in itself. On the other, people also want assurances that the experience will be safe, she says.

“[The management] will have to try to create a message that they are preparing a variety of safety and health messages to welcome visitors,” Lu says.

The Bacchanal Buffet at Caesars Palace Las Vegas is temporarily closed, according to its website.

The rise of the extreme buffet

Neither Las Vegas nor the cruise ship industry invented the all-you-can-eat buffet.

The idea originated in 16th-century Sweden, starting with a small spread called the brannvinsbord. That evolved into the smorgasbord in the 18th century. Smorgasbords gained global exposure after the 1912 Stockholm Olympics, and they were featured at the Swedish pavilion at the 1939 New York World’s Fair.

But it was a Vegas casino manager, Herb McDonald, who took the idea to its American extreme. In 1945, McDonald’s El Rancho casino opened a 24-hour buffet and charged visitors a single dollar to partake. Naturally the opportunity for endless food drew a crowd, and the idea became as much a staple in town as free drinks, neon signs and Wayne Newton.

Vegas being Vegas, the next step was ramping it up, first at the Bellagio, then at the other casino resorts.

The idea, says restaurateur Elizabeth Blau, who helped create the buffets at the Bellagio, the Wynn and the Beau Rivage, was to “create something closer to a fine dining experience.”

“When you go to great hotels of every caliber in Europe, there’s always a continental buffet breakfast, and it’s hugely prevalent in Asia as well,” says Blau, now the CEO of restaurant development company Blau + Associates. “But the Las Vegas casino buffet is uniquely American.”

The Bellagio, for example, featured several action stations and a number of open kitchens preparing the food directly in front of the guest. These buffets, unlike their predecessors, were profit centers in themselves, Blau says.

Royal Caribbean is expected to modify its buffet offering aboard cruise ships.

On modern cruise ships — the kind that really got underway in the 1970s “Love Boat” era — the idea simply made sense, says Stewart Chiron, a travel-marketing expert known as “The Cruise Guy.”

“It’s not a sales draw. It’s just always been a part of the experience when modern cruising launched. There’s no other way to feed so many people in an expeditious manner,” he says.

Right now, in the complex, highly integrated ecosystem that is modern travel, the survival of the buffets is connected to everything else: the re-emergence of air travel, trust in hotel hygiene, spur-of-the-moment dining decisions and the ability to congregate in large groups, observes Usha Haley, W. Frank Barton Distinguished Chair in International Business at Wichita State University.

“It’s all part of a larger web,” says Haley, who specializes in trade issues. She says that buffets, in general, have been on a downward trend for more than two decades now — more than a fifth have closed since the 1990s — so for the style to survive, it will have to reinvent itself.

“The tiny silver lining in this absolute catastrophe is that we’ll have to do things smarter and better,” she says. Vegas already has high sanitary standards, she says — it has to, given the mix of foods and preparation protocols. Now the hospitality community will have to find a way to accommodate the biggest unknown: the guests.

The cruise ship business, too, will have to make adjustments.

Chiron counters the image of the ships as “floating petri dishes” by noting that they already have strong hygiene protocols that come into play for outbreaks of illness, such as increased cleaning, reduced interaction between guests and no self-service at the buffets.

Moreover, buffet serving styles have changed over the last 25 years, he points out. “Most of them are now done at separate stations. Previous procedures would more than likely be made more permanent with gloved crewmembers serving passengers,” he says.

In Vegas, one of the few buffets that’s reopened successfully is the Wicked Spoon at The Cosmopolitan, which has long differed from its competitors by individually plating most of its dishes. According to an article in the Las Vegas Review-Tribune, its primary change is in serving: instead of the guest taking the plate, servers hand them over individually. (Another reopened buffet, the South Point Casino’s Garden Buffet, also has staff serve guests.)

The buffet restaurant at the Wynn Las Vegas is currently closed.

Temple’s Lu says American-style buffets can take a lesson from their counterparts in China, where high-end buffets are a place for sophisticated social outings — the kind of venue you’d go on a nice date, with fine cuisine and great visual appeal (if smaller portions).

“In China, most of the places are back to normal,” says Lu, a native of the country who still has many contacts there. “I don’t think human nature will be that different by nationality, so we should look at the countries who are ahead of the curve.”

Similarly Doug Parker, who runs cruiseradio.net, a website and podcast for cruise news, says he’s watching Europe and Asia “with a close eye to see what is working. Table capacity is limited and also spread out, with the six feet of separation between each table.”

And Yeskel is confident that Las Vegas — and its eateries — will rise again, even though there will be starts and stops in the short term. After all, what better place to be creative than an unlikely amusement park-like city carved out of the desert?

“I like to think that Vegas has always been the most innovative tourist destination on Earth, and it will find a way back — probably before other sectors of the industry,” he says. “It will lead the way.”