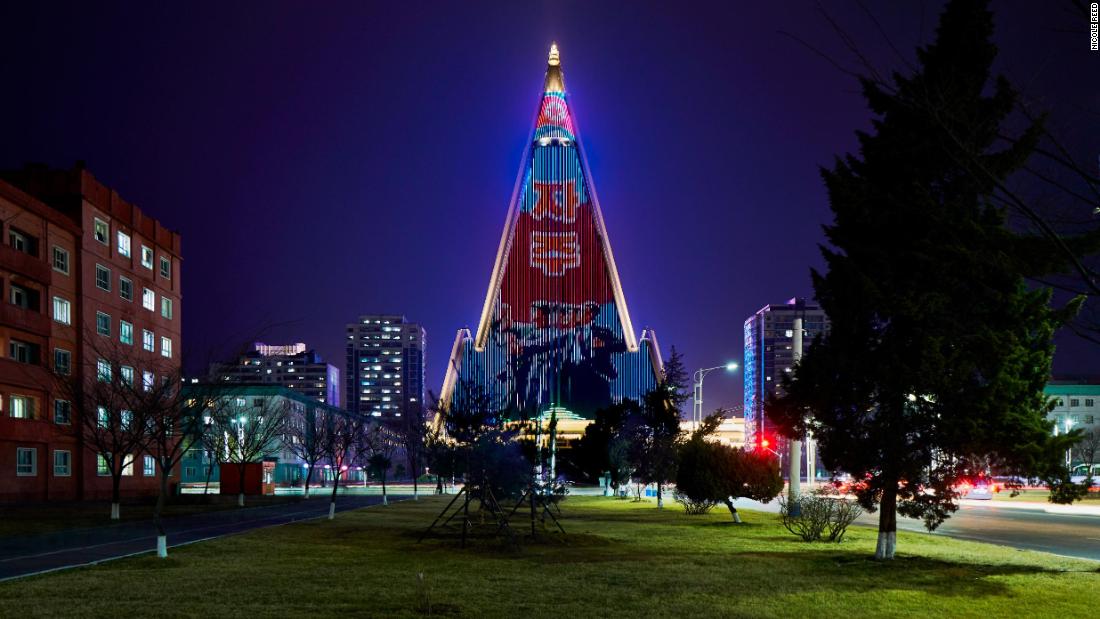 Hong Kong (CNN) — For many travelers, spending a lot of time in a hotel means you haven’t properly gone out and enjoyed a destination.

For James Scullin, who has visited the Hermit Kingdom eight times, hotels were the highlight of the trip — and one of the only ways to get to know locals in a social setting.

That’s the premise of his new self-published book “Hotels of Pyongyang,” with text by Scullin and photographs by Nicole Reed.

“So much of the world is globalized now. There are so few places you can go to that have a bespoke culture and look and feel,” Scullin says.

After moving from China back to his native Melbourne, he connected with Reed, who focuses on portraiture and architecture photography. The two spent five days together in Pyongyang photographing hotels and the people who work in them.

North Korea has so many interesting buildings and structures to take pictures of that one question looms — why hotels?

Scullin first visited the country as part of an approved tour group, then volunteered to start leading trips for the company himself. As he got more familiar with the layout of Pyongyang, he’d notice other hotels that he hadn’t stayed in before and would ask his guides if it was okay to visit them.

“You go to the same places all the time — you go to the same museums, monuments, metro stations,” Scullin says. As all tourism to North Korea is tightly controlled by the government, travelers generally stick to places like the DMZ and Kim Il Sung Square.

Hotels provided one of the only safe ways for a foreign visitor to get some variety without going somewhere on the danger list.

“I wanted to personally explore these hotels, but also document these hotels in Pyongyang that service international travelers,” he explains.

“It’s ironic that a country that is so isolationist would have such a bevy of hotels. I think that juxtaposition really started the idea (of the book). Hotels are the North Korea they want to show to foreigners. What does an isolationist country want people to come away with by visiting? It’s visual deceit, in a way.”

Karaoke is big business in Pyongyang, and the karaoke room at the Sosan Hotel reportedly has the widest English-language selection.

Reed noticed one thing quickly when she got to Pyongyang — her drink of choice.

“Coffee was a big thing for me,” she says. “We couldn’t get coffee anywhere but the cafes in hotels. So those were a highlight.”

But these cafes also ended up becoming some of Reed’s favorite places for more reasons than the availability of caffeine.

She was keen to photograph some of the people who worked in the hotels, and doing so often required negotiation with hotel managers or other executives. During the down time, she and Scullin were able to just chit chat with the North Korean workers and get to know them casually, just as people do with new friends in coffee shops all over the world.

The hotels had a mix of amenities. Bars, karaoke rooms and pools were nearly everywhere, but there was no room service or Wi-Fi. The Koryo, which both Scullin and Reed cited as a personal favorite, has a revolving restaurant on the top floor.

Scullin compares the interior design of many of the hotels to Wes Anderson movies — bright primary colors, color blocking and symmetry. Each hotel also has its own insignia. For tourists who are used to hotel logos, that may not seem noteworthy. However, North Korea is generally free of branding — there are no advertisements, no TV commercials and no billboards.

These otherwise innocuous insignias help each hotel to stand apart, but they also belie an imagination just below the seemingly uniform surface.

And despite the fact that all hotels in the country are state-owned, each has different management and was designed by different people, thus providing a rare creative outlet.

“Creativity exists under any circumstance,” he says. “The hotels are, in essence, an excuse for someone to let those ideas out.”

There were some things, though, that the cameras couldn’t capture. Scullin says that a major contributor to the overall “vibe” of the country was the omnipresent North Korean revolutionary songs, which were always playing in the background at hotels.

This pool is at the Koryo, Pyongyang’s second-largest hotel.

Normally, Reed explains, when she’s on a photo shoot she works by “tethering” her camera to her laptop, allowing her to see and adjust images in real time. But she didn’t want to bring her laptop with her to North Korea, so she traveled with only her most basic equipment.

Though she only spent five days in the country, she feels that her trip was more meaningful than usual because she didn’t spend hours of her day on her computer or using social media.

“I didn’t know how I was going to be able to cope without my phone but after about half a day of not having that technology, I just loved it,” she says. “I took so much more notice of my surroundings and the people I was with. It allows you to have a lot more time in the space.”

Scullin agrees, and he has seen the way that people on the group trips he organized had a deeper experience without their omnipresent phones. It also encourages more conversations, since people aren’t glued to Twitter or Instagram.

“You need to find opportunities to mingle,” he says to would-be visitors to Pyongyang. “If you have a good relationship with guides and ask ‘can we go for a walk tonight?’ they will call their boss and ask if they’re allowed to take you somewhere.”

Both Scullin and Reed say that some of their most fascinating experiences were simple ones, like watching North Korean locals shop in a grocery store, sing in a karaoke room or visit a spa.

Yet it was in hotels where the most meaningful interpersonal interactions took place.

“There are places that locals go to but that foreigners aren’t allowed, so you hang out at the hotel. A lot of people see that as entrapment, but for me it’s great because it’s where you can hang out with the guides,” says Scullin.

“As long as you don’t talk about Kim Jong Un or missile programs, you can have really interesting conversations. That’s what is really appealing to me about spending time in those hotels. Those guides have a lot to share about the country if you can talk about it in a respectful way.”