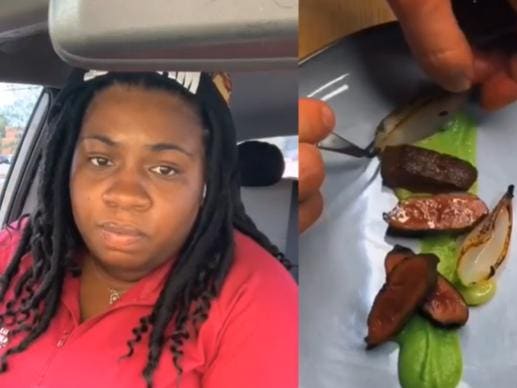 Meet the smooth, soothing voice the year of 2020 needed: @Dayne_n_Simple.

On Tuesday the Instagram followers of @Dayne_n_Simple, whose real name is Dana Caldwell, swelled from under 10,000 to more than 36,100 (as of publication) following her voice-over duet getting the attention of legendary American rapper Snoop Dogg.

Snoop Dogg’s feature of Caldwell, 28, held the simple caption, “The black Mama Stewart.” Homemaker icon Martha Stewart is a close personal friend to Snoop Dogg. When the Mississippi native saw the rapper feature her video, she counted it as a blessing, saying, in part, “It was unreal … I appreciated him for appreciating me.”

He appreciated her so much that Snoop Dogg suggested the two of them work together one day in Caldwell’s direct messages, which elated Caldwell.

Her journey to celebrity recognition has been a quick one as she just started these cooking duets about a week ago.

“People fell in love with the way I said decadent and decadence,” Caldwell told me via email. “I wanted to find videos that would compliment my words and the way I said them.”

Which lead her to Fabrizio Villalpando, the creator of the cooking videos. The 23-year-old Los Angeles resident has been making his videos for only about two months.

“So DC made a duet of one of my cooking TikToks for the first time about a week ago,” Villalpando, whose Instagram handle is @theemoodyfoody, told me via email. His own Instagram following has likewise tripled with more than 33,700 followers as of publication. “I commented on it by saying how much I loved it, honestly she made my heart burst with joy and I love however since then she’s been making a duet every time I drop a new video. I always look forward to her narrating my cooking — she’s a gem.” Such a gem that she comes up with the wording in her videos on the fly.

“I come up with my videos by watching them at least once or twice and just going off the top of my head, freestyling,” Caldwell told me. “I feel as words should just flow, and for me they do.”

Both Caldwell and Villalpando hope this virtual recognition can lead to bigger career moves for them.

“It brings me so much joy when people tell me how soothed and stress relieving or inspirational my videos are for them,” Villalpando told me. “I hope to turn this passion into a career. Also, would be nice to end up on Selena Gomez’s new HBO cooking show. Shouts out to you Selena, let me cook you dinner sometime.”

“I want people to know that it’s ok to be you,” Caldwell, who aims to be a professional narrator, comedian, and voice actor, told me. “The people who are for you will be for you. And when they mention my name with the MISSISSIPPI GREATS JAMES EARL JONES and MORGAN FREEMAN, pass the torch to me Dana Caldwell, Dayne_n_Simple.”