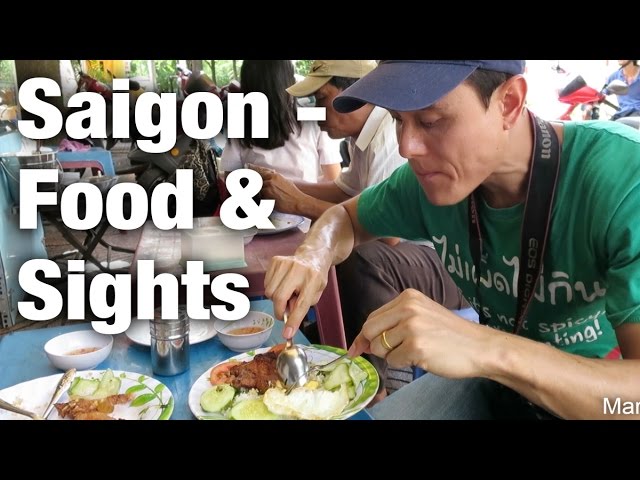 I was attempting to go to the extremely famous Bánh Mì Huỳnh Hoa (Banh Mi Huynh Hoa), but somehow I missed that they were only open beginning in the afternoon, so instead I found another banh mi restaurant called Bánh Mì Hồng Hoa, which actually proved to be one of my favorite versions of the trip (I did end up going to Bánh Mì Huỳnh Hoa (Banh Mi Huynh Hoa) another time, so another video about that coming soon). But anyway, I ordered the normal special banh mi, a Vietnamese sandwich stuffed into a crusty baguette, and it was incredibly good. The bread was crusty and fresh, and they included just the right amount of toppings and ratio of ingredients. Happy full of the banh mi for breakfast, we then continued walking, and next stopped for a cup of Vietnamese coffee, which always hits the spot.

One of my goals for visiting Saigon (Ho Chi Minh City), was to film a video about the top things to do, the attractions of the city. So after we ate breakfast, we then took a walk over to the Cathedral of Notre Dame, sort of in the main center of Saigon. The cathedral is a beautiful structure, and I did some filming and videos of both inside and outside the church. Right across the road from Notre Dame in Saigon is the Saigon Post Office, which I had actually visited the day before.

Next stop, we headed to the War Remnants Museum of Saigon, a museum in the central area of the city that showcases displays of mostly photography depicting the horrible acts and results of the Vietnam War. It definitely wasn’t a light museum, and nor was it much fun to visit, but it did offer a glimpse into the terrible events. After the museum, we then went to Tao Dan Park, which is located just across the street, where we just walked around.

After doing some sightseeing in Saigon, we were pretty hot and hungry, so walking around, we found a small restaurant, called Com Tam 77 to stop for lunch. The restaurant was located just on the outside of Tao Dan Park, not far from the Reunification Palace. I ordered one of the most popular Saigon Vietnamese dishes, a dish known as com tam suon, broken rice topped with a grilled pork chop, and an optional, but highly delicious fried egg on the top. The meal was very tasty, and it truly hit the spot.

After lunch, we headed back to the hotel, as the sun was beating down, and it looked like it would rain. I had a chance to do some work, and write some articles and edit some videos, and then we came out again to explore at around 4 pm when it was much cooler. We headed back to Ben Thanh Market, the central main market of the city, before moving outside, walking around for a bit more, and then finally finishing the great day off with a meal at a kind of chain restaurant in Saigon known as Pho Hung. It was nice to get some AC and cool off, and I have to admit that my bowl of pho bo, or Vietnamese beef pho was actually quite good.

I hope you enjoyed this video blog about traveling, eating, and visiting some attractions in Saigon (Ho Chi Minh City), Vietnam. Please give it a thumbs up, and I would really be grateful if you would share this video with a friend!