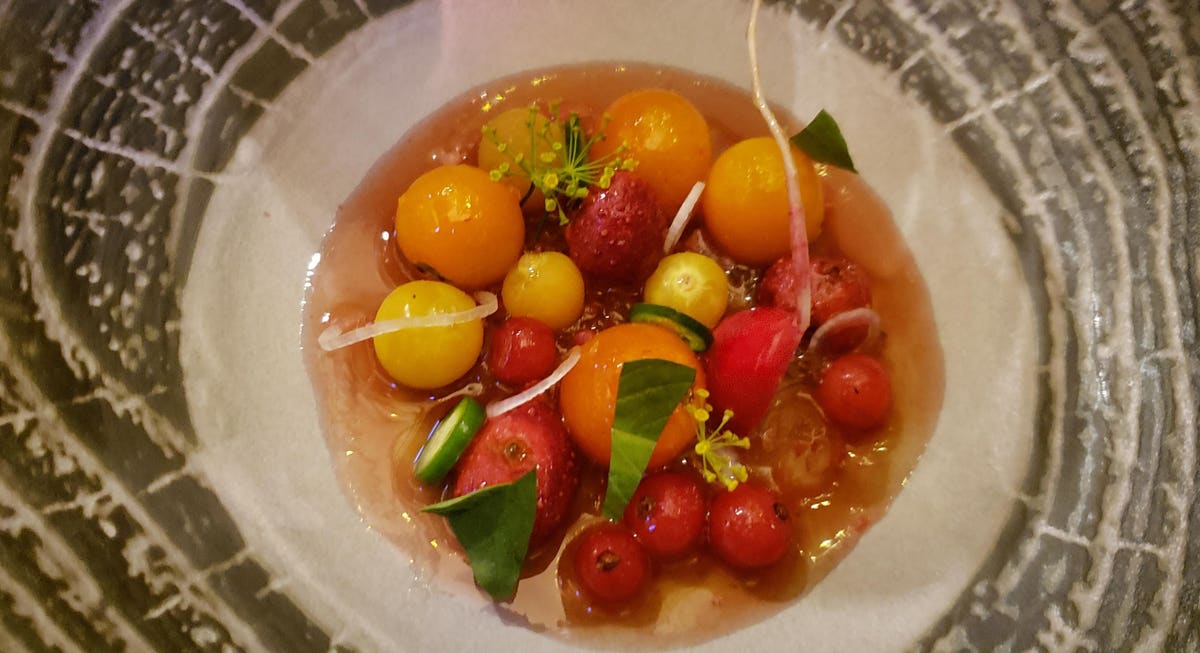 Given the unsure status of indoor dining in New York, the restaurants that could spread into outdoor dining on sidewalks and the street. But most abbreviated their menus and veered into more casual terrain. Luthun in New York’s East Village is the rare one that didn’t, continuing to serve its complex, labor intensive, fusion of European and Asian flavors tasting menus, one six course, one ten, on the street. For those interested in trying to recapture the fine dining/special occasion experience such as the birthday celebration taking place at the table on the other side of the partition the night I was there, it’s a prime place to do it. And the offerings are vivid and delicious.

Chef/owner Nahid Ahmed was born in London, raised in South Africa, India and Bangladesh and clearly influenced by those countries’ cuisines in the lively colors and spices in his dishes. He was also a disciple of the late master chef Gray Kunz and adopted many of the Asian flavors in the dishes Kunz presented, working alongside him in his New York restaurants Lespinasse and Café Gray along with Café Gray in Hong Kong. The rest of his culinary history reads like a Who’s Who of marquee names including stints with Heston Blumenthal at The Fat Duck and Ferran Adria of El Bulli. But the name of the restaurant reflects another influence: it’s named for his mother, known for her cooking, whom he lost when he was seven.

Both menus start with a fushka, a bite sized, crisp Indian snack with carrot, the Asian citrus fruit calamansi and sugar snap peas and continue with a cavalcade of dishes that seem primed for Instagram but are definitely not looks only. Among the standouts the night I was there were combinations of bass, green tomato, shiso and pineapple, a selection of ripe summer tomatoes with salted plum, rose and Riesling, mussels with Nuoc cham, the Vietnamese dipping sauce composed of fish sauce, water, sugar and citrus, cured yolk and turnip and monkfish with green curry, jackfruit and crispy rice. They’re orchestrated carefully, to enliven your taste buds without blowing them up. And the menu changes depending upon what’s in the nearby Union Square Greenmarket or in cooler months, what they’ve preserved and stored during the summer. This year, whether that will continue indoors should be known within the next few weeks but this arrangement on the sidewalk will go on through the end of October.