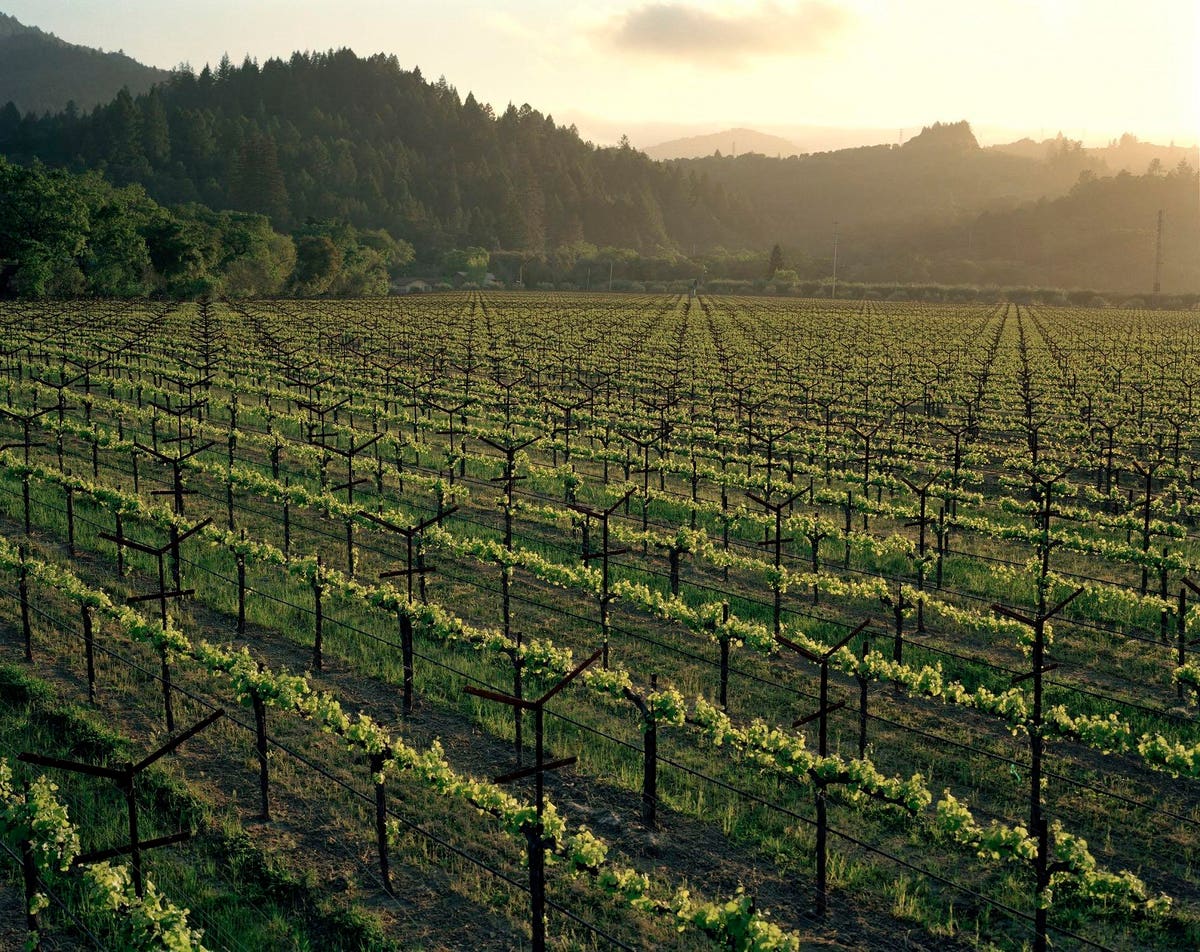 What makes a wine truly great? It’s an especially difficult question to answer in the United States. Not only are we a relatively young wine-making country, but we don’t have the same ranking systems that France, for example, has relied on for so many generations.

Burgundy, of course, has a well-established hierarchy of vineyards: Grands Crus, Premiers Crus, and so on. And while several different producers make wine from fruit grown in, say, the Grand Cru vineyard of Musigny, they all express, one way or another, the majesty of that hallowed land. In Bordeaux’s Left Bank, it’s the châteaux themselves that are ranked, and the most in-demand there remain the four that earned First Growth status in the famous 1855 classification, plus Mouton-Rothschild, which was elevated to First Growth more than a century later.

But in the United States, there is no such formal ranking or hierarchy to go by beyond reputation, price per bottle (always a questionable method of discerning quality), and how desirable a particular bottling may be. In other words, considering quality has to be all about the liquid itself, vintage after vintage.

I bring this up because I’ve been tasting a great deal of fantastic wines these past several months (one of the precious few benefits of the current situation), and it’s become clear that just like the best of France, Italy, Australia, Argentina, and elsewhere, the greatest wines of California are deeply tied to their place of origin, age gracefully and with a relative sense of predictability, and are crafted in a style that’s consistent with the guiding principles of the estate while also leaving room for the natural variations of vintage.

Earlier this summer, I had the remarkable opportunity to taste through 10 vintages of Spottswoode Estate’s Cabernet Sauvignon with President and CEO Beth Novak Milliken and Winemaker and Vineyard Manager Aron Weinkauf, and came away with the impression that, by any metric, they rank among the greats anywhere in the world. From more challenging vintages to those special years when Mother Nature takes it easy on growers and winemakers, the wines spoke, in reliably delicious yet never flashy or overly obvious terms, of the uniqueness of the St. Helena estate where they’re grown.

Spottswoode isn’t a terribly old property: The first vintage released by founder Mary Weber Novak was the 1982 (though she and husband Dr. Jack Novak purchased the property 10 years earlier, and its roots go back to its founding in 1882 by George Schonewald). By comparison, Lafite traces its history back to the 13th century. But Spottswoode’s influence and consistency are impossible to overstate. And while their flagship bottling may not command the four-digit prices that, say, Screaming Eagle does, among collectors and wine professionals, it is a deeply respected benchmark that has become an icon in its own right.

Centered on the 46-acre estate vineyard in Napa Valley’s St. Helena AVA, the land was the first Napa Valley estate vineyard to be farmed organically, since 1985—the next was in 1988—and certified organic since 1992. The nature of that land (primarily alluvial clay loam) and the work that the Spottswoode team does to preserve its health and make the most of it, have borne incredible fruit (both literal and figurative) ever since.

The current release, the Spottswoode Estate Cabernet Sauvignon 2017, has been widely hailed as a classic, and is one of those wines that is perfectly balanced and exquisitely delicious already, yet has another several decades of life left in it. Aromas of sage, forest floor, currants, blueberries, pencil shavings, and violets are lifted and utterly beautiful, and the palate is pure perfection: Balanced and concentrated with currants, blueberries, black raspberries and gobs of mixed cherries, sandalwood, incense (especially on the finish), cedar, orange oil, and dark chocolate. It wasn’t an easy vintage by any stretch—and not just because of the fires that year. After Labor Day, Spottswoode experienced 10 days over 100 degrees, including one that hit 117 Fahrenheit. Harvest “felt more like triage,” noted Weinkauf. Fortunately, explained Novak Milliken, the chemical-free farming and biodynamic techniques “really seem to be building in some resilience, some integrity, into the land.” She added that, “there’s just a resilience in the vineyard that allows it to weather these extremes,” which to me seems like it will be a defining factor in any top vineyard’s greatness moving forward, as extreme weather and climate shifts continue to impact the growth and rhythms of wine grapes.

The rich 2016 boasts kirsch-filled dark chocolate truffle aromas joined by cedar, black licorice, and violets that all precede a velvet-textured palate gushing with fig paste, Marmite, blood orange, blackberry coulis, melted dark chocolate, black cherries, and fresh-cut cedar. In 2015, Spottswoode contended with a severe draught, which resulted in the lowest-yielding vintage they had seen in the previous decade. The situation was “weird and unsettling,” recalled Weinkauf, “and I think I spent the rest of the vintage anxious about it.” He had nothing to worry about: In the glass, now five years after the fact, the wine is balanced, long, elegant, and subtly powerful, with aromas of herb-tinged and slightly meaty cherry skin, raspberries, mixed cherries, and whole cloves that set the stage for a palate of taut structure and concentration that promises decades of evolution. Already there is a sense of tobacco leaf and cedar-lined humidor, sage, oregano, pencil led, and sandalwood.

The 2014 expresses how Spottswoode is working to achieve a razor’s-edge sense of balance in their wines. “Picking earlier and earlier…and making sure there are grapes that I’ll appreciate for their acidity,” is a focus, explained Weinkauf. Once he’s achieved that, he can add in richer fruit from there. Novak Milliken explained that this renewed focus on freshness is a result of the fact that some of their wines, earlier in the 2000s, got a little riper, and showed that way in the glass. And while they have aged well, 2009 was a turning point, after which she and Weinkauf agreed that less ripe wines with a bit less alcohol were more representative of the Spottswoode Estate itself. So they began focusing on a fresher style, which the 2014 embodies, with wild blackberries, hints of currants, wild herbs, and a deliciously savory saline note subtly lifted with flowers on the finish.

Weinkauf and Novak Milliken described 2013 to me as fairly moderate and a bit cooler around harvest, and the evenness of the vintage shines through brilliantly in this wine that’s just starting to show the first inklings of what it will become in its more mature years. Dried orange peel, star anise, sumac, and clove dance alongside cherries and roll into a palate of clove-spiced black cherry liqueur, candied violets, and a hint of rose water on the cardamom- and cinnamon-flecked finish. There’s wonderfully juicy blue and purple fruit here, and this promises to keep on getting even better in the coming years.

2012, on the other hand, shows more minty and balsamic notes, with cherry skin and distinct cedar aromas, all preceding a palate of presence and elegance, with a dance between acidity and minerality as well as cherry pit and a hint of sesame paste on the finish. Beautifully integrated yet assertive tannins frame ample minerality, rooibos tea, raspberries, and a savoriness that evokes pine resin and salinity. Weinkauf describes this vintage as “so pleasant and enjoyable and easy going.” I wholeheartedly agree.

The 2011 “is kind of a game changer,” explained Novak Milliken, “where it was kind of a, ‘Wow, look what happens in these cooler years, and look at how interesting it is. Let’s not be afraid of this.’” She’s right: This is a lovely, maturing bottle of almost minty freshness that turns to chamomile with air that is joined by brambly and red-berry fruit, apple fritters, brown spice, toasted fennel seeds, oolong tea, and cedar and cigar tobacco. “I love its freshness, its energy,” Novak commented. The 2011 is a great example of what sets the top producers apart in a challenging year, and for Novak Milliken, “It’s almost more meaningful” to make something great in a vintage when you’re not expected to, as was the case with 2011.

2010 represented an important vintage for Spottswoode, as it was their first to earn a prestigious 100-point rating from the critic Robert Parker. Yet Novak Milliken took that in stride: “Ideally, a good score is a confirmation for someone who already [bought it and] made a good decision…as opposed to a reason to buy.” Whoever did buy it made a wise choice: It’s stunning, with sweet spice, plum cake, blackberry, bouillon, and a touch of meat, as well as a hint of herbaceousness alongside the ripe, sweet plums, fig cake, and kumquat, layered with red tea, espresso oil, walnuts, and tobacco. The long finish is kissed with rose petals and eucalyptus, as well as a deeply savory soy note. You can really see where it came from, and also where it is going.

2006, on the other hand, while it’s fantastic right now, wasn’t always so giving. Weinkauf described it as awkward and clunky in its youth, and told me that it only started to come out of that phase three or four years ago. “We often think about things either being present or not being present, and I think with wine they’re always present,” he noted. But in the beginning, he said, “the tannins were giving the marching orders…and it wasn’t until they started to release their baby grip” that the wine was able to truly shine and express itself. Today, it’s a deeply regal wine, with magnificent aromas of mashed pistachios, cedar, spice cake, singed mint, and currants that precede a velvety palate that rolls over the tongue with notes of mountain berries, sarsaparilla, orange conserve, Vegemite, aged cigars, and something suggesting sesame paste through the finish.

The 2001 vintage is a look back into Napa’s iconic history: It was grown and made by Rosemary Cakebread, and even today, it remains one of Novak Milliken’s favorites from the property, alongside the likes of the 1987, 1995, and 1998. “It somehow represents the power that the soil has,” she said, and the site’s ability to survive through droughts. “It’s always shown really youthful and vibrant, with plenty of energy.”

Now, nearly two decades after the grapes were harvested, the 2001 is explosively delicious, with great tension and acidity, aromas of eucalyptus and balsamic alongside chocolate-mint leaf, leather, and aged cigar tobacco, and savory flavors of slate-like and almost volcanic minerality as well as flamed orange peel, golden chanterelles, cured black olives, cherry pit, dried currants, and sandalwood, with incense lingering on the long, lifted finish. It’s a wine that proves what Spottswoode’s admirers have known all along: This is one of the great sites in Napa, and a producer that surely ranks among the best in the entire wine world.