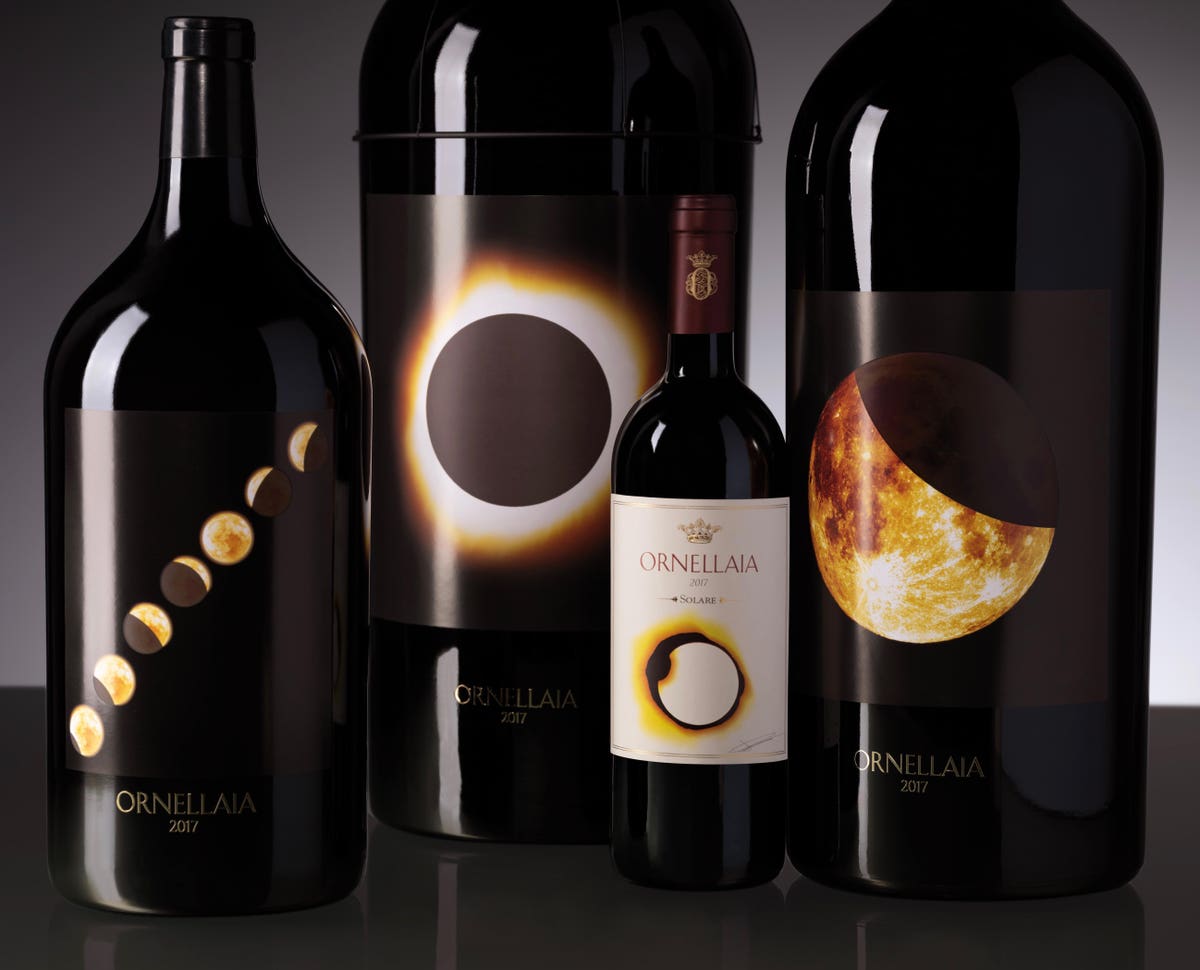 This week, from September 1st through 9th, the great Ornellaia estate is hosting its twelfth annual Vendemmia d’Artista auction. It’s being hosted in conjunction with Sotheby’s, with proceeds, for the second year in a row, benefiting the Solomon R. Guggenheim Foundation’s “Mind’s Eye” Program.

Unlike the galas of previous years, however, the pandemic has forced the auction to go entirely virtual in 2020: It will occur over the course of nine days, during which 12 lots of Ornellaia will be available in various sizes and configurations including the collectible Vendemmia d’Artista bottlings. Some of the lots also include additional perks, among them private dinners at top restaurants around the world, Guggenheim global membership, and even an overnight stay and harvest experience at the Ornellaia estate itself, in Bolgheri.

The Vendemmia d’Artista is an annual program for which a single artist with significant international renown is brought on to interpret the nature of the vintage—the characteristics are enumerated by Estate Director Axel Heinz—through unique label and sculptural artwork.

This year, the Argentinean artist Tomás Saraceno created a special thermochromic label that changes color from the heat of the hand holding it and adorns a single bottle in each special wooden box of six (the other five will have the traditional Ornellaia label). These are in addition to the lots being auctioned this week, as well as 111 Saraceno-signed large-format bottlings, including the largest lot of the auction, a nine-liter Salmanazar that’s topped with a sculpture inspired by the full-sized installation that will be placed by the artist at the Bolgheri estate itself.

The theme for the 2017 Ornellaia Vendemmia d’Artista is “Solare,” which translates as “radiant” from the Italian. It’s an accurate word for a wine that practically shimmers on the palate.

2017 was marked by its share of challenges. According to Heinz, insufficient rain in the winter followed by rare “winter frost [and then] dry conditions [and] very sunny and hot weather” led to a decrease in both the volume of crop harvested as well as a shrinking in the size of the individual berries. As a result, Ornellaia’s total crop size was between 25% and 27% smaller than it usually is, though their production of the flagship Ornellaia Bolgheri DOC Superiore was only down around 17%, which means that a relatively significant proportion of the fruit was of a high enough quality to go into the top bottling—a testament to the decisions that were made throughout the growing season, and to the fact that Bolgheri’s soils tend to withstand dry conditions notably well. “Everything had ripened quite harmoniously together,” Heinz explained, “clearly with a high degree of concentration,” but with enough structure and acidity to result in an impeccable sense of balance.

In the winery, Heinz told me, managing the tannins was his greatest challenge. He quickly realized that in order to fully express the concentration and generosity of the vintage without overwhelming the wine with tannins, a “really gentle and slow extraction” was key. “We’ve never gone through so little extraction and so little work in the winery as we did in 2017,” he explained, adding that, “2017 was really all about putting the brakes on and avoiding extracting huge masses of tannins.” A relatively “hands-off approach,” he decided, was the way to go.

He was exactly right, as the wine itself beautifully demonstrates. (My tasting note is below.)

As for the “Solare” moniker and Vendemmia d’Artista collaboration, Saraceno is an ideal artist with whom to collaborate, since his work tends to focus on sustainability and the ways in which humans impact their environment. The thermochromic label echoes this concept in an immediate and tactile fashion.

The sweet generosity of the plum and black cherry fruit is immediately apparent on the nose, and joined by sweet spice, figs, a touch of melted black licorice, and a subtle pulse of forest floor. On the palate, this is plush and rolls over the tongue in a wave of spice cake, cassis, cobbler shell, and subtle notes of plums, black figs, licorice, a hint of violets, and blackberries, as well as toasted fennel seeds, espresso, and a hint of black tea and gently salted blood orange on the finish. It’s great already, exceptionally generous, and promises several decades of evolution in the cellar. SRP: $260

Generous aromatics dripping with plums, brambly berries, sweet spice, and chocolate turn to a palate of ripeness and structure, with mineral notes to the tobacco-tinged cherry pits, black plums, peppercorns, and a subtly meaty note alongside cedar, spice, and mineral on the finish. Drink this now or hold for another decade and a half. SRP: $82

Plush yet full of energy, with honeyed white grapefruit, a suggestion of tarragon, and a bit of fennel bulb and orange blossom all setting the stage for a wine of real savoriness and energy, with a rich yet mouthwatering palate showing almond blossom, lemon zest, chamomile, and nectarine, with mineral down the spine and a hint of saltiness on the finish, begging for food. SRP: $82