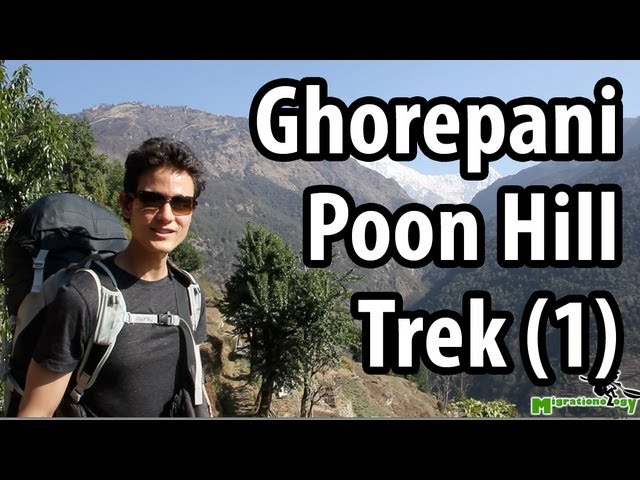 Nepal was truly an amazing country, and part of the reason I visited was to do a trek in the Himalayas, a dream of mine. So after spending some time in Kathmandu, we took a bus to Pokhara in order to check out the situation and arrange our Ghorepani Poon Hill trek in the Annapurna mountain range, located just an hour drive from the city of Pokhara.

We started things off by first taking a taxi from Pokhara to Nayapul which cost 1500 Nepali Rupees. This is a popular starting point for the hike and there were several other groups also beginning. Our first day we trekked from the town of Nayapul to the town of Tikhedunga. For most of day one, we walked along a gravel road, passing villagers, homes, and farms along the way. We took a break to eat lunch, and I ate something known as dal bhat, which is rice with mixed vegetables and dal soup. As we continued to hike, the views became better and better, but nothing compared to what we’d see in the following days. We finally arrived to Tikhedunga, and our small guest house was located at the top of a small hill, next to a stream. It was a beautiful quiet location and the atmosphere was amazing, as was the fresh air. For dinner that night I enjoyed a plate of rice accompanied by a can of fish which I had brought and a plate of fried noodles.

On day two of the Ghorepani Poon Hill trek I woke up early and ate breakfast. In order to save money, I had brought some bags of muesli, which is very cheap to buy in Pokhara or Kathmandu. I also purchased a cup of chai from the guest house. After a lovely breakfast we continued hiking the trail en-route today to Ghorepani, the town at the peak of our trek. The trail was gorgeous and we climbed up and up and up, taking frequent little breaks to drink water and to chow down on power snacks like peanuts and some chocolate. For lunch we took a break at a local restaurant where I ordered dal bhat along with some delicious buffali sukuti, dried meat. It was pretty delicious and some needed protein. The views were absolutely marvelous, and the highlight of the day was catching the first glimpse of the ice covered Himalayan peaks of Nepal! On day two of the Ghorepani Poon Hill trek, we arrived to Ghorepani extremely tired, hungry, and cold. We checked in to our guest house, showered, put on our warm down jackets which we had rented, and then enjoyed sipping on hot cups of tea by the fire. It began to hail and snow, but we could still see the unbelievable views of the Annapurna mountains. We decided to sleep quite early as the next day we were going to wake up early in the morning to climb to the top of Poon Hill for the sunrise view of the Himalayas.

Hope you enjoyed part one of my Ghorepani Poon Hill trek video, be sure to now watch part two for the conclusion and lots of stunning scenery.