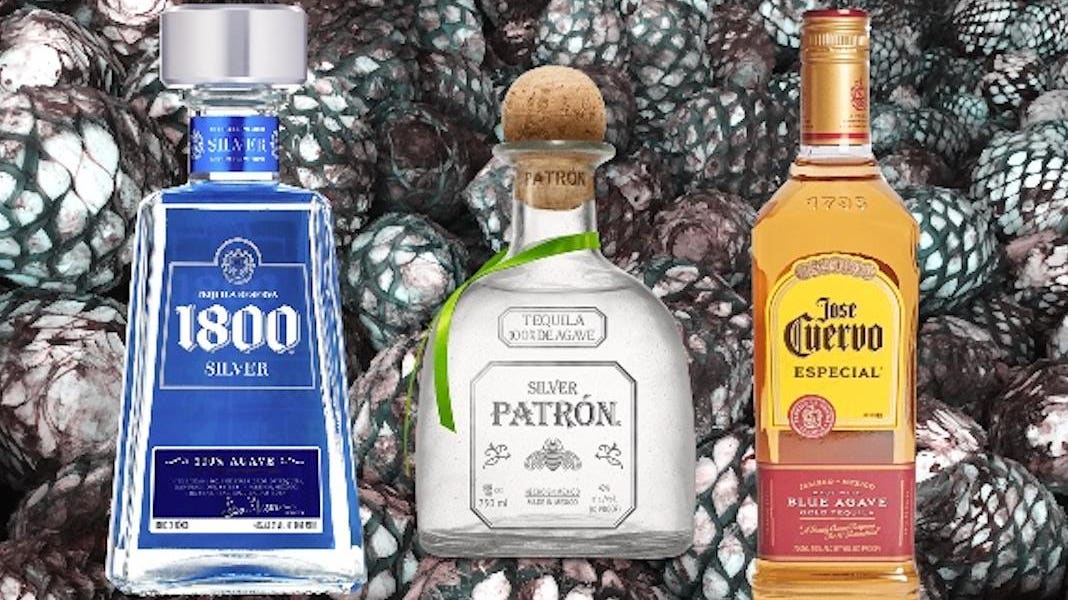 We sure do love our tequila in the US. Since 2002, sales volumes here have soared 180%. That’s an average rate of 6.2% per year, according to the Distilled Spirits Council. And it’s not just the States consuming more of the liquid. Throughout the 21st Century it has assumed its position among the most widely consumed liquors on the planet.

A big part of that ascension was shedding the label of “party spirit”. It’s a reputation born of some of the lower-end ‘mixto’ offerings, which actually only have to use 51% agave. The rest can include all manner of filler. Its the sort of sugary stuff that can often result in nasty hangovers. In recent years, however, 100% blue weber agave has become increasingly in favor. Premium brands have ridden these evolving preferences to the top of the category.

Here’s a brief rundown of the world’s 5 best-selling brands, as measured by IWSR—a London-based firm specializing in drinks market analysis. Even if you’re quite familiar with tequila, you can expect to be surprised by a few of the names on the list.

Located in the actual town of Tequila, Sauza traces its routes back 147 years. Founder Don Cenobio Sauza is often referred to as the father of the category. He was the first distiller to name agave distillate after his hometown, and also its initial exporter to the US. Today the company is owned by Beam Suntory and its most popular labels include his eponymous, un-aged Blanco as well as the 100% blue agave offerings from the Hornitos line.

Don Julio bills itself as a ‘luxury premium tequila’ and its price points back up the assertion. The most modestly-priced Blanco typically retails at around $50 a bottle. Although the notable highland producer has been in business since 1942, its presence on American shelves really ramped up after its acquisition by Diageo six years ago. The spirits giant actually traded ownership of Bushmills Irish whiskey to Jose Cuervo’s parent company in exchange for the brand (and a reported $408 million USD). Don Julio 70 is the first ‘cristalino’ marketed in the US—aged for a minimum of a year before proprietary filtration strips it of all barrel-born coloring.

This brand, owned by the same family responsible for Jose Cuervo, is named after the year in which tequila was first aged in oak. Launched as one of the world’s first ‘sipping tequilas’ back in 1975, its most widely consumed expression today is its Silver—which never spends any time in aging in wood. Despite its endearing drinkability, it holds onto a robust earthiness.

Co-founded by John Paul DeJoria (of Paul Mitchell fame), Patron enjoys an impressive market share known by few other brands on the planet. It is estimated that 4 out of every 10 bottles of premium tequila purchased globally is one of its bottles. Since 2002 it has been producing its high-end liquids out of a highland distillery it built from the ground up. Two decades worth of rapid growth and dedicated reinvestment paved the way for a stratospheric evaluation. In 2018 Bacardi bought them out for a reported $5.1 billion.

The Cuervo (now Beckmann) family doesn’t just sell the most tequila in the world, they’ve also been doing it for the longest. In 1795 José María Guadalupe de Cuervo was granted a permit by King Carlos IV of Spain allowing him to commercially produce what was then known as mezcal wine. Today, roughly 1/3rd of all tequila sold globally brandishes the name ‘Cuervo’ on the label. Despite the newfound proliferation of higher-end expressions (such as the elegant, cognac-like, Reserva de la Familia Extra Añejo) the lion’s share of sales belongs to Gold, as well as Especial—mixtos that allow for the addition of non-agave distillate in the final blend.