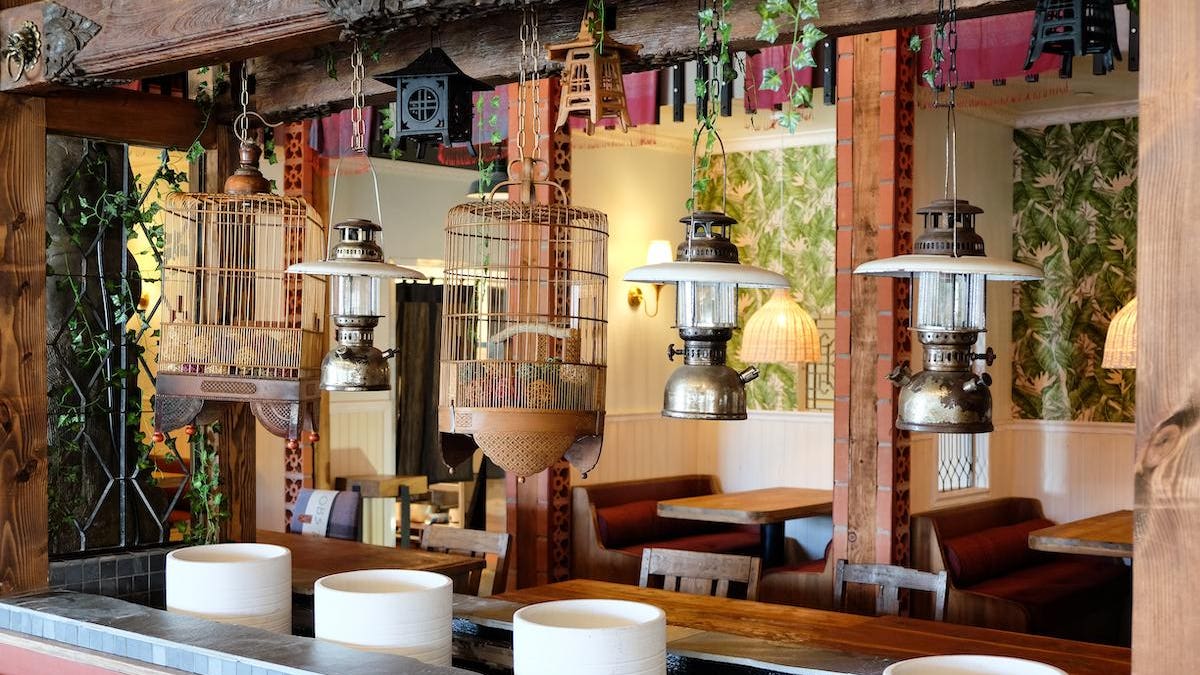 One minute you are standing in front of a takeout counter dreaming of Pho.

The next minute, a heavy antique door, made of hand-carved wooden panels once used to construct a wealthy Balinese home, swivels open to your left.

Lured from Qing Mu, you walk through the door entering the wonderland that is 1938 Indochine.

An unforgettable journey is about to unfold.

Our story starts in Tokyo on the heels of World War II.

A Japanese merchant and chef named Yunosuke Aoki returns to the city with his wife and child, after a year fleeing U.S. bombings, to find his home decimated.

As Aoki walks the streets looking for answers he finds it lying in the debris: a red safflower, or, in Japanese, benihana.

The year is 1945. Benihana opens as a humble coffee shop. Due to Aoki’s ingenuity and work ethic it succeeds, quickly upgrading to a full-service restaurant, despite Tokyo’s grim post-war landscape.

Hiroaki, now famously known as “Rocky,” approaches Manhattan with his father’s same drive and ambition. He earns a business degree at New York Community College, operates a profitable ice-cream truck and works entry-level restaurant jobs, until he has enough education and money to open a restaurant of his own.

In 1964 Benihana debuts in New York City. Rocky is the first to introduce teppanyaki grills and a cook-in-front dining style to America.

With the help of his father, he designs an experience that combines American food with Japanese ingredients and French sensibilities. The coursed-out menu includes Japanese-style French onion soup, a tossed green salad with ginger dressing, seared shrimp appetizers and grilled steak entrees. Guests watch in awe as their Japanese chef, donning a red French toque, catapults shrimp into the air and constructs steaming volcanos from stacks of thickly sliced yellow onions.

After a shaky start and a life-changing food review the 4-table restaurant eventually takes off and expands to over 70 locations. The rest is Benihana history.

Rocky lived an extraordinary life before passing away in 2008.

Who else could say they had a rock band, became an olympic-level wrestler, published a pornographic magazine, was the first to take a hot air balloon ride over the pacific ocean, popularized Japanese food in America, were prosecuted for insider trading and fathered seven kids by three different women all in one lifetime?

Kevin Aoki can say that about his father.

After learning about the hospitality business by way of Benihana, Kevin now owns a restaurant empire of his own.

Aoki Group comprises Aoki Teppanyaki in Miami; Doraku – which has four locations: two on Oʻahu, one in Miami and one in Atlanta; Qing Mu – Chinese for Aoki – A Vietnamese noodle shop located in Atlanta and Oʻahu; two franchises of Blue Tree Cafe – English for Aoki – both located on Oʻahu; and 1938 Indochine – the year Rocky was born combined with the geographic location that defines the restaurant’s identity.

One may think Kevin is the heir to the Benihana fortune. And one would be wrong.

Rocky may have taught his son everything he knew about the restaurant business, but knowledge was all he passed down.

Despite being left out of Rocky’s will, Kevin is grateful.

“Iʻm thankful to my dad for teaching me everything,” he said. “At the end of the day it’s his money, his decision, his life. And all of us kids have struggled and achieved things because of it.”

Pointing to a photograph of Rocky, taken just after floating from Nagasaki, Japan to Mendocino, California in a hot air balloon, Kevin smiles recalling his dad’s motto, “If you’re afraid to die, you’re afraid to live.”

Back in the early 60s when there was a lot of prejudice towards Asians in America, Kevin said his dad’s thought was, “I’m just going to cook American favorites, no one’s gonna want slimy raw fish or Japanese stuff, so I’m going to make steak, chicken and shrimp, put a little soy sauce on there and throw it in the air.”

This may have been inspired by the fact that Yunosuke Aoki used to toss hamburger patties through the air and play American jazz music at the original Benihana in Tokyo.

Kevin created a similar concept with Aoki Teppanyaki. His version of Benihana also aims to educate Americans about Japanese culture and cuisine.

“Since the kids on my side didn’t inherit my dad’s restaurant chain we decided to make our own,” Kevin said.

But Japanese food is not the only cuisine Kevin wants to educate American diners on.

Which brings us to 1938 Indochine.

Here, the ambiance is the show.

Indochine – French for Indochina – is a term used to describe the region more commonly referred to today as “mainland Southeast Asia.” Myanmar, Thailand, Laos, Cambodia, and Vietnam – once heavily influenced by India and China and later colonized by France, Great Britain, Spain, the Netherlands, and the United States – comprise this region.

Everyone has different perspectives regarding the effects of colonialism in Southeast Asia. For better or worse it has shaped how we see these countries. These layers of culture intertwine at 1938 Indochine. The architecture and furniture whisper European imperialism, while floor-to-ceiling accents spotlight Asian artwork and craftsmanship. There is also a heavy hand of Indonesian influence.

On the ground floor, inside a lively courtyard atmosphere, one can gaze up at the long, red curtains––made from Thai silk scarves––swaying from the 2nd floor and fantasize a high-end Thai massage parlor hiding behind them. But an insider’s tip would inform you that instead, a cozy colonial-inspired lounge awaits, with a whisper of a password through a tiny, latched window.

Inside the charmingly handsome speakeasy bar, hard-to-find whiskeys are the boisson du jour including Pappy Van Winkle 23-year, Yamazaki 25-year and Redbreast 27-year. Kevin even pours his own playful whiskey brand called “Brothers” labeled with a photo of him and his brother with the tagline, “They grow up so fast.”

The speakeasy walls are lined with old photographs and political propaganda posters. Some are from his dad’s collection, others are from Shepard Fairey’s collection – the American street artist Kevin has been following since he was a kid.

One photograph displays Elvis shaking hands with the king of Thailand. Another one, taken around 1920, is a portrait of Kevin’s merchant grandfather, Yunosuke Aoki, sitting beside Kevin’s aunts, uncles and great grandfather – the last samurai of the Aoki family. Its profound significance depicts a time when Japan’s ruling class shifted from samurais to merchants introducing capitalism – the foundation upon which Kevin’s family’s success was built.

The restaurant is truly a timeline of Kevin’s travels and tributes to his dad – who did not live long enough to see any of Kevin’s ventures.

For authenticity, Kevin traveled Southeast Asia for three years shipping treasures back and designing the restaurant on scratch paper in the backseat of rental cars.

“There’s not really one item in this restaurant, except the bones of the construction, that wasn’t sourced from Southeast Asia,” he said.

“We are trying to bring the outside in.” Kevin explained.

“When you’re in Southeast Asia there’s flies everywhere … critters … and it’s cool and it’s fun, but then to make it civilized and comfortable how do I do that indoors?” Kevin thought.

The restaurant is so transportive you almost want to keep an eye out for a falling durian or swinging monkey.

In a past life Kevin was a sculptor. He graduated from New York University with a business degree instead of a fine arts degree, because it was the only way his dad would pay for school.

His love for repurposing old things shows he is still an artist at heart.

What is even more exciting than the details of his design are the stories of each detail.

A gargoyle-looking table base looks intriguing, but has no meaning until you learn that these statues belonged to Rocky and used to scare Kevin as a kid.

A scattering of antique motorbikes underscore the restaurant’s Asian street food theme and point to a time when Kevin and his dad raced together. He remembers Rocky bringing two pocket bikes back from Japan when he was 12 years old. Kevin loved racing them and eventually went on to participate in Motocross and join The Mods–a fashionable subculture of troublemakers on vespas.

After getting into too much trouble Kevin’s mom sent him away to military school. When he returned four years later his mom had given away all of his bikes and vespas.

The collection you see, which includes a 1971 Honda CL350, 1965 Vespa Rally and a chopper style Honda CB350, is what he always dreamed of owning as a kid.

Once you sit down to eat, you can choose from a selection of street foods from Vietnam, Thailand, Cambodia, Indonesia and Laos, and cocktails that play off them.

You will definitely want to add Crazy Burma-Style Fried Rice with its alternating granules of steamed and crispy jasmine rice, chunks of succulent pork belly and crunchy vegetables to your order.

For libations, blue Empress Gin turns purple with the help of a squeeze of fresh lime, Orgeat, and Elderflower liqueur in a cocktail called: The Empress. And the Ginger Old Fashioned replaces sweet cherries with sweet spices and a hint of Absinth to punctuate ginger-infused Old Forester Whiskey.

The flavors of toasted garlic and shallot bits, salty Phu Quoc fish sauce and tart lime juice dance on your tongue as you enjoy friendly, professional hospitality while soaking in magnificent surroundings.

1938 Indochine may not have comedian chefs making heart-shaped piles of rice, but Rocky’s spirit and the respect for what he built is as present as Kevin’s love for creating an unforgettable experience.

So, what is the next chapter for this story?

Well, one of Kevin’s servers is his daughter Noa.