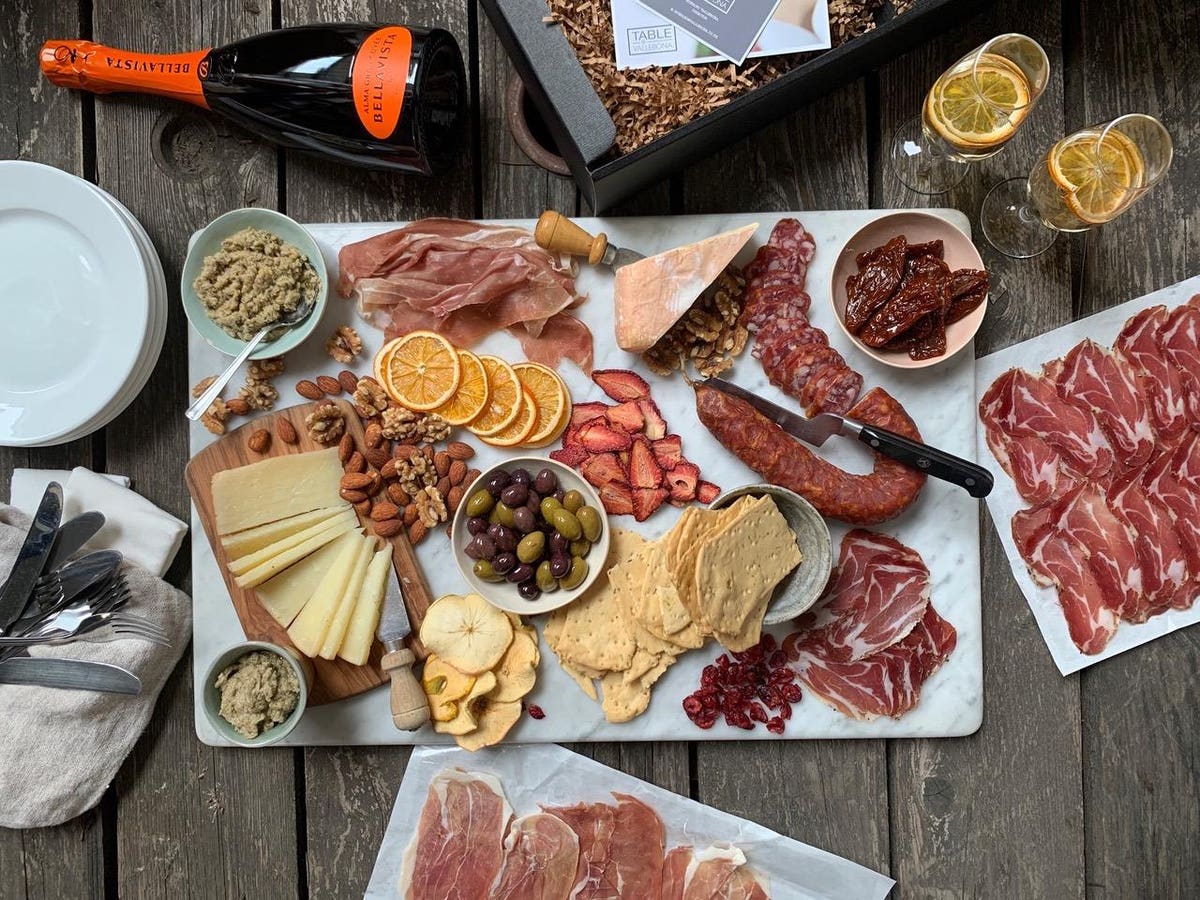 For anyone unable to travel this summer, picnics at home or in one of London’s many parks, provides a treat and a taste of holidays. Sardinian born Stefano Vallebona launched Vallebona grazing box in 1997 when he moved over to the UK. He has been running Vallebona with Naoko, his Japanese wife, ever since. They supply some of the best London restaurants including The River Cafe, Le Gavroche and Bocca di Lupo and they also sell direct to consumers from their Wimbledon-based deli and warehouse. The Vallebona grazing box, available in multiple sizes (from £50), is ideal for picnics. It contains some of Stefano and Naoko’s favorite products like creamy taleggio and crumbly pecorino sardo, ready-sliced prosciutto and coppa, sun-dried tomatoes and crispy Ligurian bread.

Colette, the chic French traiteur and delicatessen in Chelsea, co-founded by Dimitri and Mira Plaquet, has just launched a range of picnic foods served in classic wicker picnic baskets (from £55 including basket). Three picnics are available; one for carnivores, one for pescatarians and the third is a vegetarian option. The carnivore option is exceptional, a really special treat. Ham Hock terrine, sausage rolls, caesar salad, filled baguettes, tomato consommé and lemon cake are among the delicious items included in a selection for two people. Pick up or delivery is free within a four mile radius of Colette. You are certain to be pleased with any picnic from Colette, knowing that the team behind Belgian multi-Michelin starred restaurant group, La Villa Lorraine, led by Executive Chef Chris Hill, have prepared your feast.

Indytute is known for its eclectic offering of classes from origami to harmonica lessons to swing dancing. This summer they’re also delivering full picnics direct to your door, in collaboration with London Kitchen Deliveries. The Tapas picnic for two (£55) will be a great treat for anyone missing out on a Spanish holiday this season. The picnic includes a Spanish tortilla, roasted garlic aioli, a charcuterie box with ham, chorizo, salchichon and manchego cheese, pan con tomate (Sourdough bread with grated fresh tomato and extra virgin olive oil), gildas (traditional Basque pintxo of olive, guindilla pepper and anchovy) and gazpacho. There’s a vegetarian option as well.

For seafood lovers, London Shell Co offers a weekly lovely picnic of fish and wine delivered direct to your door. The seafood selection depends on the weekly catch but a sample picnic box (£55 for two) could include a bottle of The Grand Duchess, English sparkling wine from Hampshire, hot smoked rainbow trout, pepper cured Dorset char and smoked salmon, house pickles, crevettes, plus soda bread and butter.

And to accompany your picnic food, an easy drinking wine is essential. London-based startup NICE launched in 2019 with Pale Rose and Sauvignon Blanc in slimline, recyclable cans (12 cans/£36). Summer 2020 was set to see the launch of an Argentinian Malbec and the trio of canned wines was designed to be consumed at festivals and sporting events. That obviously didn’t happen but the small cans are excellent for picnics or days out at the beach. Don’t be put off by the can; the wines are perfectly drinkable. NICE have also just released Wine For Heroes, a special limited edition bottle (75cl £8), filling 20,000 bottles with some of the Malbec that was destined for cans and donating all profits to NHS charities.